This must be one of the best Tours de France in a long time, not for the nervous, we’ve had it all, scandal, attacks, come backs and epic rides. All that’s left to decide the 2006 Tour de France is 57 km of individual suffering. Lance has gone, there’s a new guy on the block, long live the king!

This is the day we will find out who the successor to “Big Tex” Lance Armstrong will be. As is usual in all these time trials there will be an early leader, then a TT specialist like David Miller, David Zabriskie, Serguei Gonchar or the “old man” Viatscheslav Ekimov will set a top time, but in the words of THE Floyd after winning his big stage, “who cares!” we are only interested in the top three or maybe four.

Oscar Pereiro has 12 seconds on Carlos Sastre and 30 seconds on Floyd Landis, outsider Andreas Kloden has nearly two and a half minutes to make up, but Sastre isn’t known for his prowess against the clock so he had better look out. Then there will be the battle between Cadel Evans, Denis Menchov and Cyril Dessel, a little over a minute separates them and to finish in the top five in the Tour de France looks good on any CV.

The stage is fifty seven kilometers of undulating roads, not easy, but not real hard, the big thing is that its been a hard three weeks, the question is, who has got anything left in the legs? 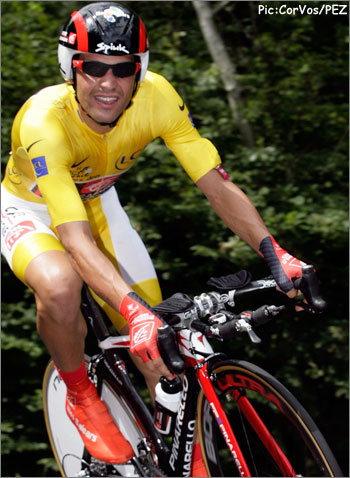 Oscar Pereiro put up a brave fight, but it just didn’t happen today – STILL – 2nd Place overall at the Tour de France!?!?! Give it to me any day.

Early Leader
Serguei Gonchar (T-Mobile) was the first rider to post a good time of one hour seven minutes with all the others three minutes slower, David Zabriskie (CSC) was one of those riders, as was early leader Bert Grabash (Phonak), but it wasn’t Millar time as he took it fairly easy, (maybe top ten) with nothing to prove. Biggish surprise was the little Prince; Damiano Cunego (Lampre) was coming through all the time checks in a good time and holds on to the white jersey – scratch that, that probably ranks as one of the biggest surprises of the Tour: Kid Cunego holds onto White and actually beats Markus Fothen in the TT, incredible. World TT champ, Michael Rogers (T-Mobile) also very tired was not setting the world on fire.

The Proper Action Starts
OK the stars are starting now, all look nervous, all look hyped up. The organizers have changed the gap to three minutes between the top riders. Evans and Menchov are away, now its Kloden, same as Landis he has the start of a goatee beard, is this the big secret of this year’s Tour? Maybe not. Floyd Landis is Mr. Angry, with a look of steel he is off down the ramp with his hands up style, Sastre is calm but collected, last man Oscar Pereiro, the pressure is on, 2.5 million viewers in Spain watched him on terrestrial TV when he took the yellow jersey back from Landis, there’s going to be much more today, so no pressure then! 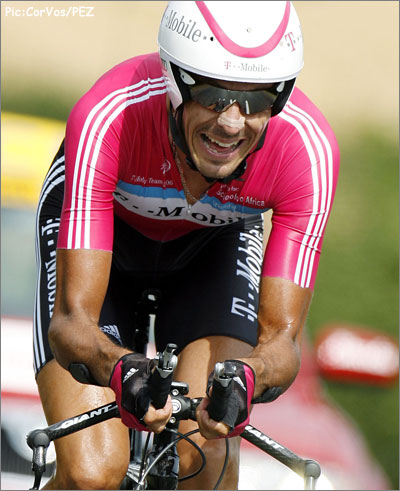 Andreas Kloden was on a mission today – he made up all of the difference to Sastre to swipe 3rd, and nearly took 2nd as well.

Big difference in positions, Pereiro with his hand down and Landis’ hands up, Sastre and Kloden just look normal. Comparing Pereiro and Sastre, Sastre is not taking chances on the bends smoothly pedaling round them as Pereiro attacks into them, brakes, sits up and loses time.

The First Time Check
All are through the 16.5 kilometer time check and Floyd Landis is ahead of Pereiro by only 10 seconds, Pereiro is doing a flier at the same speed as Kloden, Sastre is riding within himself but not in the top five. On the small climbs Pereiro gets out of the saddle where as Landis keeps to his aero position. At the finish Leipheimer comes in six minutes behind Gonchar. 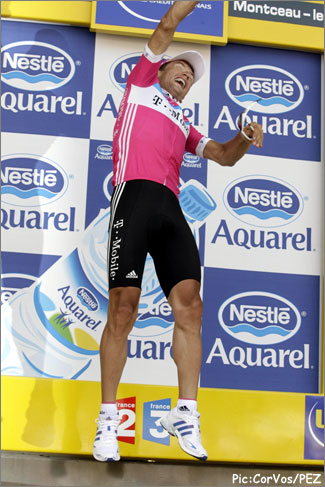 How about that? Two stage wins at the 2006 Tour de France for Serguei Gonchar, take that you youngsters: Boonen, Valverde, and Cunego. 36-years-old and rockin.

The Second Time Check
34 kilometers and Sastre is over two minutes behind Gonchar and could be losing his now third place to Kloden, Landis is in virtual yellow on the road by 27 seconds, but Landis is slowing on Gonchar, although that’s not important now. Landis is in the zone, the eyes are fixed on the road ahead, and he’s going for the yellow, that’s all that matters. Up the road Kloden catches Evans as they cross the finish line, this must put Kloden on the podium at that sort of speed. 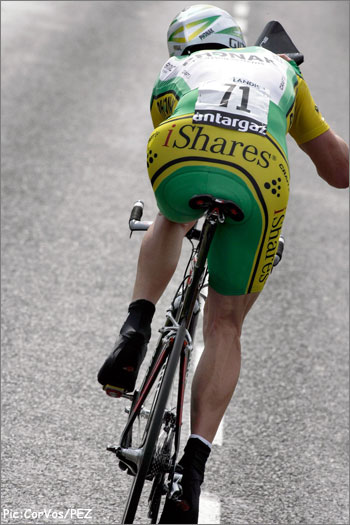 Floyd didn’t take the stage honors, but he didn’t need to – he did more than enough to take the lead, and his first Tour de France overall victory.

The Last Time Check
Kloden is faster than Landis, Landis is faster than Pereiro and everyone is faster than Sastre, five kilometers to the finish and it looks to be all over, its just the lower places now to fight over, could Pereiro lose second place to Kloden, we will have to wait and see. 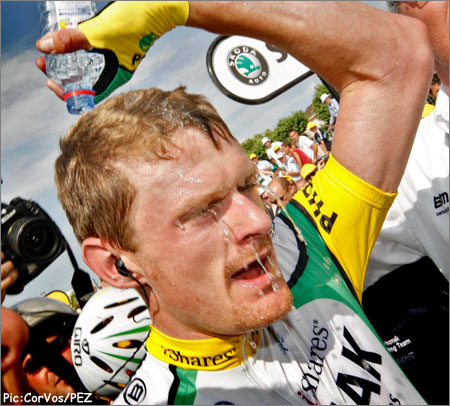 He did it. Floyd Landis managed to wrest the lead comfortably from Oscar Pereiro, and all he wanted on the line was a little space, peace, and quiet.

Its All Over!
Landis crosses the line, his face is of a man possessed, a big crowd gathers round him, he doesn’t like it, throws something, the police are having trouble controlling things, but it’s all over, he kisses the wife, gets congratulations from Rasmussen, he’s in yellow by 59 seconds, Pereiro holds on to second and Kloden is third. Sastre hasn’t had a good day and drops to fourth, Evans, Menchov and Dessel hold on to the other positions. 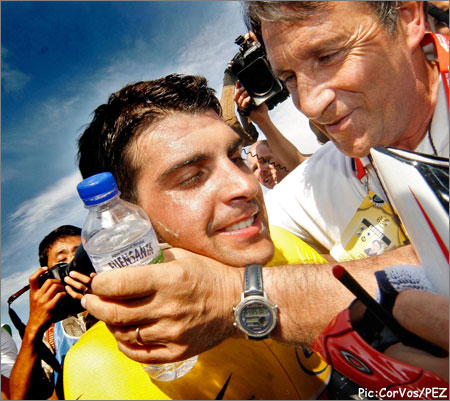 Oscar Pereiro didn’t look too disappointed at the finish. He came out of the Tour with an unbelievable 2nd Place – he won’t be underestimated ever again.

What a Tour! Everyone should be happy with the result, I guess the French will have their heads in their hands as they got rid of Lance after seven years of domination just to get another American to show them how to play there own game, but two Frenchmen in the top ten they shouldn’t be too unhappy – with the resurgence of Christophe Moreau and a new star in Cyril Dessel. 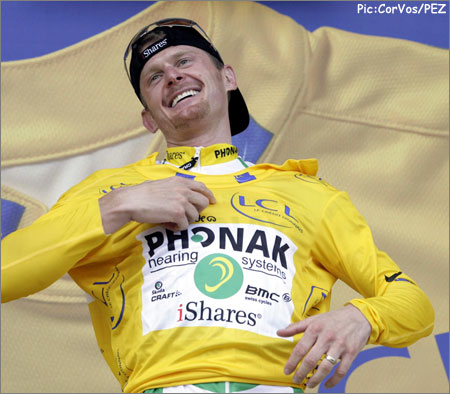 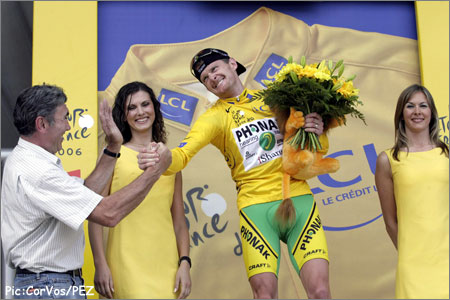 It was all smiles and happiness on the podium for Floyd Landis.