A barnstorming finish to a monster Tour de France stage left Tommeke Boonen frustrated once more. But if you’re going to get nipped at the line, losing to a three-time World champion isn’t exactly a humiliation. After losing out to Casper and McEwen, today he ran into a flying Spaniard on a Dutch team.

Charging into Caen, Oscar Freire put the hammer down as he shot out of the wheels and flew into the lead in the final metres. He got the bike length ahead, and there was nothing the other sprinters could do to overhaul him.

Freire is one of the classiest riders in the peloton and he seems to pull off enough great finishes to save his injury-wrecked seasons. He did it again today, with a huge jump around the field. 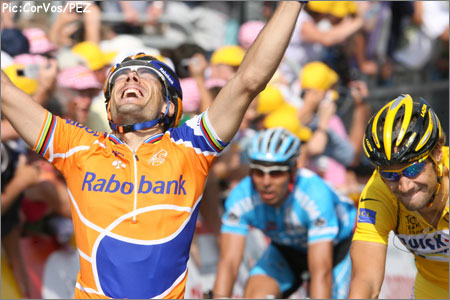 Freire was untouchable in Stage 5.

Robbie McEwen seemed to know that Freire’s was the right wheel but he just didn’t have enough on the day to squeeze round the Spaniard – he looked extremely tentative for once when he was left in the open to sprint around 200 to go. The headwind seemed to get the better of Robbie Mac and he ducked back in to wait a little longer to start his sprint, but by then it was too late. McEwen apparently said he could hardly see on the finish line yesterday after his efforts – today might have come too quickly to recover.

Tom Boonen still seems short of his prime sprinting form and he was left on the front today. The engine just doesn’t seem to be firing properly for Boonen, but another day in yellow is a decent reward (then again, 2nd in Tour de France bunch sprints isn’t all that terrible). 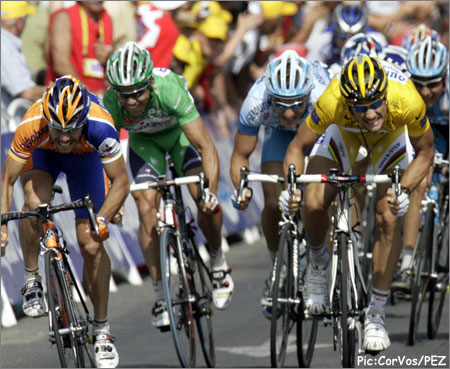 Freire exploded up the right side in the headwind sprint, duping everyone with plenty to spare for the win.

Our have-a-go heroes today will deserve an extra long session on the massage table tonight. Please take a bow, Samuel Dumoulin (Ag2r) and Bjorn Schrцder (Milram). A flurry of early attacks marked the skirmishes for the Polka Dot jersey, with Jerome Pineau, David de la Fuentes and Fabian Wegmann clawing for points on hills no bigger than the proverbial pimple.

A move went after about 30kms – eight riders – with Dumoulin and Schrцder in the middle, and when that pair jumped away just after the first hour of racing, they left the others behind. The gap stretched like a bungee chord, out to almost 13 minutes, but bungee chords always spring back. And the peloton was keeping a firm hand on the other end.

After a momentous day out – ploughing on for the best part of 200kms – Dumoulin and Schrцder were absorbed again. And only 3 kilometres from home! 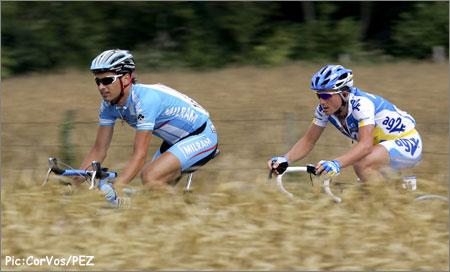 Dumoulin and Schroeder rode a long, lonely day out front. Then again, not too lonely, as there were spectators lining most of the route.

Almost the second the breakaway duo were caught there was a tumble on the right side of the bunch – Johan Van Summeren, Frank Schleck and (second day in a row) Julian Dean. Despite the hold-up, PEZ favourite Magnus Backstedt hit the front to drive the speed up – great to see Maggy mashing things on the front after his injuries.

Despite his boy losing out again, Quick.Step chief Patrick Lefevere is keeping an eye on the bigger picture though – he told Eurosport that Boonen is still strong and his team is good, but that they just keep having someone taking the win from them on the line. They’re still in yellow, though, so Quick.Step ain’t panicking!

A very happy Freire said just after crossing the line: “Every sprint is difficult here, there’s always danger involved. I had a good position and started from far back, but did quite well,” he told Eurosport. 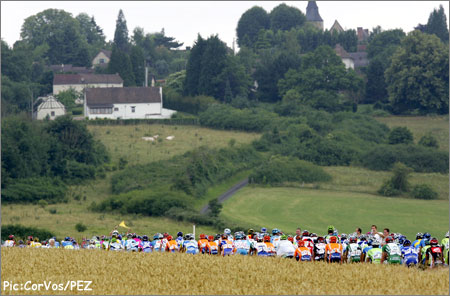 The countryside of Normandy is primo bike racing territory – Oscar Freire likes it, that’s for sure.

“I want to win another (stage) at least and then aim for the Worlds …. it’s good to go for the green jersey when you have a team for it, but we have to work for Menchov and Rasmussen (for the overall and mountains).”

Tommy B also got collared by Eurosport after the finish: “I lost because I was too eager and too nervous. Pippo was controlling the pace, Steven (De Jongh) was in the wheels. I shouted at him to go but he couldn’t hear me. So I waited for Steven to pull me to the front …. I’m still satisfied, still in yellow, and I’m sure the legs are good.

Circumstances (are different). Two years ago, I was getting my ass kicked for a week then I won two stages! Sometimes you win, sometimes you don’t.”

Philosophical stuff from Boonen, but there ain’t too much thinking for you guys to do – just keep it PEZ for all the best Tour de France coverage!

PEZ MailBag: The Sack Spilleth Over!