In the 1940s and 1950s, days like this were common. They sure as Hell don’t happen often nowadays, which makes Floyd Landis’s incredible ride today all the more amazing. I can’t remember seeing anything like this…It doesn’t seem possible, but today turned out to be even better than yesterday! Long live the Tour de L’Anarchie!

24 hours ago, a meltdown of gigantic proportions buried Floyd Landis and his Tour de France. Today, the MAN somehow clawed his way out of the cycling grave. The Floyd simply took off, in a way that his old boss Lance Armstrong never did.

Rather than hanging fire until the last climb and hoping to claw 2 or 3 minutes on the final slog up the Joux Plane, Landis took on the mantle of the old greats like Coppi. He exploded away on the first climb of the day, launching a day-long one-man epic.

A big group had got clear earlier featuring the likes of Padrnos (Discovery), O’Grady (CSC) and Sinkewitz (T-Mobile). Behind them, the Phonaks had been setting a strong pace to keep them more or less in check. 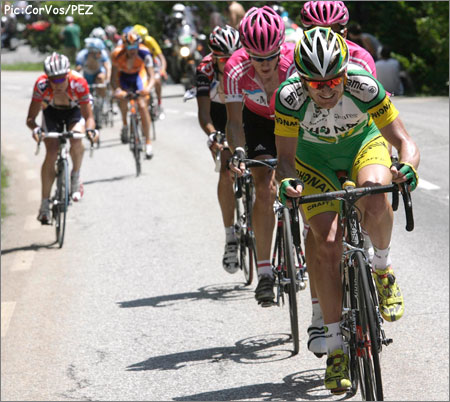 Landis was not secretive in his intentions. He sent his team to the front to drill it, then he took over the reins and destroyed all comers and rode off into the sunset.

On the Col des Saisies, Landis zoomed out of the already meagre peloton, and the rescue mission was on. The leaders of the Tour were all on his wheel when he attacked, but he rode each and every one off of his wheel, put his head down and galloped across a SIX-minute gap to the leaders! He roared up on the leaders, hammering it in the big ring. Clutching bidons in his fist – drinking one, then dousing himself with the other – he was raging. He pulled back 3 minutes on the leaders in just 6 kilometres before the summit!

Like yesterday, the sweat was pouring off, but this time it was due to exertion, not suffering. Over the Col des Saisies, he’d opened 3 minutes on the yellow jersey group and he was hurtling down the descent.

Patrice Halgand (Credit Agricole) had left the lead group and was clear alone, but that wasn’t going to last. Landis caught all but the Frenchman at the base of the Col des Aravis, and soared onwards. 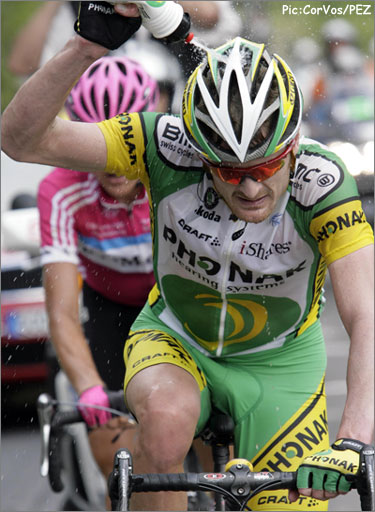 Floyd Landis went through more water than a California farm today. Let that be a reminder to all bike gamers: drink thy water!

Pereiro was more or less sans team-mates, and T-Mobile were working but to no great purpose. Eventually, the Floyd got up to Halgand with Patrick Sinkewitz (T-Mobile) and Lampre’s Righi struggling in his slipstream.

Onto the Col de la Colombiere, and the Phonak chief was riding into the sunset. Sinkewitz was on the limit just staying in touch. Halgand and Righi long gone and the gap still growing to the maillot jaune group. 7 mins 40 seconds to the main group at this point – Evans, Menchov, Kloden and Pereiro now seriously beginning to crap themselves.

Descending with no concern for personal safety, Landis was pushing every limit – the gap out over 8 minutes – and no one could comprehend that he was ‘maillot jaune virtuel’ by now!

At the bottom…it’s 9 minutes!! Sinkewitz is haemorrhaging brain cells trying to hang on. Floyd is hammering, the hysterical commentators are scrambling for the history books. When did anyone last pull off a stunt like this in the Tour?

CSC hit the front and start to work for the Cфte de Chвtillon-sur-Cluses climb, and the gap finally starts to shrink, but the carnage in the field is immense, as the combined forces of Voigt, Zabriskie, Vandevelde, and Gonchar are ripping a mean tempo reminiscent of the run-in to a bunch sprint.

The front duo hit the Joux Plane and Sinkewitz immediately hits the wall – BANG! All in capital letters! Landis doesn’t seem to notice, as he kills it up the climb. T-Mobile get their act together with Gonchar, Kessler and Rogers helping Kloden in the chase. 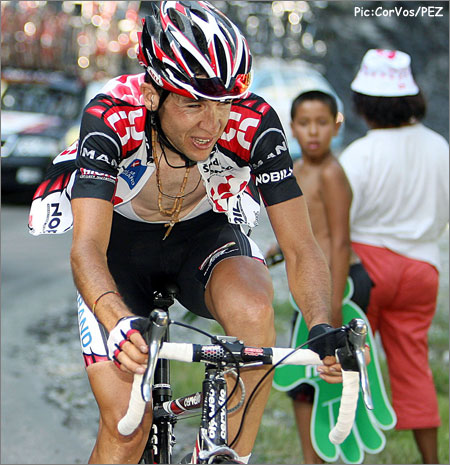 Andreas Kloeden talked about attacking today, but only Carlos Sastre had the legs to cash in on the checks his mouth wrote.

Landis is screaming on. Behind, Schleck pulls Sastre clear. Now, Pereiro has two men to worry about, as the Spaniard launches his pursuit of the yellow jersey.

Sastre is closing on Landis, down to about 5’ 55”, but he’s not closing fast. Over the top Floyd has around 5:10 to Sastre with only the descent remaining. Floyd flies over the top and plunges down into Morzine. A couple of tricky corners later and he’s on the finishing straight. At the finish, Landis managed to put even more time into Sastre and now the cycling world gets out their calculators. 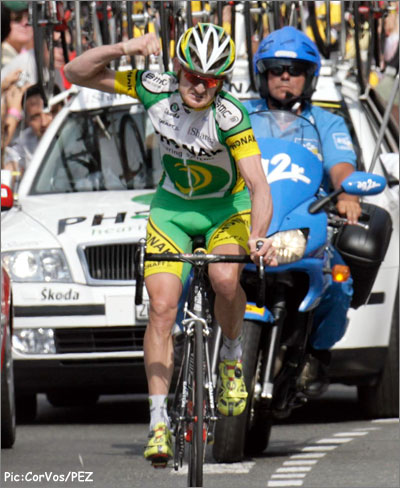 That was quite the emphatic victory salute.

A vicious, pumped fist salute for a first Tour stage win, and all eyes to the clock. Just how much damage has Landis done?

Sastre comes in for second, 5’42” down – another fine ride from the CSC man. Pereiro comes in over 7 minutes back with Boogerd and Kloden. Overall, he now has just 12 seconds on Sastre, and incredibly, just 31” on Landis! 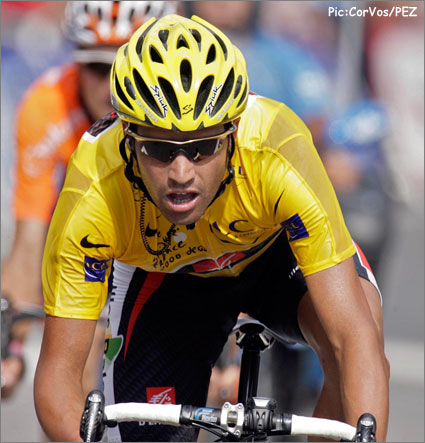 Oscar Pereiro lost time today, but managed to hold onto Yellow by a mere 12 seconds over Sastre. Unfortunately, now he has Landis looming only 30 seconds behind him as well.

The most astonishing two days racing in recent Tour history – and it all goes to the wire on Saturday and the final TT. Today’s stage did actually make things a bit clearer, and you can say with some measure of certainty (though that seems dangerous to say in THIS Tour), that the winner of the 2006 Tour de France will be either Oscar Pereiro, Carlos Sastre, or Floyd Landis. The three managed to, in their own ways, all distance themselves from the rest going into the final 57k TT.

Advantage? It seems too incredible to be true after yesterday, but Floyd Landis is once again the man in the driver’s seat.

Keep it PEZ for all the twists and turns.

Floyd Landis: (Laughing) If you saw yesterday…I don’t care [about the stage win]. I came here to win the Tour, and that’s what I still want to do. I’m not done fighting yet.

They (his chances) don’t look so bad. I’m confident in my time-trialling; if you saw today, you’d probably be, too.

I told everyone last night, if someone wants to win this race, they’re going to have to earn it.

Sean Kelly: I’ve never seen anything like it, and … he did it all on his own.

Mick Rogers: Congratulations, wow, that was a super ride. [Rogers sounded absolutely b*gg*red at this point]