Obernai to Esch sur Alzette, 228.5 kilometers with a few little bumps to get over, could and should be a day for the sprinters, but you never know. Lets hope no one gets the Green hand like yesterday; we’ve had enough news about blood in this Tour!

The race rolled out of Obernai without Dani Di Luca who is suffering from a fever, good news is that Thor Hushovd (CA) has started today after his brush with something on the finish straight causing his cut right arm. 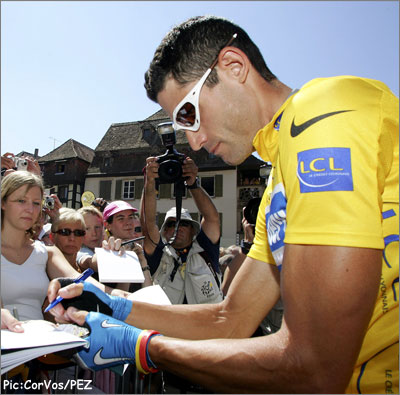 George Hincapie enjoyed one stage in Yellow before handing it right back over to Hushovd.

Two Spanish riders, Aitor Hernandez (Euskaltel) and David De La Fuente (Saunier Duval), went away very early after only 6 kilometers, bit mad, but you have to try! After 40 kilometers the duo had over 11 minutes in hand and were taking all the mountain and sprint points. Behind them, the peloton were not too bothered but the gap was getting steadily smaller as they work there way to the finish. By 50 kilometers to go its only 3 minutes advantage and I think we know what is going to happen.

Hushovd takes third place in one of the sprints of the day in front of Tom Boonen (Quick-Step), who had a good lead-out but BIG Thor came round him, after the sprint the teams start to go back to the cars for water as it is hot, so the gap goes up a bit, but it wont be for long! 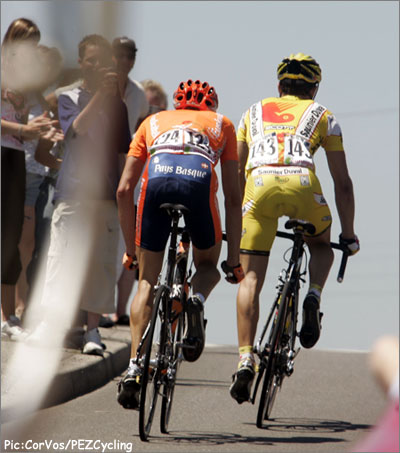 De Le Fuente and Hernandez did it hardman-style today. De La Fuente got some profit from the escapade, as he nabbed the Polka Dots.

The last little climb (Cat. 4 Cфte de Kйdange-sur-Canner) and De La Fuente takes it and carries on to drop Hernandez as behind Lampre started to chase on the lead in. De La Fuente has put his head down and wants to get any points that are left on offer for mountains and hot-spots sprints, Hernandez is caught as Thor and Tom battle it out for the sprint, Boonen gets it in front of Hushovd and with O’Grady (CSC) there too, this should put Thor in yellow at the end of the day.

The bunch are looking keen with riders from nearly every team on the front as De La Fuente covers 200 kilometers away, he takes more mountain jerseys points and should get the jersey tonight after the last climb in a few kilo’s. At the back there are a few dropped riders including yesterday’s winner Casper (Cofidis) and a crash. Current mountains jersey leader, Fabian Wegmann (Gerolsteiner) goes past a dieing De La Fuente, takes the mountain points and makes a solo attempt at the stage win with 10 to go. 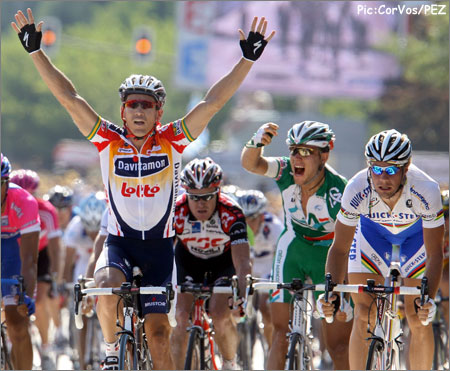 Robbie Mac triumphs, but probably made a quick exit as Big Thor looked less than pleased. Robbie is tough, but mano a mano with Thor?

Lampre on the front again as Wegmann is caught and the speed goes up, Kessler of T-Mobile gets a big gap (13 secs.) in the last 4 kilometers, Milram starts a light blue train for the old man Zabel, a big crash blocks the road for half the bunch and gives Kessler a chance, Lampre’s Ballan is on the front towing Hushovd, O’Grady, Boonen, Zabel and McEwen. Hushovd pulls his left foot out of his pedal as Boonen tries hard too late and McEwen goes through them all to take the second longest stage of this year’s Tour. Hushovd back in Yellow, De La Fuente in Mountains and McEwen in Green.

Tomorrow stage goes to Valkenburg and to quote Saunier Duval DS, Joxean Matxin, “this is the Amstel Gold race, look out for the Rabobanks and Boogerd.”