Just hours ahead of the soccer World Cup Final, Ag2r’s Sylvain Calzati has already put a big smile on the face of the French sporting nation. A superbly-timed escape and brave finishing effort nailed a second stage win in a week for the hosts. Now what was that about cycling at two speeds?

Calzati made his move with a little over 30kms to go, sticking it to his five breakaway companions, then putting time into them AND the bunch as he sped into Lorient for easily the most impressive road win of this Tour.

A couple of years ago, I watched Calzati crawling up the Ventoux in a Dauphine Libere TT, and I felt like I knew exactly what he was going through – suffering like a dog and coming in dead last. 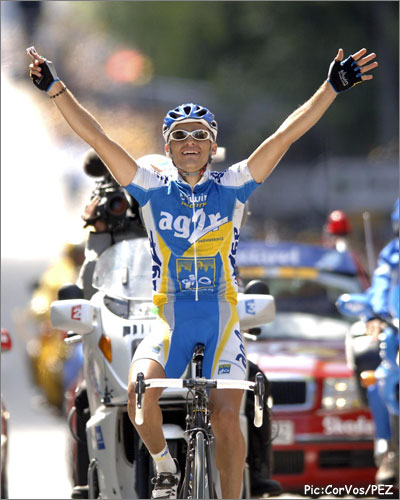 But to score success as a French rider in these tough times you need perseverance, guts and a belief that one of these days your chance will come. Calzati kept the faith and rewarded Ag2r with their justification for being at the Tour without a leader.

Early on there were the customary escape appearances by Samuel Dumoulin (Ag2r), Unai Extebarria (Euskaltel) and Cedric Coutouly (Agritubel), but nothing stuck over a ferociously fast first hour of racing. 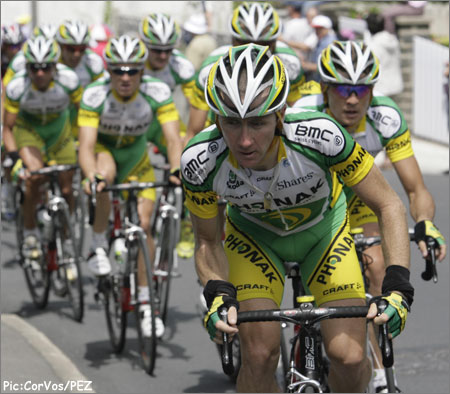 Floyd Landis’ Phonak team had to do a good bit of chasing today, as T-Mobile managed to put a rider in the break, putting the burden firmly on Phonak’s shoulders. This type of tactic could prove critical in the mountains to come.

T-Mobile gave themselves an easier day of looking after the maillot jaune by sending Matze Kessler up the road after about 50kms, with Calzati, Dave Zabriskie (CSC), Mario Aerts (Davitamon) and Liquigas rider Kjell Carlstrom.

They were gaining ground but decided to wait up for Patrice Halgand of Credit Agricole. The peloton was happy to give them their head, and off they went. It was Phonak keeping the speed high in the peloton, with only QuickStep and Lampre looking to pull things back for a bunch sprint. 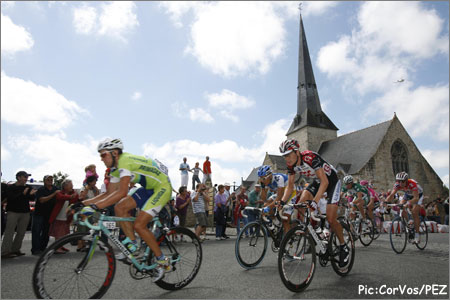 People always ask – why do riders attack in hopeless breakaways? Because they end up working…eventually. This stage looked a lot like a third-week Tour-day when successful breaks become the norm.

The gap went out over 7 minutes, and it was clear that the breakaways had a big shot at the stage win. Zabriskie was picking up bonus seconds along the way (enough to put him into the top 10), and Kessler was taking it very easy in the wheels.

Just when no-one seemed to be paying attention, Calzati powered away, with only Halgand able to chase him. 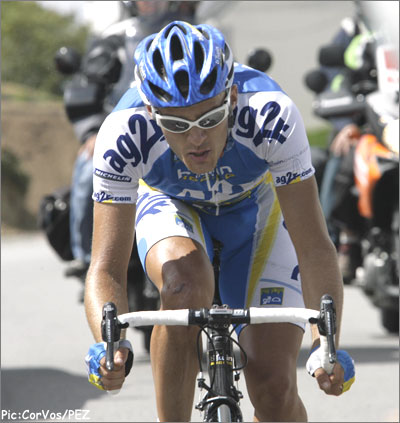 Sylvain Calzati had some serious gas left in the tank when he attacked towards the end, putting time into two chasers and a chasing field.

Carlstrom came across to help Halgand, but Calzati was looking great flying through tight corners on the narrow roads. He was helped by his guts, determination and a puncture for Tom Boonen, which took QuickStep off the front of the chase.

Calzati kept the hammer down, and was able to exchange a celebratory gesture with his DS, before taking his biggest ever win. 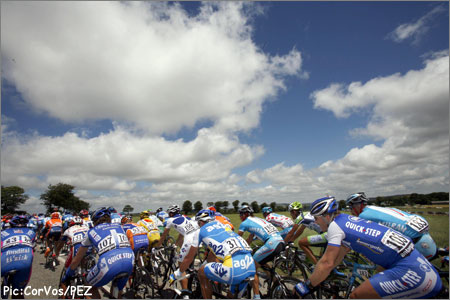 It was another lovely day in France, the day after the Tour was turned completely upside down.

So, France is happy, and they’ll be more or less insufferable for all the Italians on the Tour if Les Bleus give the Azzurri a pasting in the World Cup tonight!

PEZ will have lots more to keep you entertained during the rest day tomorrow, and we’re back with race action on Tuesday. Keep it PEZ!