In the last 24-hours, Strasbourg, the site of this year’s Grand Depart for Le Tour, has become the epicenter of what probably will be the most immense doping fall-out in cycling history, if not sport. PEZ-Man on the scene, Ed Hood catches us up on the explosive news.

Jan Out
The news started in earnest last night when it was announced that Red-hot Tour favourite, Jan Ullrich (Germany), his manager Rudy Pevenage, and teammate Oscar Sevilla (Spain) are all out of the race, T-Mobile have bitten the bullet hard and banished the three men, all having been named by Spanish police as involved in the Operacion Puerto affair.

Ullrich is said to be back in Germany already. It’s 11.00 am on a beautiful July morning in Stasbourg and instead of looking forward to the tomorrow’s prologue, we’re all wondering what happens next.

French squad, AG2R have stated that if their main-man Francisco Mancebo (Spain) is implicated, then it’s a plane home for him too. Sure enough, the news of Mancebo’s implication came soon after, so last year’s 4th Place overall, Mancebo is out. So far we have heard nothing from CSC or Rabobank whose Ivan Basso (Italy) and Denis Menchov (Russia) as last winners of the Giro and Vuelta respectively are also under a very grey cloud; it’s hard to see how they can stay on the race given T-Mobile’s actions.

A press conference on the situation has just been called, PEZ will up-date you immediately after this is concluded. 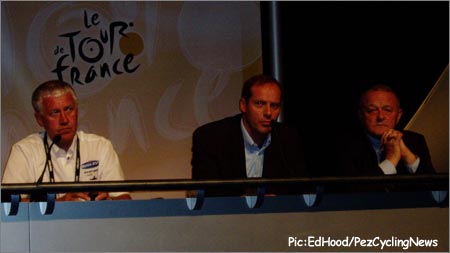 Patrick Lefevre of AIGCP, the rider’s organisation plus Christian Prudhomme and Jean Marie Leblanc of ASO lay down the law.

It’s Official
The 2006 Giro d’Italia winner, Ivan Basso (Italy & CSC} and podium-hope Francisco Mancebo (Spain and AG2R) have been excluded from this year’s Tour, five or six other riders will be sent home later today. They join T-Mobile duo of Jan Ulrich (Germany) and Oscar Sevilla (Spain) who were sent-home by their team management last night. All are alleged to be deeply involved in the organised drugs ring raided by Spanish police and code-named ‘Operacion Puerto’.

Denis Menchov’s name was interestingly enough not included in the names, so he appears to be safe to start on Saturday.

The announcement was made at a late-starting press conference. Five individuals faced the assembled media-throng in the Salle Schweitzer auditorium –Yves Bonnamour, Roger Legeay and Patrick Lefevre of AIGCP, the rider’s organisation plus Christian Prudhomme, and Jean Marie Leblanc of ASO, the Tour organisers.

A surprisingly tranquil-looking Prudhomme was first to speak, explaining that the organisation was pleased with what T-Mobile had done but had been waiting for the documents released by the Spanish police and Interior Ministry to be translated before taking their own action. Based on the content of these documents all 21 team managers had met and decided unanimously that all riders implicated should be excluded from the race.

Discovery Channel’s John Bruyneel released this statement on the managers’ meeting: “On the eve of the 2006 Tour de France all of the Team Director’s meet to decide on the current situation regarding the riders named in the Spanish doping scandal. The directors unanimously decided to uphold the code of ethics that was signed by all teams on January 1, 2005 which stated that no team would allow a rider to compete while under investigation in any doping affair. This is certainly an unfortunate situation for all of professional cycling, not just those teams and riders involved. And even though the top pre-Tour favorites have been suspended from competition, all of our Discovery Channel riders continue to maintain their focus on tomorrow’s prologue Time Trial. The entire team has prepared meticulously for this race as they have over the past seven years and we continue to have high expectations about our chances in this years Tour de France.” 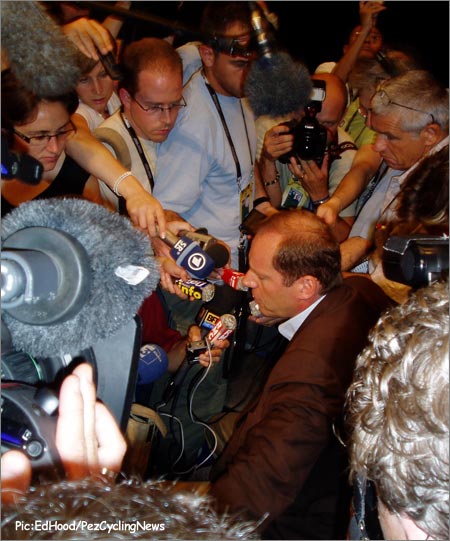 Rumour became fact as the names of Basso and Mancebo were scribbled into a hundred note books. There are other riders implicated but their names will not be released until after they have been told of their exclusion by their management; apparently those affected were out on their bikes at the time of the decision.

He continued that the Wurth/Astana team exclusion was a different situation in that there was evidence of systematic drug-use within the entire team. He asked us all to continue the fight against drugs and to try and enjoy the race tomorrow.

Next to speak was Lefevre – a normally gregarious man who we are more used to joking with the press after some Tom Boonen exploit – ‘I am not proud to be here,’ he started off by saying but confirmed that the decision was unanimous and also explained that the excluded riders would not be replaced, so T-Mobile go at least two riders down immediately.

With no questions invited from the floor, the five left their seats and a media-scrum ensued, one journalist taking to all fours to escape the crush.

I managed a few words with AIGCP secretary Bonnamour who he estimated there were five or six more casualties to come.

Bjarne Riis, top man at CSC will hold a press conference this afternoon which we will be attending.

Bjarne Meets The Press
Bjarne Riis of CSC is a man who walks straight and tall, exuding self confidence; at this afternoon’s press conference he was hunched and disillusioned, his dream of a Giro/Tour double for protйgй, Ivan Basso in ruins.

The CSC boss explained that Basso was excluded from the Tour and suspended by the team because he was ‘under suspicion’ in the ‘Operacion Puerto’ scandal, Basso was told by Riis this morning and is; ‘very sad.’ The decision was; ‘entirely mine,’ said Riis. 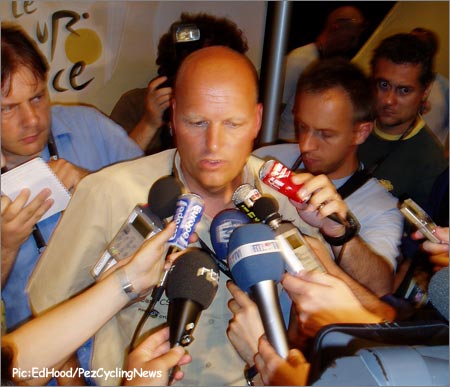 He fielded a large number of questions from the floor, including one asking if excluding Basso made him feel as bad as he did when he chucked his bike into a field during a time trial in the 1997 Tour (sometimes us journos aint the smartest). He also explained that he had ever any reason to doubt Basso up until now and there had been no indication of anything untoward going-on in his preparation, but continued that he couldn’t follow riders around to ensure that they did not get up to anything untoward.

He also reminded us that Basso is currently only under suspicion, but the Pro Tour ethical charter states that any rider in that position must be excluded. In addition he made the point that it would have been impossible for Basso to go about his cycling-business in a normal fashion; ‘he would be hunted by you (the media) day and night.’

The emotion was plain to see in Riis as he explained that he had worked for six years to get the team to where it is, ‘I don’t have to do this, but it’s what I love, it’s my life.’

If the Basso affair wasn’t bad enough, Riis was questioned about ex-CSC man, Tyler Hamilton and the grave revelations coming out of Operacion Puerto about him. ‘Of course it’s disillusioning, but it’s not up to me to judge,’ replied Riis. On the subject of the team’s future, Riis was emphatic; ‘I want to create something special here, something to be proud of. I will fight for my riders, I will fight for my team, they need me the sport needs me.’

Soon after this conference ended, AG2R met the press, but it was as if Mancebo’s exclusion was an anti-climax after the exit of Basso. The auditorium was smaller, the media numbers lower and only French was spoken, I tried to ask a question but was given one of those shrugs the French are so good at. I did the better than the Spanish guy though, he moved to take the mike and was gestured back to the side of the room.

Astana/Wurth: No START For YOU!