It’s that Badger again, clad in a yellow skinsuit to remind us that he won last year, it looks like the D-Day invasion fleet behind him, the cars and motorbikes raise a huge cloud of dust and waste paper as they roar past in a sonic boom of air horns and exhausts.

We’re in the Paris suburb of Boulogne-Billancourt on a hot Saturday afternoon in July 1986 and Le Tour has just blasted-off.

Despite the noise and the dust the stop watch isn’t fazed and ignores the hype to tell us that Le Blaireau is down. The man who has done the badger-baiting is also of small, compact, muscular build and he rides a Gitane low-profile time trial bike just like Hinault used to. 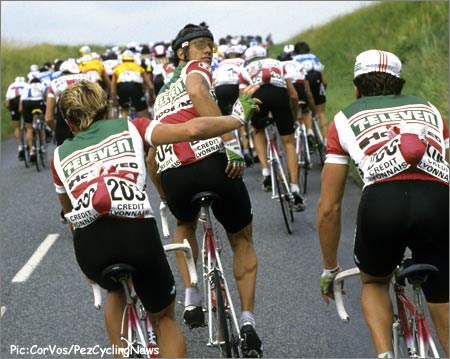 In spite of much time spent chasing the pack, 7-Eleven impressed more than a few Euros at the 1986 Tour.

Thierry Marie (France & Systeme U) was the rider with a Moto GP-style “bum Spoiler” behind his saddle but the guys from the UCI have ruled that it’s street-legal so he’s the man to pull-on the first maillot jaune after just 5 minutes 21.069 seconds of raw pain on the wide, flat boulevards. Hinault was nearly three seconds back and had the added ignominy of being beaten into third by Eric Vanderaerden (Belgium & Panasonic) who ran Marie to less than half a second.

First starter on the day was an interesting one, Canadian* pursuit champion Alex Stieda riding for the team without whom you could argue there would have been no Lance-mania, all the way from America – those 7-11 boys. Stieda did 5-33 without much fanfare to finish 21st some 12 seconds behind Marie, not a bad ride off number one – but it would get even better for the man with the rock-star hair cut.

(*Ed. Note: To this day Stieda is often thought of by confused fans as being American.)

Back in those days we just hired a mini-bus, chucked a tent in the back of it and headed for France, that night we camped on the Bois-de-Boulogne.

In 1986 it was still the days of split-stages, hated by riders and mechanics but great for the fans – and the Tour’s coffers. We decided to watch the start of Sunday’s stage one, an 85 kilometre road race from Nanterre to Sceaux, but miss the finish so we could select a prime spot to watch the afternoon stage – a 56 kilometre team time trial from Meudon to St. Quentin en-Yvelines.

In those days of no cell phones or internet it was hard to get accurate race info quickly; when some guy told us that one of the 7-11 riders had taken the yellow jersey we were sceptical to say the least. We chose a series of bends through a construction site near the finish as our spot and appropriated lumber from the site to build our very own temporary grandstand for the TTT.

Favourites were team test-masters Panasonic, Hinault’s La Vie Claire team and the Systeme U squad of Marie and his French double Tour-winner team mate Laurent Fignon. At their best these races are a wonderful spectacle with speed, precision and team-work at its absolute pinnacle. At their worst they can resemble Napoleon’s retreat from Moscow; whilst the big-guns snarled past with just millimetres between front and rear tyres, Lucho Herrera and his Cafй de Colombia outfit contrived to loose eight minutes with four of his team mates failing to make the time-cut – remember that it was still only the first afternoon of real racing. 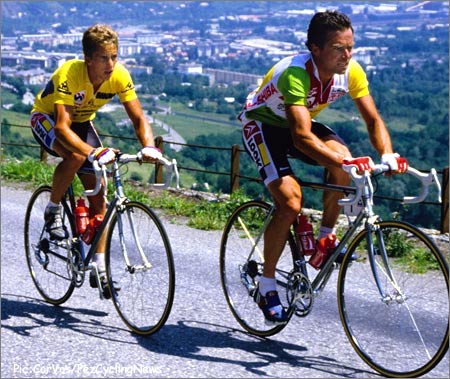 Greg LeMond made life miserable for the Badger (Bernard Hinault) on his way to an American breakthrough at the 1986 Tour.

We scanned team after team for the maillot jaune and when 7-11 eventually passed we could see no sign of yellow, albeit only half of the ten man team actually came through together. As we tried to figure-out the missing maillot, a gaggle of riders hobbled into view; sure enough they were 7-11 guys and there was number 210 – Alex Stieda clad in yellow. The maillot jaune usually glows like it is illuminated from within but today it didn’t have that quality as the Canadian limped past.

Unbeknownst to us he had slipped the bunch in the morning stage, picked-up time bounces then latched on to the winning break when it caught him, hanging-on to take fifth behind stage winner Pol Verschuere (Belgium & Fagor) and the jersey by eight seconds from a no-doubt annoyed Vanderaerden.

Whilst Stieda had pulled-off an amazing coup he had also wasted himself for the team time trial, always a brutally hard event; and neither was the 7-11 cause wasn’t helped by four punctures and a crash involving speed skating legend turned pro bike rider, Eric Heiden (USA).

The jersey now passed back to Marie, his System U squad having emerged triumphant, French cyclists always have to be given banal nick names, “Du-Du”, “Gilbus”, “Pin-Pin” – are those enough for you? But Marie’s was actually very appropriate, “The Viking”, with his handsome features, blond hair and piercing blue eyes it would have been easy to imagine him jumping from the prow of a long-ship, axe in hand.

My buddy Viktor knew a French guy who taught in a school in Barfleur on the Cherbourg peninsula in Normandy where Marie lived, every morning “The Viking” pedalled past the school at the same time to start his training run; in the afternoon, depending on his programme for the day he would re-appear in the opposite direction on the way home, but that was six or seven hours later. Marie was a real pro, and unlike some other Frenchmen who build a career on one promising result; he won three Tour prologues as well as the same disciplines in the Giro and Vuelta plus a host of other one day races and
stages.

With the jersey back safely in European hands we set-off home, chatting in the mini-bus we agreed that whilst LeMond’s stage win in the Tour in ‘85 and Stieda’s brief time in yellow were interesting distractions, those North Americans would never really make an impact on the Tour; just then we heard on the radio that 7-11 man Davis Phinney from Pittsburgh had won the stage.LeMond would go on to win this Tour, usurping Hinault and beginning 20 years of American Tour domination which has given us Euros plenty of opportunity to get used to those upstarts from across the Atlantic.