The final report from the Tour de PEZ is a few days late. Well, it just wouldn’t be France if the internet actually worked now would it, and anyway, these stories are like a good wine, they mature…. I hope!

Champs Elysees Celebrations
Paris is a beautiful city and the Tour de France a beautiful race so what better way to combine the two by watching the event from the balcony of one of the widely proclaimed ‘best hotels in the world’. The kind fellows at VeloSport Vacations allowed me to gate crash their Champs Elysees celebrations and get access to the ‘salon’ and balcony, rented for the day, exclusively for the tour group. 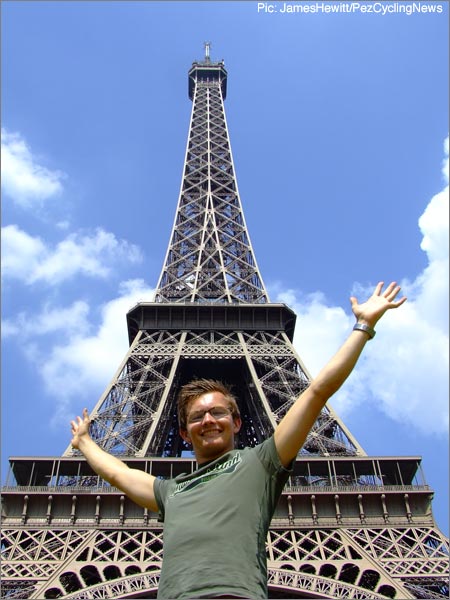 What’s a trip to Paris without a visit to the Eiffel Tower?

Walking Through The Arrivйe
On the morning of the final stage we wandered from our hotel, another Velosport arrangement, the splendid Hotel Castiglioni, to the Place Concorde next to the Champs which was just a stones throw away. In fact, I’m pretty sure I could have thrown a stone to the Obelisque with my left hand and a few cognacs inside me it was so near but I’m pretty sure the CIA would probably have something to say about it.

The American Embassy was just around the corner. With press pass secured safely around my neck we sauntered down the cobbles, under the finish banner and continued on to the Arc de Triomphe. It was one of those times in life that you consciously tell yourself to remember the experience. It is not very often that the opportunity materialises to walk up what is usually one of the busiest passages in France without a car in sight. After the novelty was superseded by the intense sun beating on our heads we hopped over the barriers into the shade of the trees which line the road. After wandering through the streets which were rapidly filling with fans six hours ahead of the caravan’s predicted arrival in the capital we made our way back to enjoy a brunch at the ‘Castig’ before going to watch the race ourselves. 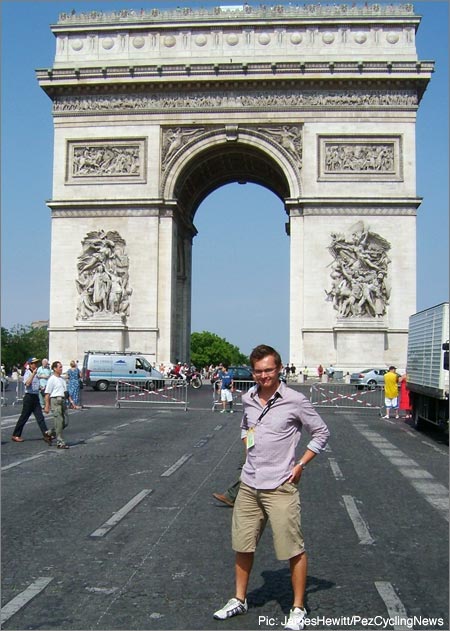 On a normal day, I would have been run over about 1000 times by now.

Harps And Sheikhs
Now, it just wouldn’t be appropriate for a PezCyclingNews journo to brave the media scrum down in the press area so I decided to go straight to the ‘balcon’ with the VeloSport crew and enjoy the air conditioned opulence of the room rented for the day. 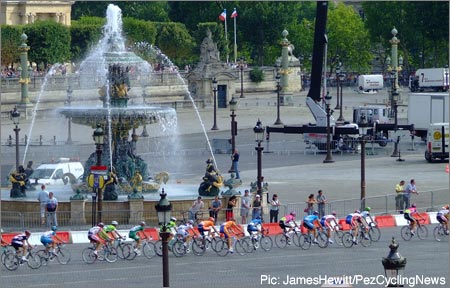 This was truly a luxury vantage point.

The salon was located in the Hotel Crillon, favoured by visiting dignitaries, celebrities and Lance Armstrong alike for his last 7 Tour de France wins. It’s quite a place. As I wandered into the lobby past the security guards at the entrance I became aware of some pleasant music played on a harp floating around the marble lined space. “Classy” I thought, “they must have an excellent concealed speaker system”. “Geek” someone coughed in the background.

I dawdled past reception only to notice that the harp music was actually being played by a very capable musician on a real harp with an audience of what looked to be a group of sheikhs. I continued my meander to the bathroom. In a place as expensive as this there had to be some valuable complimentary trinket going in the rest room. A monogrammed towel maybe? Well, there wasn’t but the gold taps were pretty impressive. I’m easily amused. 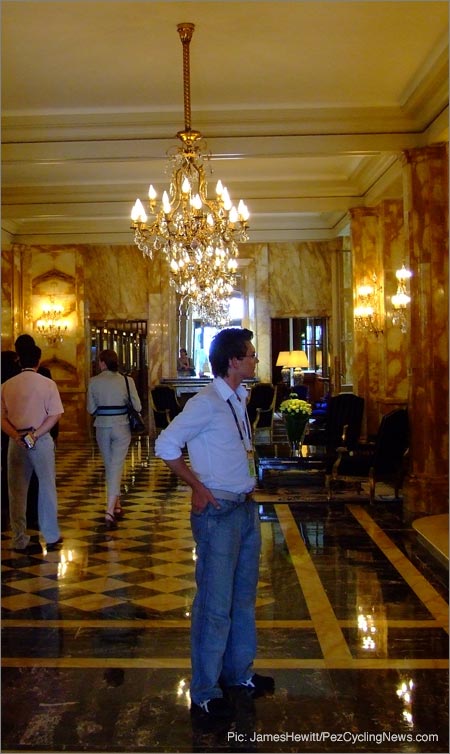 Not the place for you if you are allergic to marble.

Caravan Finale
After enjoying the ambience upstairs for a time I decided I needed to reacquaint myself with my working class roots so I walked back to the press area across the road to watch the caravan. The caravan’s tour around the laps of the city are really the grand finale to what for them, has been a gruelling three weeks of extreme public relations activity.

The long lines of gaudily adorned cars were joined by articulated lorries who, purportedly for the purposes of public amusement drove in s-bends down the Champs Elysees seemingly skimming the barriers. Whilst entertaining I was mildly perturbed by the site of a bright blue Haribo tractor trailer that probably weighed more than the hotel I had been in a moment before thundering towards me. Nevertheless, I took a photo for your benefit with no regard for my own personal safety. 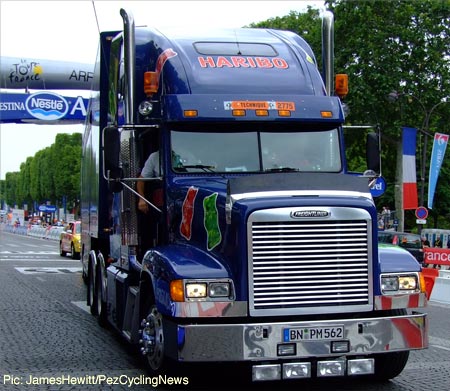 Its Champagne Darling
Following my short spell back in the ‘real world’ I resumed my spot on the balcony to await the race as it began its 8 laps of the city centre. The view from the hotel was fantastic backed by the famous fountain and Obelisque. As the race sped by we sipped champagne and toasted the rider’s achievement.

I felt further away from the pain and suffering that they had endured than I ever had before and for the first time in a long time was actually quite happy that I hadn’t made it to the Professional ranks. One of the advantages of riding for fun is certainly found in experiences such as these when its possible to enjoy cycling and challenge your limits but still switch off from the performance based world and simply appreciate the spectacle of it all with a glass of the good stuff. 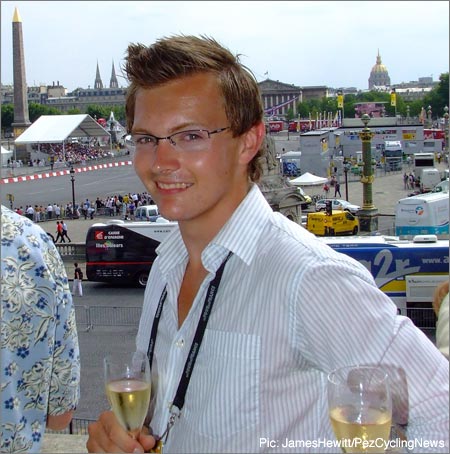 I’m not drunk in this photo…. yet.

А bientфt
After the race was won I made my way to the haemorrhage of team trucks to try and speak to some of the racers. Snatching a word from the exhausted competitors was unlikely but a picture tells a thousand words, maybe non more so than Thor Hushovd, delighted with his final stage victory and of course Floyd, though once again obscured in my photo had a smile from ear to ear. Fortunately my friend from the VeloSport trip Massimiliano Accaputo managed to snap the man with his national flag in tow! 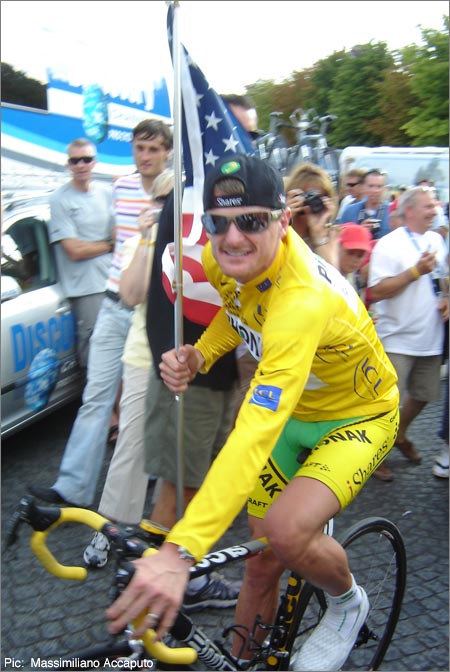 Nice shot of the Floyd post Tour win. Thanks Max!

The Tour is about people, the riders, the fans, the emotion and as I was about to walk away for the last time a group arrived that may have summed it all up. A group of Norwegian Thor followers put on an impromptu display of song and dance for the stage winner. 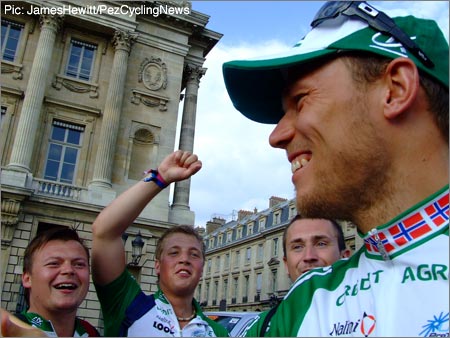 Thor was certainly a happy camper, as were his Nordic groupies. P.s. he won on a Look 595 just like I was testing. Cool eh!

Whilst this race may have been one of the most controversial, the organisers continue to wallow in the maze of bureaucracy that capillarise sport, at the end of the day, people still love it, riders still race it. I’ll certainly be watching next year. On that note, for the final time this TdF,