Pez-man James Hewitt is deep in the Pyrenees – chasing le Tour like thousands of fans. But he’s the only fan riding the new 2007 Look 595, which came in handy as he hauled his carcass over the mighty Tourmalet, and survived a chase by the menacing ‘caravan’ to enjoy a typically French race-side lunch…

Good-bye Pau, Hello Tourmalet!
Good-bye Pau, hello Tourmalet. Yesterday I expressed my interest in riding the col d’Aspin before the big boys gave it a go but I couldn’t quite resist the temptation of the Tourmalet. After unloading the new Look 595 from the car I was quite excited about the prospect of riding the new machine, but mildly perturbed by the gradients which awaited me; no less than an average of 7.7% over 18.3km!

Climbing on the Look 595 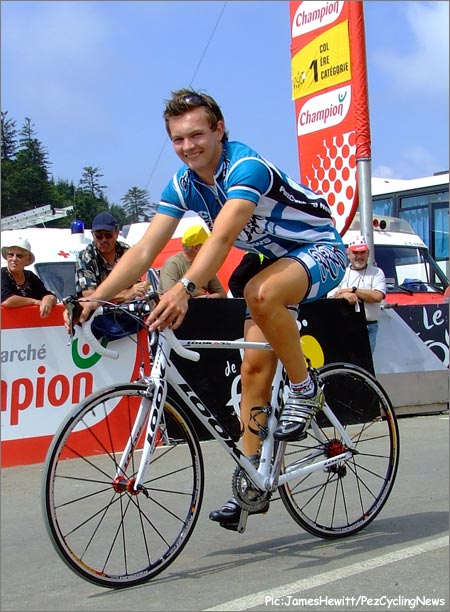 As the look on James face suggests, he has a number of things to smile about: 1. he’s made it to the top of the Aspin without being run over by the caravan – 2. After the Tourmalet, the feeling has returned to his legs and lungs – and 3 – he’s riding the new 2007 Look 595 across the mountains of le Tour. A nice trifecta. [Ed Note: keep reading for the ‘real’ story…]

It’s not often that a bike provokes an instant emotional reaction (except for when a misplaced cleat entry might leave you with a saddle rather too far up between your legs) but I was enthused when I stamped on the pedals to begin my ascent and, despite the fact that my 39×23 climbing gear choice was overly ambitious there was refreshingly little flexibility apparent in the bottom bracket. In fact, I’d go as far to say that I didn’t feel any. 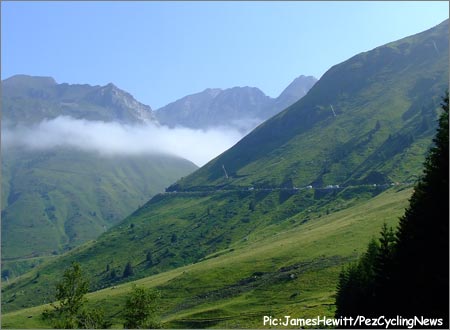 The day started with an ascent of the 18km Tourmalet – summiting above the clouds.

Bike frame reviews are awash with clichй but this is one occasion where I can honestly say that ‘every ounce of effort went into forward propulsion’. I had the impression that the energy transfer from my legs to the rear wheel was very efficient, something I would be very grateful for when I hit the 9% grades in the closing kilometres of the climb. So as I found the rhythm that once propelled me up these slopes significantly faster [As an elite level amateur racer, James was eleven kilograms lighter last time he was in the Pyrenees] I churned my way to the summit. 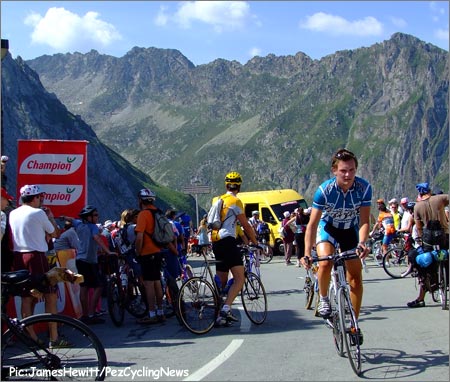 I was happily ensconced in my private world of bicycle mediated self ‘flog-ulation’ when I passed a rider who spontaneously shouted “that’s a beautiful bike” with a unmistakable Aussie twang. It’s not very often someone says that, especially when said vocal outburst is at the expense of precious oxygen. However, I think he was right, in fact, I think I had the best looking bike on the Tourmalet today. You can disagree if you like, I just won’t listen to you! 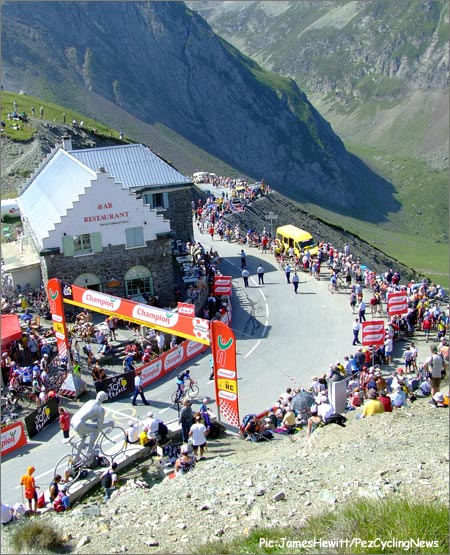 High atop the Pyrenees – they serve a great ‘plat du jour’ in the cafe.

Breakaway Fantasies
The bike’s responded quickly to changes of speed and felt agile yet controlled when I picked up the pace, rocking the bike from side to side as I accelerated through the bends of the climb. It was a very pleasing climbing rig. Another notable feature was the carbon handlebars. Their anatomical shape was particularly comfortable when holding on to them either side of the stem whilst convincing myself I was leading the peloton on a solo breakaway. This fantasy was reinforced by the fact that the bike itself was in the characteristic all white colour scheme that marks it out as the ‘ProTeam’ edition.

I liked the anatomical bends to the carbon bars.

So as my new found friend David Faenkle of Brisbane and I shared a few moments of company in what can often be a solitary pursuit, it got me thinking of how sociable the world of bike racing can be. This sentiment is especially true amongst the fans and spectators at the Tour de France. Following the descent of the Tourmalet I was obliged to jump in the car and hitch a lift up the Col d’Aspin. You see, whilst my press pass allowed me to stay on the road much longer than is possible for the general public, the publicity caravan was significantly ahead of schedule and I was at risk of being steam rolled by a comedy sized coffee bean and other such spectacles which precede the race. 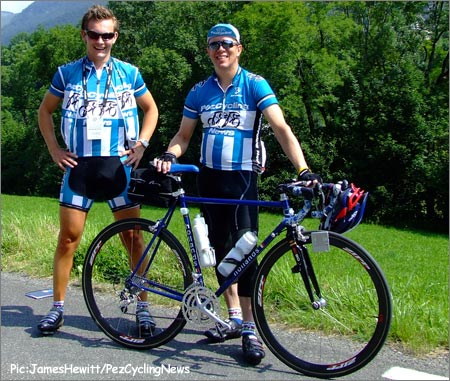 Check it: Pez Fan Arthur Carter – immortalized on the web – simply because he wore his Pez jersey!

On our motor assisted climb up the Aspin I spied a distinctively fashionable rider. How could I miss that PezCycling jersey? I recommend you buy one because for his efforts Arthur Carter of Baltimore Maryland has got his name and photo in this article. Even better, he got his photo with me! Now how’s that for value for money. 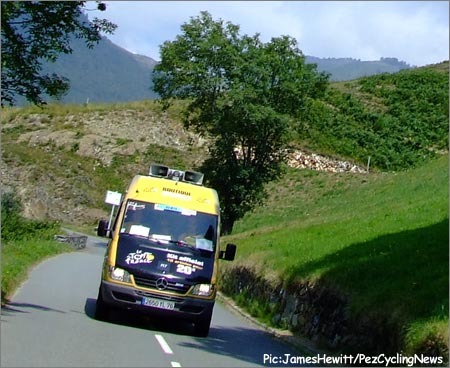 The publicity caravan hot on our tail.

Boos and Hisses From French Fans
On reaching the summit I took advantage of a gap in the following cavalcade of cars and vans to pull the bike out of the car and snap a photo at the summit to pretend I had ridden it. Unfortunately this did not go down too well with the fans at the roadside who didn’t appreciate my time pressed predicament. I was greeted with boos and hisses by the French fans. Note that in the photo it is not a smile on my face, it is a grimace in response to the abuse I was receiving from the partisan crowd. No sooner had the echoes of derision ceased and we had descended the col but the caravan was hot on our tail and we had the pedal to the metal to stay ahead. 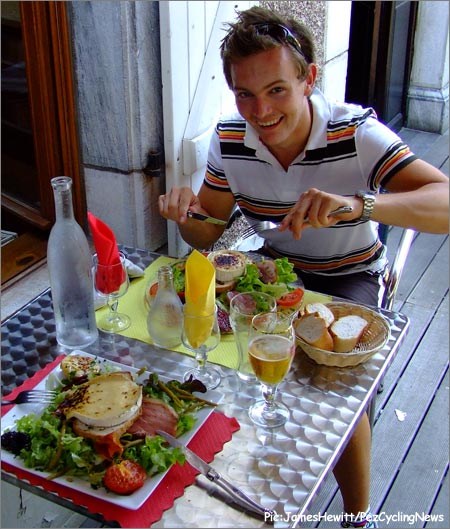 Once down the back of the Aspin we could begin the next leg of our journey at a more sedate pace. However, before we could be on our way proper there was some important business to attend to; food of course!

That’s A Load Of Bull!

Now my culinary experience warrants a paragraph all of its own. We found a pleasant bistro at the base of the climb where I partook of what is widely believed to be the best recovery product on the market today. A hot goat’s cheese salad and an orangina representing the ideal combination of protein, simple and complex carbohydrates. 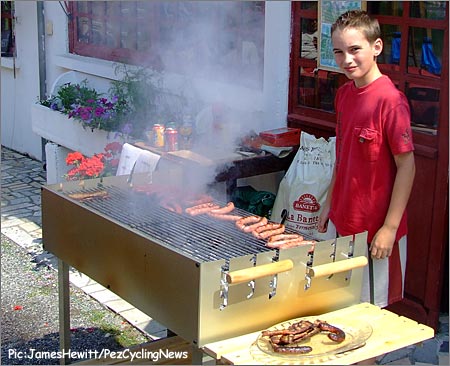 I also took the time to speak to some of the locals. Nearby was a family enjoying a barbecue and taking advantage of the increased number of people in the area to sell their home made honey. 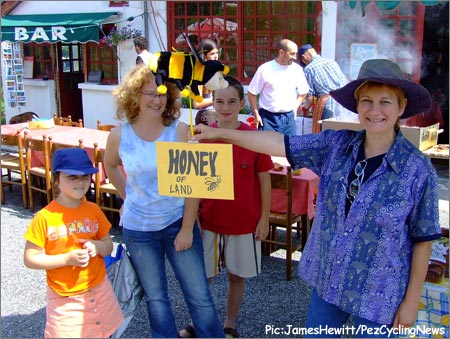 I also chatted to some real French fans inside our eatery who were more than happy to reveal their allegiance. They predicted a French winner of course and even conducted a small wager amongst themselves. I caught the fiscal exchange on camera for the purposes of evidence. I’m sure the Tour organisers would like to hear about this illegal gambling operation. 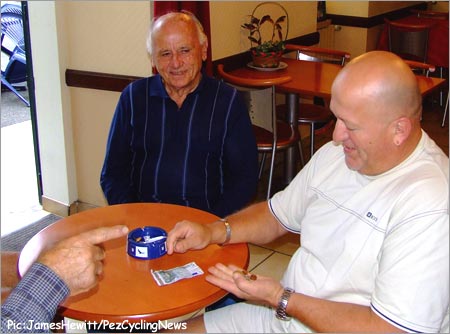 Nothing like a friendly wager on the day’s stage to liven up the action.

After recharging my batteries with a post-lunch espresso we made our way to the car to begin the drive back to our hotel but not before one last photo opportunity. I spotted a bull tied up in a car park near to our ‘voiture’. Unfortunately he was less forthcoming with his prediction for the stage! So until tomorrow where I will be reporting live from the finish in Carcassonne… 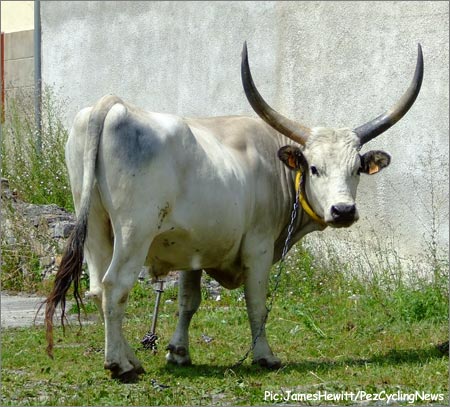 The closest thing to a Texas long-horn at this year’s Tour.