Tour De Pez: Breaking Up Is Hard To Do

It’s like when you go home after a six day race or you end a relationship, you think you’ll feel better when it’s over, but it doesn’t, it just feels hollow and sad. I broke-off my affair with Le Tour in a car park at Saint-Meen-le-Grand on Sunday, at 12.50 pm local time.

I had made sure that my travelling companion for the last week, James from Cycling.tv was organised with his lift from SRM to get to Bordeaux to catch his fight home. Then it was just me in my car, God knows how far from home – eight or nine hundred miles? 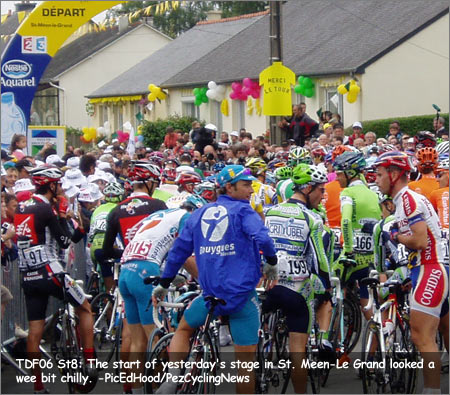 I slid gently out of sleep, instead of being jarred awake by the alarm.
The start wasn’t too far away, about an hour and signing-on wasn’t until after 11.00, so we were a bit less stressed this morning. 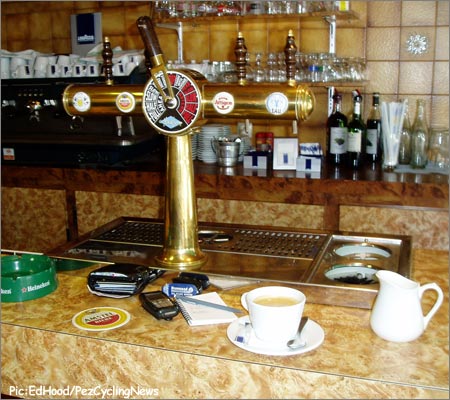 Sure there’s a huge bike race nearby, but we mustn’t forget our daily sustinance…

It was cool in le Village today, temperature-wise – it’s always cool atmosphere-wise (and the scrambled eggs were great). Brittany is velo-heartland, maybe not to the extent that it is in Flanders, but it’s in the soil here too.
It was a typical Breton morning, a cool breeze off the Atlantic, overcast with a fine drizzle falling now and then but maybe the promise of a bright afternoon.

Le Tour arriving in a place like this is a big deal.

For the old guys who organise amateur races year in and year out, their pass in to Le Village makes it all worth while; a few words with Jean-Marie Leblanc, maybe a reminiscence with Bernard Hinault – it makes for good chat over your Ricard for months to come.

We needed some Magnus shots and I thought it would be good to get some riders views on the ‘show so far’ so I set-off on the hunt, camera and notebook at the ready. 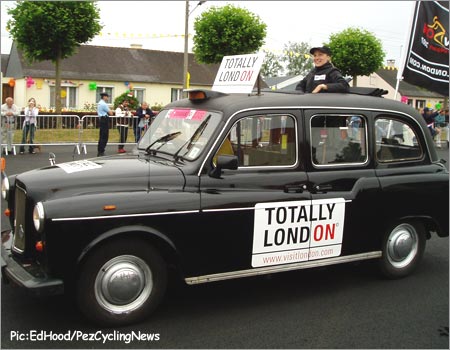 The Tour always looks ahead – like to next year’s start in London.

On the way out of the village I spotted an under-rated hero of French cycling – Eric Caritoux, twice French champion and winner of a brutal Vuelta in 1984.

Before the team buses arrived, it was time for the caravan – a pizza chain has three vehicles on the convoy, don’t ask me how they do it, but they give off a convincing smell of pizza as they go.

Magnus is a good guy to talk to, I popped some pics of him first, including a couple with Jacky Durand (who still looks in good nick) then asked him for an appraisal of the race so far. 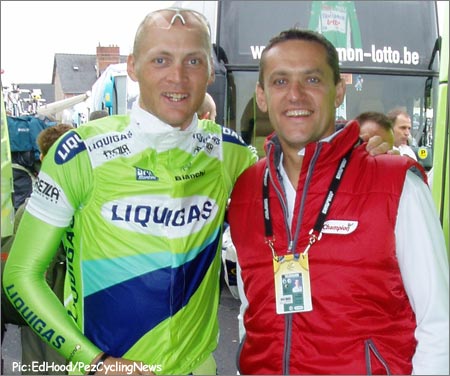 We found Magnus catching up with Jacky Durand.

He said that he was starting to feel good after a slow start, missing the early part of the year with injury hadn’t helped but he had felt good riding in the break the other day, he had only ridden the Rennes time trial at 80% though.

I asked if was a different Tour this year and he said it was as hard as always but it seemed as if breaks could ‘stick’ earlier and after less abortive attempts than usual.

He gave me the quote of the day – when I asked about the lumpy haul to Lorient he replied; ‘yeah, there will be guys in body-bags at Lorient for sure.’ McEwen has impressed him; ‘not far short of unbeatable just now.’ But he reckons that Boonen will win a stage before it is over, lack of team mates in the final kilometre being Magnus’ reason for Big Tom’s lack of a win; ‘they need to revise their tactics so he has more support at the finish, they’ve been getting burned-out chasing breaks.’ The winner? – Landis. 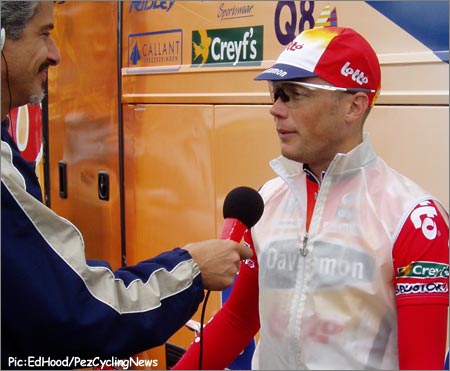 Next-up was Chris Horner, a good Tour for Lotto so far – but less good for Chris who has hit the deck twice; ‘it’s not just the injury, it’s the bed-time you loose. Both crashes were on long stages so apart from the injuries I’m down on recovery.’ He reckoned Gonchar’s chrono win was no surprise. ‘He’s been world champion against the watch before and he’s always capable of top five – if you can go top five then you can win.’

Similarly he reckoned Landis’ ride was no surprise given the form the Phonak man has displayed this year. Horner believes in precedent; ‘Kloden has proved he’s fast at Tour time, he rode a good time trial yesterday and his team is very strong, I think he can win, it’s between him and Floyd I reckon.’ 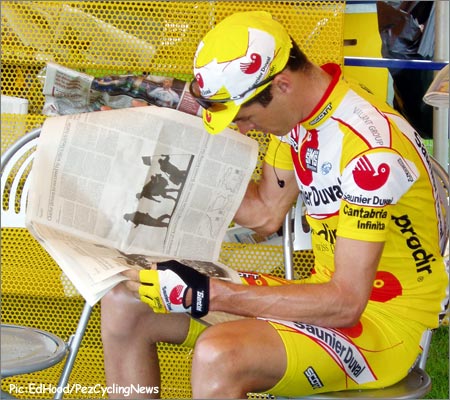 I returned to the village to see if I could find anybody interesting hiding-away with a coffee – and there was David Millar. He’s happy with the Tour so far, he’s enjoying being back, but was disappointed with his time trial at Rennes; ‘it shows how much work I have to do.’ His recovery has been good but he’s taking each day as it comes, so no goals or predictions. He says he’s: ‘curious’ about how he will go in the mountains and looking forward to the race entering that phase. 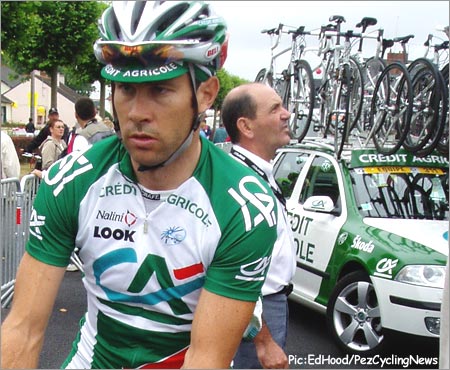 Just before the roll-out whistle blew I snatched a few words with Kiwi, Julian Dean of CA. Despite nasty road-rash he reckons his leg is OK after his crash, he’s glad that the cloud which was over the race at the start has blown over (for now). Will Thor be looking for another win to go with his prologue? ‘We’re looking for one every day in this part of the race.’

After giving James a hug and sitting numb in the car park for a minute I had an inspiration. 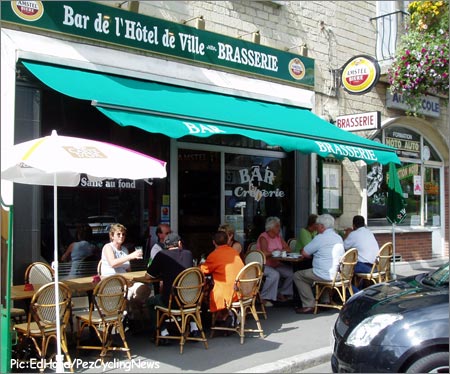 When in France, there are many options for ideal race viewing…

Two hours and a hundred miles later I was sat in the ‘Bar de l’Hotel de Ville’ in Villers Bocage deep in the countryside, the bar maid had tuned us in to Le Tour, I had my Amstel and a cafй au lait made on a Faema coffee machine (they sponsored Eddy Merckx way back when men were men), and there were six guys up the road – it wasn’t like the real-thing, but it was pretty damn good and I didn’t have a deadline.

Ed will be back on PEZ in a couple days after a safe return to his home in Scotland, and we’ll be back with part two tomorrow of the most wide open Tour in years – so don’t touch that dial!