On his mission to follow the Tour and show you the sights that no eye has ever seen and hear sounds no-one has ever heard our intrepid adventurer tackled Alpe d’Huez. Read on to find out the real story of what its like to climb the famed mountain on race day…

The beauty of the mountains never ceases to amaze me. Leaving St. Jean Montclar in the cool and misty early morning I looked out across the peaks where clouds billowed and rolled, skimming the tips of the gargantuan structures of rock and stone. Like so many things in life, beauty can be intimidating and I was a little daunted by what lay ahead before me. Today I had been charged with the mission of climbing the mistress of the mountains, Alpe d’Huez and bring you dear readers a taste of what it is to ride and watch the race from her slopes. 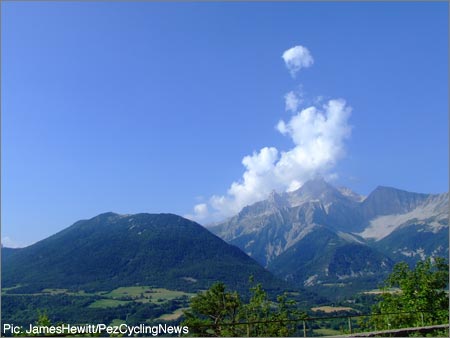 Now if you had asked me last year I would have laughed in the face of such a challenge. After all, I was in peak physical condition. However, as all those who have been in earshot of me during any of my bicycling excursions will know; I’m lacking some ‘condition’ at the moment. I was certainly hoping lady luck would shine on me today. Actually, on second thoughts, I don’t believe in luck. 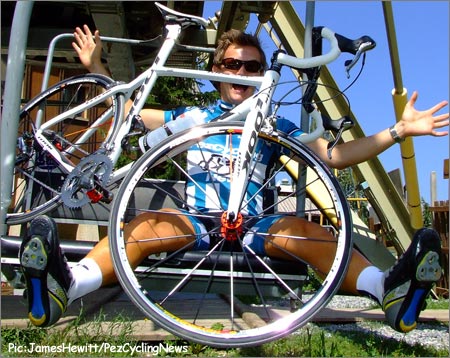 Faced with ascending the Alpe d’Huez on race day, and not wanting drunk fans dousing the new Look 595 with beer, James considered an alternate route to the top.

Lady Look?
Maybe not luck, but I’m becoming an increasing fan of the Look. Oh dear, a shameless plug and insipid pun in one sentence. Please don’t stop reading. Yes, of course I’d be riding the 595 up the Alpe today, and just as was the case on the Tourmalet, even if I didn’t have too much confidence in my form, I knew the bike would look good even if I didn’t! After driving a few hundred kilometres we pulled up the car, assembled the vйlo, I donned my dashing PezCyclingNews kit and I was on my way.

Just a brief 20km warm up before reaching the base of the Alpe to get the old heart rate up and legs ticking over. I actually felt pretty good, maybe it was the rapidly fading buzz from my last shot of espresso. After ascending the last climb before the Alpe’s home in Bourg d’Oisans I dropped down into the town. The Look handled like a dream and I was having far too much fun laying the bike down into the sweeping bends and hairpins. Maybe today wasn’t going to be such a grueller after all! 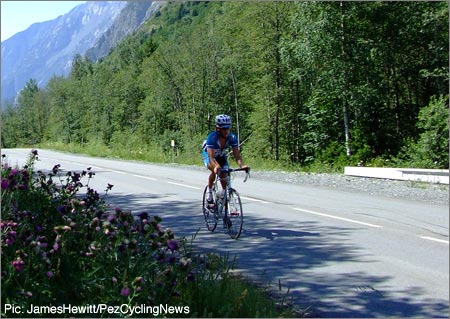 Race Day Recipe
Passing under the 15km to go banner the density of humanity began to steadily increase. It has to be seen to believed. Imagine the crowd for a football or soccer match, double it, no in fact you could probably multiply it extravagantly. Spread that sprawl of mankind across 13.8km of Hor Categorie mountain, stir in some cheesy continental rock music, a lavish outpouring of alcohol and you have Alpe d’Huez when the Tour de France comes to town; and that’s not even accounting for the cyclists! Cycling can be a solitary affair but climbing the Alpe baulks the trend. The human population of the mountain is significantly swelled for at least two days leading up the the stage and on race day itself, thousands more spectators and a plethora of cyclists also tackle the escalade. I was just one of many, of all shapes and sizes. 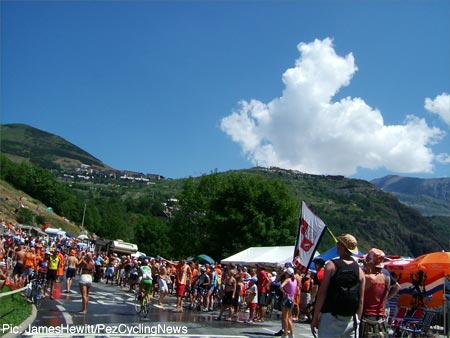 Appreciating One’s Environment
As I once again settled into the climbing rhythm I was so happy to rediscover on the Tourmalet I took the opportunity to look around at the scene unfolding before me. “One of the beauties of riding for pleasure rather than to train or race is that one can truly appreciate one’s environment don’t you think.” I thought as the first kilometre rolled by. I quickly switched myself out of Pride and Prejudice mode and back into the contemporary world.

Thank God for carbon fibre. I really mean that. That combination of raw material and the application of the human brain was really helping me to enjoy the experience of mounting the col. You may have noticed that I’ve mentioned humans, humanity and mankind several times now. A theme is emerging, a theme that reflects my overawing impression of the Alpe. People, people everywhere. I suppose that probability dictates that in such a large group of cycling fans I was destined to see at least one person I knew. 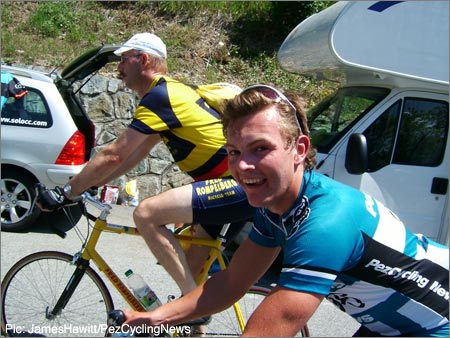 Screaming Bikini Models
Rounding one of the 21 hairpins that make up the climb I saw the familiar colours and stripes of a PezCyclingNews jersey, but not only a jersey, an entire kit nonetheless. It could only be a member of the secret society of PezCyclingNews.com writers, destined to write together in pursuit of all that is cool in ProCycling but never to meet in person.

Coming prepared in case of such a contingency I reappraised myself of the secret handshake from the Pez manual and greeted my brother Chris Selden, a contributor of Antidopean origin I believe. Chris and I had a chat, posed for a couple of photos before we were forced to flee and a hundred strong gang of screaming bikini models ran toward us drawn by the irresistible attraction of the jerseys and matching shorts. Unfortunately in my haste I was unable to take a picture. Ah well, happy memories. 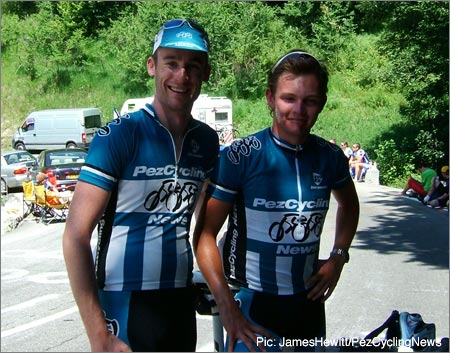 A Beer Drinking Moose
You see all types on the Alpe. Men dressed as babies wearing horned hats, crazy drunk Dutch fans. I even spotted one elite German athlete taking the opportunity to try out a novel and as of yet unpatented training and acclimatisation technique. Despite the 26C temperatures and blazing sun my friend Klaus insisted that dressing as a moose, drinking beer and attempting to climb Alpe d’Huez was the optimum protocol in order to gain maximum training and adaptive benefit. 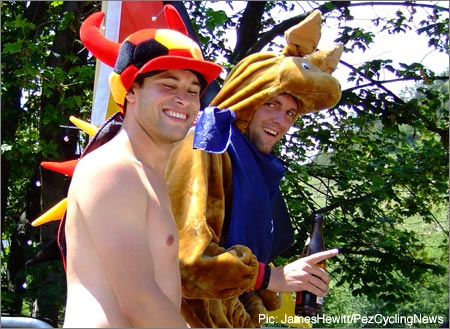 Meeting Friends New And Old
As I continued the climb I bumped into my old friend Adam Illingworth. Adam and I raced in many of the same races when we were both based in the South of France for a couple of seasons. After catching up on the latest news we got down to the serious business of discussing my new bike. Adam is riding the 585 with his team and was keen to get a look at the new model. He liked it but I’m sure I detected a hint of jealousy in there. Further up, about 3km from the summit I spied a sign for the village. An unmissable photo opportunity but a rather inaccessible location. Perched at the top of a mound of earth there wasn’t much chance I could get myself and my bike up there. Enter my new friend Jordan Thomas, another Aussie, another fan of the 595. I scrambled up, he passed up the bike and took the photo. Cheers mate!

Another chance to take a breather, I remounted, but before I’d had chance to get back in the groove I encountered my first bureaucratic barrier; the ubiquitous French Gendarme. Thankfully the press pass that I had so proudly displayed for the photo a few minutes earlier provided my ticket to climb the final kilometres. No sooner had I passed the boundary into the hallowed ground than I ran into another fellow Pezman. Randall Butler was on the case on the Alpe. Another opportunity for a first meeting in person, fortunately the classified palm grip was still fresh in my mind. Randall even snapped off a few frames of the bike and I before I tried for the summit, but not before introducing me to Georgio. Georgio is the ultimate bike fan, following the pro peloton around the world with wife and dog in tow in his camper van. What a character, not a word of English but he more than adequately conveyed his passion for the sport. 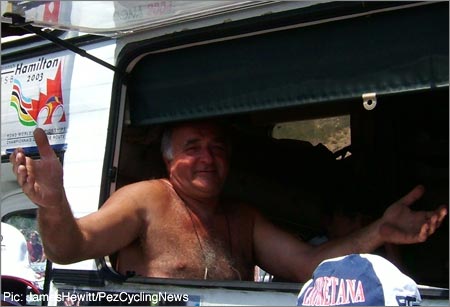 Reaching The Summit
After breezing passed the gendarme I was the only rider left pedalling to the finish. As I cruised by the barriers I found myself unexplainably picking up my pace. The reason for this increase in velocity? I was on a solo break of course, the peloton was languishing 5 minutes behind and I was racing into the yellow jersey. This fantasy endured until about 150m from the line when I was left with the final frontier. The impenetrable glare of an ASO official with no intention of letting me have my moment of glory at the Arrivee.

Oh well, like so many relationships, it was good whilst it lasted. Today was a passing fling with enduring memories. One of the most appealing aspects of road riding is that we are able to ride the same roads, on the same bikes a mere matter of hours before our heroes follow in our footsteps. But now, its back to reality. We dropped down the mountain via a little used back road and sped on to our next stop in Albertville. Check back soon for the latest addition to my Tour de France diary. 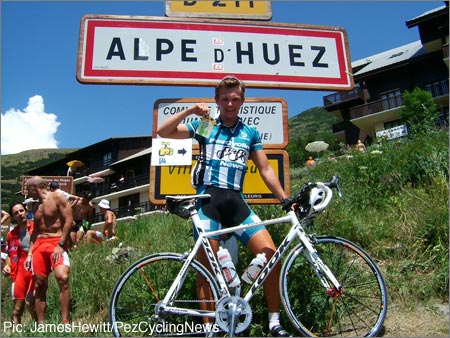