On his penultimate day chasing the race, James Hewitt gets up close and personal with a few of the stars of the sport and nearly has his bike stolen! Read on to find out how…

Quick Getaway
On my penultimate day following the Tour I made a quick getaway from our lodging next to the Autoroute in one of those charming little hostels known as a ‘Formule 1’. Nothing wrong with them but they are definitely on the cheaper side of cheerful. Once the wind had blown the aroma of exhaust fumes out of our clothes I began looking forward to our rendevous with the Village depart and its complimentary array of food and beverages. After a brief but powerful storm the blazing sun resumed its place in the sky once again above the start town of Le Creusot. I enjoyed wandering between the stands and there was an air of relaxation and calm that was uncharacteristic of the village I had seen before. A number of riders even rolled in ahead of their start times to chat with journalists and mingle. I can only presume that with only one day remaining and the time trial having little significance to those riders not still gunning for GC or stage victories everyone was starting to wind down after the three weeks of drama and pressure which accompany the Tour on its clockwise journey round France. 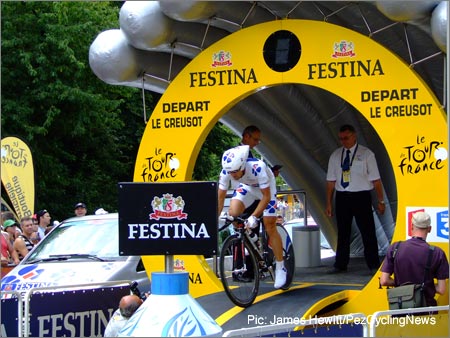 Race Of Truth
I secured a good position in front of the start house and watched the riders begin their ‘race of truth’. Many simply rolled down the ramp showing little conviction in the acceleration which reflected their indifference toward the day. With the riders classified lowest on GC granted the earliest start times most of the competitors were not targeting today’s stage but I was pleased to catch a shot of Britain’s Olympic Gold Medallist Bradley Wiggins who could well be a favourite in the race against the clock in year’s to come. Bradley is riding his first Tour de France and to get this far in such good condition is a great achievement for the Cofidis rider. 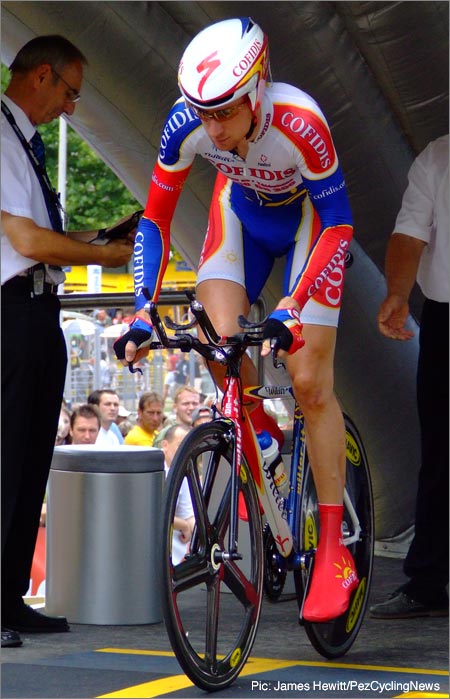 Olympic Gold medallist ‘gave it some’ from the gun.

Flings and French Girls
I amused myself for a few more minutes listening to the exciteable French MC invigorate the spectators and lead 5 second countdowns for the riders followed by a finale of claps, shouts and squeals. I then made my way to the parking for the team buses to carry out some important business. You see, today I had to give the Look 595, with which I have so enjoyed riding the roads of France, back to its owners. It has been a wonderful fling but its best not to get to attached. You know what French girls are like. I had to let this one go but I felt a tinge of sadness as I left the white machine in the capable hands of a Credit Agricole mechanic. It gave me a good opportunity to ask him what he thought of the new 595. “Well” he began with an expression of deep consideration. “All the new bikes are an evolution of the old models with some new features, but the 595 is very good.” Only Cauchioli the Italian and Thor Hushovd ride these new machines which feature the integrated seat pin and improved design. Speaking of the seat pin, the CA team are great fans. “Its excellent” he said, “it makes the bike much more rigid.” “It’s a very ‘jolie’ bike” he added. 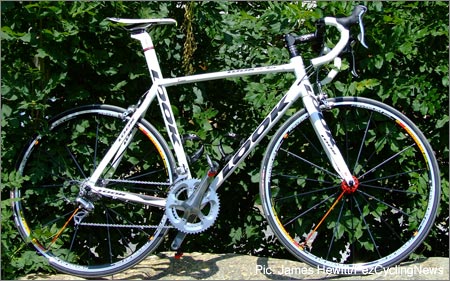 Better to have loved and lost?

Didi The Bike Tester
In all the emotion of recounting the moment of our separation I nearly forgot to tell you about our last moments together. As I was wandering to the row of team buses I spotted Didi the devil strolling around, resplendent in red lycra and matching pitch fork. I decided to stop and have a chat and it turns out that Didi was quite a fan of the 595 as well. I asked if it would be OK to get a couple of photos of him posing with the bike but no sooner had he agreed to my request he hopped on the machine and rode off into the surrounding forest! I wasn’t too concerned as even if Didi did succumb to the temptations that his costume evokes it wouldn’t be too hard to identify a bearded, bright red German with a moderately dangerous weapon speeding through a French town on a top of the range racing bike. All in all it was a very entertaining conclusion to my bike test. 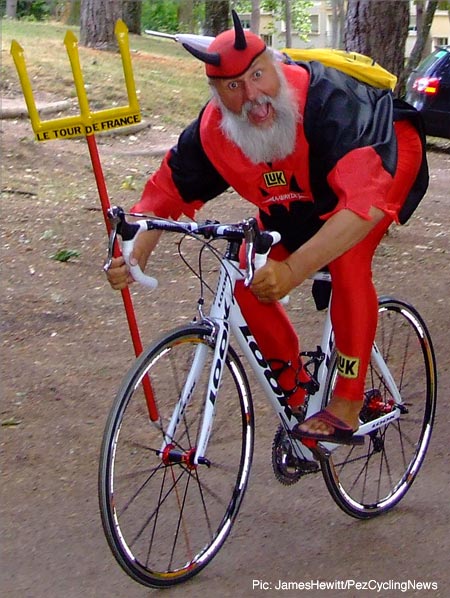 Inside Story With Landis’ Coach
Continuing my walk through the team buses I saw a few well known riders beginning their warm-up routine. Dave Zabriskie was beginning to sweat, as was Discovery Channel’s Ekimov. The man for whom all the pressure rests on today, Floyd Landis was still a few hours away from beginning his test on the start ramp but his coach Allan Lim was on hand to have a chat. Allan has worked with Floyd analysing his aero position and perfecting his power output so I picked his brain for a few minutes. Allan had no doubt that Floyd could take 30 seconds out of his rivals but I was interested to know what effect the cumulative fatigue would have on Landis at this point in the race. Seems that whilst he is still riding well there is unsurprisingly a significant drop in his power output at threshold which means that he was aiming to produce somewhere in the range of a 385 Watt average over the 56km course. In terms of tactics “in a TT like this, you have to ride your own race” says Allan. Well, after Floyd’s performance of two days ago we know he is well qualified to do that. 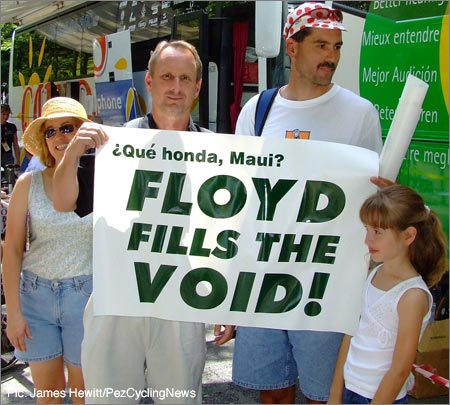 Millar Back To His Old Self
One of the great things about the compact nature of a time trial course is that its often possible to see both the start and finish of the stage. I had a chance to talk to David Millar before the start and immediately after in Montceau. Whilst signing autographs with the fans that seem to track his every move David said that “it feels like I’m just finishing a three week training block” and added that “it pains me to not be [a competitive] part of the race but I’m really happy to be here.” Immediately after his huge effort under the midday sun I followed Millar’s soigneur where I found the Scot with his face directly over the A/C vent of the team car gulping in the cold air. Whilst fatigued from his race he was clearly delighted with his performance. “It felt just like the old days” he said, and is certainly on his way to finding the race fitness that once took him to the top step of the podium in time trials around the world. 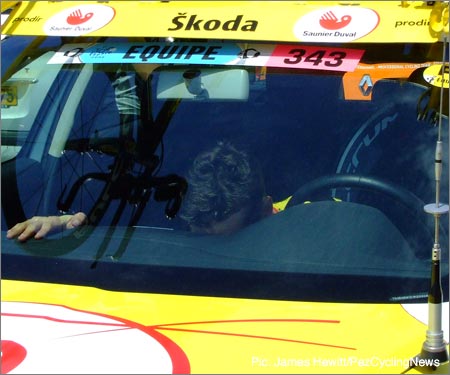 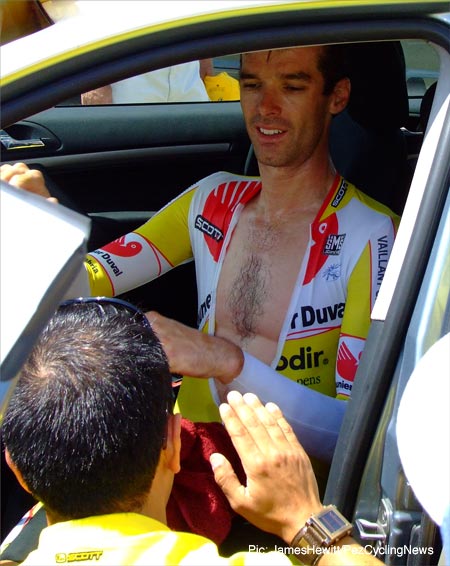 DS Maxtin gives Millar some words of encouragement after the TT

Paris Here We Come!
So as we hopped back into the car and turned up our own A/C on the final leg of the journey up to Paris I began to reflect on the last two weeks. Its been a lot of fun, I’ve met a lot of people and really that’s what its all about. There are mountains and flats, high-tech bikes, team buses equipped like hotels, heart rate monitors, SRM telemetry and TV cameras but really, it’s the people that make it happen, it is them who make the stories. So if you haven’t started vomiting into your bowl of oatmeal by this point on my commentary, come back tomorrow for the PEZeye view of Paris. Courtesy of
VeloSport Vacations I’ll be on a balcony overlooking the race course whilst sipping an ice-cold Perrier!