Shooting the Tour de France on the Champs Elysees is a great assignment and an opportunity that very few photographers can experience. While the fans are set back from the famous boulevard making getting a good shot all but impossible, the working shooters are right in the thick of the action.

There are a few ‘must have’ photos and it can get a bit chaotic in the finale of the race. But all the characters play their role and the day goes off like a well orchestrated ballet at 70+ kph. Here is a look at what’s involved in bringing you the photos on the Tour’s final stage in Paris. 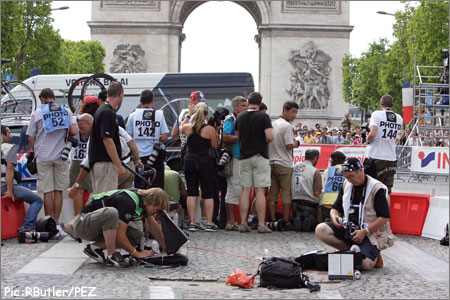 Photogs arrive early to get ready.

One of the favorite shooting spots is at the end of the Champs Elysees below the Arc de Triomphe. The red and white barriers that are used to divide the road for the course are flared out to allow for the photo pool to set up shop right in the middle of the race! The photographers begin to arrive around 2:30 before the pre-race caravan. 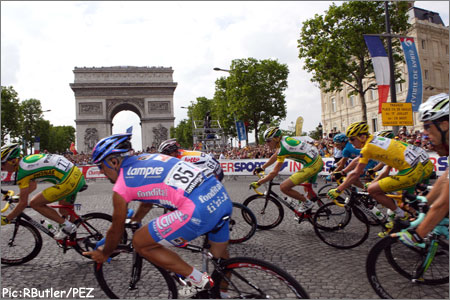 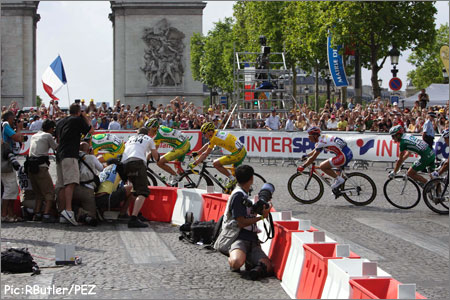 One good thing about circuits? You get a few chances.

Everyone is trying to get a shot of the yellow jersey passing beneath the Arc de Triomphe. It can be bit tricky because the shot is directly into the sun. When the riders arrive for the first lap the shooting is intense. You have to find the jersey, compose and focus the shot then hope no-one moves into the image at the last second. The first lap is the easiest because the yellow jersey normally is on the front. There is some neat technology involved and the shots can be processed and submitted wirelessly right from the roadside. 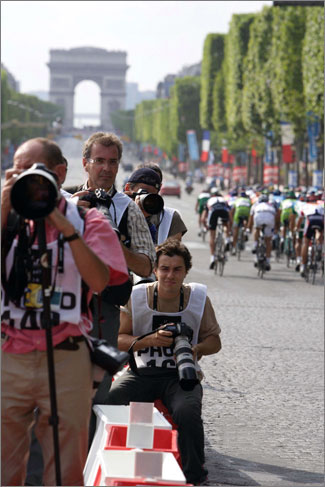 The field setting up for the final sprint.

You have a couple more laps to get your shots then you begin to walk to the finish line to catch the final sprint. Along the way you try to get some shots of the enormous race caravan making its way along the famous boulevard, silhouetted against the Arc de Triomphe. 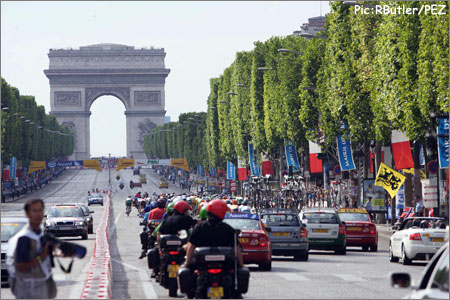 The Tour caravan is an impressive beast.

The caravan is long enough that you may have cars and riders passing you on both sides of the street at speeds up to 70 kph so you have to be careful! 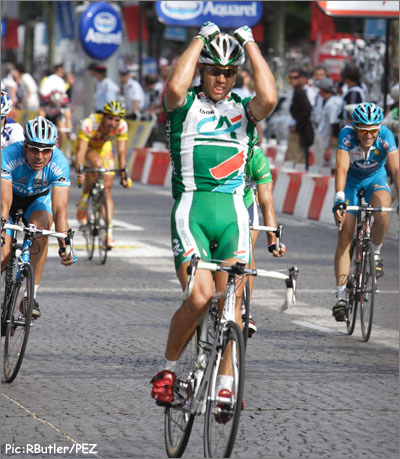 One lap before the sprint the photographers set up behind the finish line on either side of the road. The pack comes flying through the finish and into the chicane of photographers and film crews. On Sunday Thor Hushovd was bearing down on us at over 70kph with no hands as he celebrated his stage win. 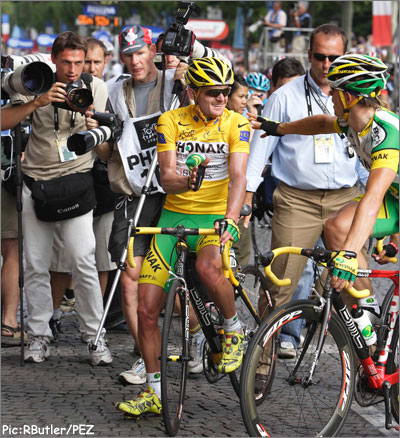 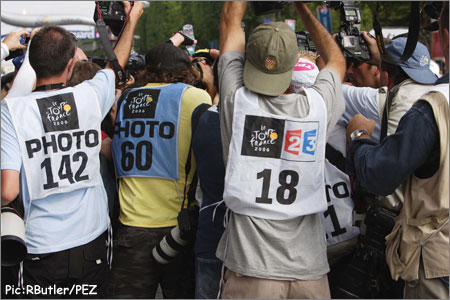 A matter of moments separates these two pics: immediately post-stage Floyd has a 1/2 second to breathe, and then…the locusts.

Floyd Landis stopped shortly after the line which presented a rare photo opp. Once everyone spotted him he was immediately engulfed by a scrum of photographers asking him to pour water over his head – a photo that became popular on Floyd’s St 17 ride. 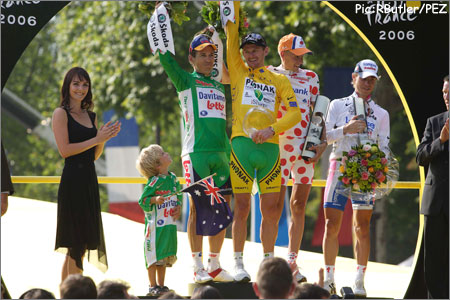 Taking shots like this is a can’t miss opportunity.

Shortly after the race ends organizers move the podium into the middle of the road. Several stands are set up for the photographers and the ceremonial presentation of the jerseys begins. By the time the ceremony ends you have been shooting for a few hours. Now it’s off to the press hall or the hotel where the work begins on processing and submitting the images. It’s a long day but its one of the best opportunities in sports photography! 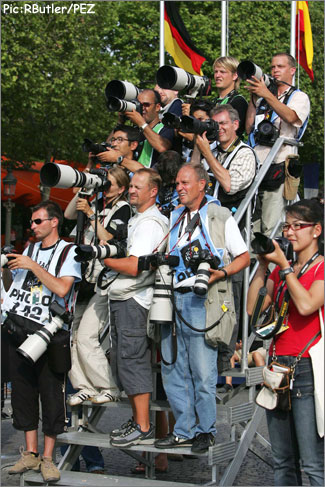 As a photographer at the Tour de France – you are not alone.