The English cycling press have been talking it up for months, the “big show down” between Olympic pursuit champion, Bradley Wiggins and former Prologue winner David Millar. You can’t call ‘em ‘best friends’, so we tracked them down before the start of stage 1 to talk about their blast through the streets of Strasbourg yesterday. 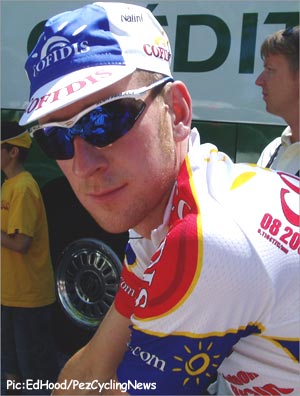 The fact is that Wiggins, whilst a wonderful pursuit rider, has no big chrono victories to speak of and his greyhound build and technique – well suited to the velodrome – are not what are necessary for prologues. 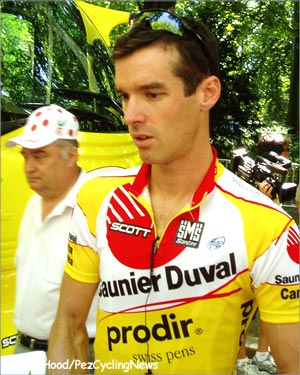 Millar is another matter, he’s won one Tour opening test before and would have won two more but for crash and an unshipped chain, the question was – could he make-up for his lack of racing in a training situation?

The answer revealed itself yesterday, he finished 17th, one place behind Wiggins, there’s not a lot of love lost between them so that one place will annoy Millar.

HERE’S WHAT THEY SAID..
Pez: Give us your assessment of your prologue ride please.

Brad: I was pretty pleased really, it’s my first Tour, so it’s just good to have got it over and done with. I rode a good second half, the first half of the race with all the bends I just couldn’t get it right, I was 45th at the first check but pulled that back to 16th at the line.

David: I think I under estimated the enormity of the whole thing, I was too relaxed before it and as soon as I rolled down the ramp I knew it wasn’t going to happen. Given that it is my first race in a long time it was an OK result, the lack of racing means that you don’t have the top end.

Pez: How did you rate the parcours?
Brad: It was a technical first half and as I said I struggled a bit to start with.

David: Yeah, good, it was a classic prologue course, no complaints.

Pez: It was windy out there wasn’t it?
Brad: Yeah, it was very windy for a city centre course, it played a big part, I had a block head wind for the last 3 kilometres.

David: It was hard, yes, like I said my lack of racing didn’t help.

Pez: With the number of bends on the course would it have been better to ride a road velo?
Brad: No, whilst I lost time on the bends early I would have lost a lot more time into that head wind for 3 kilometres on an ordinary bike.

David: No, no, it was no problem at all on the time trial bike.

Pez: What are your thoughts on the stage seven 52 kilometre test at Rennes?
Brad: Its a bit too far for me to think about doing anything.

David: Yes, that’s a beautiful circuit. I’ve no doubt that I’ll go better there, my legs will be unblocked after another week of racing.

Pez asked Millar about his new Scott time trial bike, which is so special that the Saunier Duval folks wouldn’t let us photograph it. 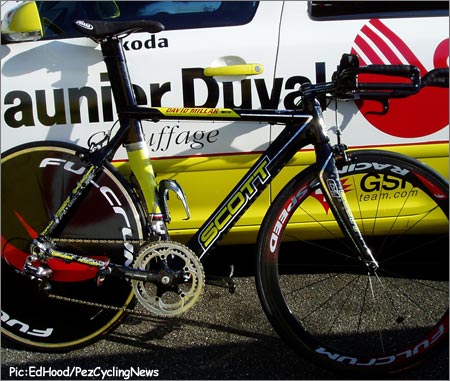 Pez: The new bike is a beauty David, how much input did you have and what about the graphics? 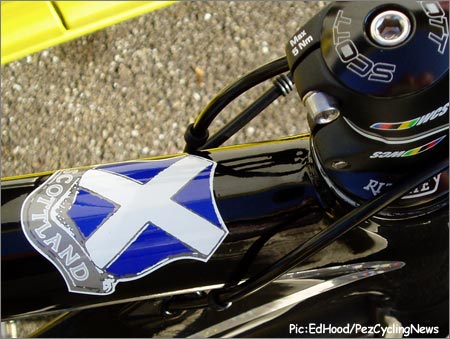 David: I can’t get into specifics, but I had total input and I can tell you that I’ve got the bike I want. The Scott guys did the graphics though – the bar code on the top tube and the stage finish maps on the stays, I had no involvement in that. 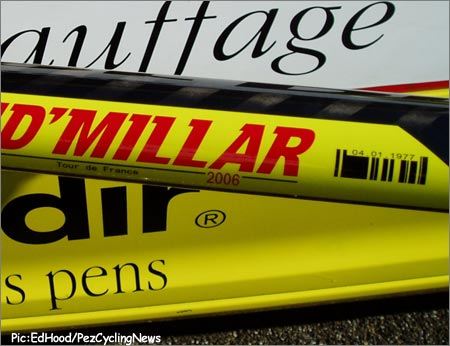 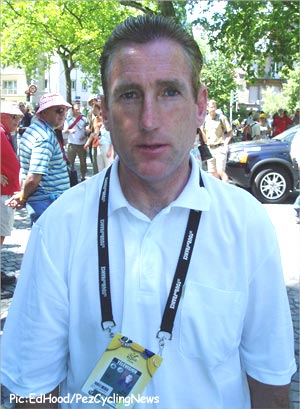 • And a final word on the prologue from Sean Kelly: “It was a surprising result. I’d have put Hushovd down for a place, but not the win. It was a strong man’s course so it definitely suited him. The prologue is such a special race and if you make even a couple of little errors on those bends then that’s it gone. I think Wiggins did a better ride than I expected and Millar’s ride was all he could expect after just coming back. I think maybe Zabriskie got a couple of corners wrong, he was the guy we all expected to win.”