Today’s Stage 10 to Marseille may not have been the most exciting 5 hours of bike racing, but under the experienced eye of Chris Carmichael there was a Tour’s worth of racing packed into the final 1000 meters. Analyzing the sprint reveals some sharp lessons for any racer…

Every amateur racer should watch the finish of Stage 10 for a fine lesson in what – and what not to do, in a sprint. Pack finishes are much harder to analyze and learn from because they are more chaotic by nature. But the scenario we saw in the final kilometer of today’s stage will play itself out in countless road races and criteriums, so let’s use it to increase your chances of giving a two-armed salute like Cedric Vasseur’s.

– By Chris Carmichael –
1000 Meters Out
The group of five rode into the final kilometer together in a long line, but they weren’t directly behind each other. Jens Voigt was leading, in a position he knew wasn’t ideal. He would have rather been a few wheels back in order to be able to accelerate in another rider’s draft, but that was the position he was in, so he made the most of it. He positioned himself all the way to the right side of the road, against the barriers, so he only had to watch for riders accelerating on his left.

He was going to have to react immediately to an acceleration from behind in order to get on a wheel and have a chance to come around again by the finish line. That’s a lot harder to do when you have to watch for riders coming on both sides. If you’re stuck having to lead out a sprint from a small group, closing off one side is exactly what you want to do because it allows you to keep an eye on everyone. 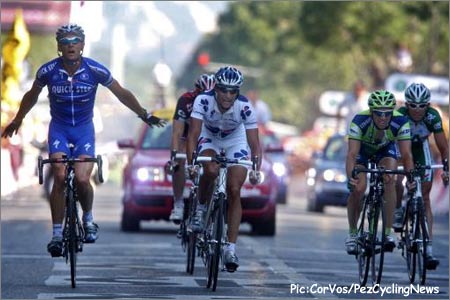 Cedric Vasseur used his years of experience (he’s 37!) to beat the younger faster guys to the line.

The other riders lined up diagonally to the left behind Voigt because doing so gave each of them a clear line to the finish. If the third man in line, for instance, was lined up directly behind Voigt, he would have had a rider directly in front of him, no room to move to the right, and a rider on his left. That’s not a good place to be because you’re blocked in and it’s hard to find a clear lane to get through to the front.

The fifth rider in the group, Cedric Vasseur was in a position that could have gone either way. Starting a sprint from five wheels back leaves you a lot of ground to make up, but it also gives you a chance to observe what’s going on in front of you and exploit any opportunities that may arise. If you watch the replay of the sprint, between 1000 meters and 700 meters, he was drifting left and right at the back of the group. If there’s an advantage to being at the back of the group, it’s that you’re not committed to staying on anyone’s wheel and you can keep your options open.

500 Meters To Go
Not much changed between 1000 meters and 500 meters to go because at the end of a long stage, and a long breakaway, no one had a tremendous amount of power left in their legs. Generally speaking, the longer the race, the shorter the sprint. This is especially true when you’re coming to the line with a relatively small group. When the whole pack is coming in together and there are organized leadout trains, the sprint can still be relatively long, but even then it will probably only be about 500 meters at the most. When riders are tired, it’s important to keep the sprint short because you’ll reach you maximum speed quickly but you won’t be able to hold that speed for very long. If you open the sprint too early, you’ll be slowing down as you reach the line and someone who didn’t jump as hard will have time to come back and beat you at the line.

300 Meters To Go
Here’s where Jens Voigt made a critical mistake. He was watching the riders to his left, but instead of staying close to the barriers on the right, he drifted toward the center of the road and opened a gap to his right. None of the riders in second, third, or fourth positions could exploit that opportunity because their front wheels were even with the hip of the rider ahead of them – on the left side. As a result, they were committed to sprinting straight ahead or to the left.

At the back of the group, however, Vasseur wasn’t committed to a wheel so he was able to take advantage of Voigt’s mistake. Not only that, but he was able to accelerate into the draft behind Voigt before shooting through the gap between the German rider and the barriers. By the time Voigt or any of the others realized he had jumped, he was at full speed with a sizable gap. Sandy Casar, who on paper was the fastest sprinter of the group, almost caught Vasseur at the line, but “almost” is the very definition of second place.
Cedric Vasseur is getting long in the tooth for a professional bike racer, but at nearly 37 years old he also has more than a decade of experience to draw on. He used that experience to outsmart and outkick men who were probably stronger than him today, and as a result, he stood atop the podium as the winner of Stage 10 of the 2007 Tour de France. Learn from him, and from Jens Voigt, and you too may win your next race.

The next audio workout in the Do The Tour… Stay At Home™ series is Stage 13, a workout designed to prepare you for long individual time trials. But today, there’s a text workout available that mimics the long, steady efforts riders faced today on the two giant climbs of the Col du l’Iseran and Col du Galibier. Check them out and download Stage 13 to your iPod at TrainRight.com.