Race Analysis St. 11 – Ever since Alexander Vinokourov hit the ground a week ago in Stage 5, his rivals have seized on every opportunity to put him in difficulty and further behind in the overall classification. But with the help of some strong winds and smart riding, Vino exacted some revenge today, and there may be more to come from the crazy Kazakh…

It’s normally very difficult to split the peloton on flat roads because you just can’t go fast enough on the front of the field to overcome the immense advantage riders have behind you in the draft. But when the wind is coming in from the side, like it was today, a dozen committed riders at the front can shatter the peloton into pieces. 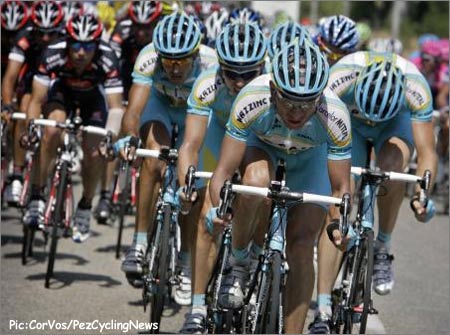 The Astana boys took control in the cross-winds and effectively eliminated at least one gc rival.

The fracturing of the pack happens in stages. First, as either the wind or the route changes direction and results in a sidewind, riders move to the leeward (opposite the wind) side of the rider ahead of them, but the pack is still spread across the entire width of the road. Since the riders on the windward side of the peloton can’t get a draft, they start losing ground and also start desperately looking for a way to weasel their way into a better position.

Within a few minutes of riding in a strong crosswind, only the front of the peloton will be spread across the road; and the back two-thirds can be stretched out in a long line in the leeward gutter. Speaking from experience, it’s absolute hell to be fighting for a non-existent draft in the gutter. And it’s not just a hard place to be, it’s dangerous from a tactical standpoint because all it takes for a big gap to open is one rider losing contact with the wheel in front of him.

And that’s what happened today. The Astana team used the wind to their advantage and rode like animals on the front of the peloton to force a split. This is the second phase of crosswind racing. Once the splits open up, the resulting groups form echelons, or diagonal pacelines where the lead riders are on the windward edge of the road and the riders behind line up with their handlebars even with the leeward hip of the rider ahead of them. The size of an echelon is limited by the width of the road, and if you’re not in the first group, you’re in big trouble.

It’s important to be attentive and fight for position as soon as you encounter sidewinds because the strongest riders always end up in the first echelon. If you’re in the second, third, or fourth group, you’re surrounded by weaker riders and your chances of making it back to the front of the race dwindle quickly. If you’re in the front group, now’s the time to but your head down and go for broke. The wind may disappear at any moment, and you need to take maximum advantage of the situation while it exists. 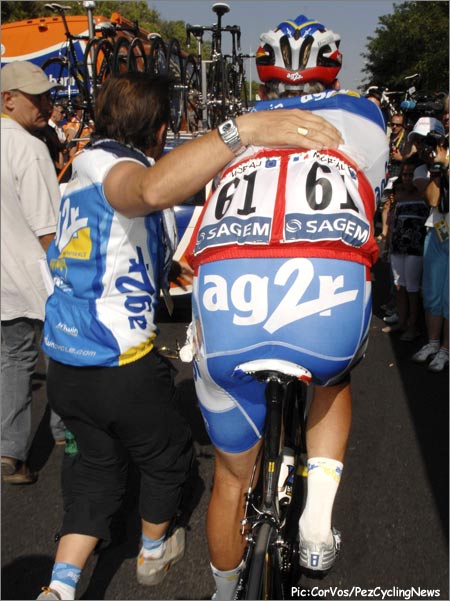 Francis Moreau suffered the brunt a Tour-style gang-bang, first crashing with his own teammate, and then having half the bunch ride him out of the race.

That’s why we saw several teams collaborating in the front group today. Astana started the aggression, but they received help from Discovery Channel and Caisse d’Epargne because AG2R’s leader Christophe Moreau was in the second group. Then Quickstep-Innergetic and Barloworld started helping to keep Thor Hushovd and Erik Zabel from making it back to the front of the race as well.

Working in an echelon is tricky, which may be why you rarely see amateur racers successfully execute them. The rotation of the paceline is toward the windward side of the road. The lead rider pulls at the windward edge of the road and then drifts straight backward when he pulls off. Let’s say the wind is coming from the right. As the lead rider drifts back, the rider to his left moves diagonally forward and right to take the lead position. The rider who pulled off then starts moving diagonally back to the left until he reaches the leeward side of the road. If everything is working properly, he’ll then be able to move straight forward to a position even with the left hip of the rider to his right. As the rotation continues, he’ll gradually move to the right until it’s his turn to pull again. And if you want to reduce the size of the echelon, the lead rider can move toward the center of the road instead of staying on the windward edge.

The biggest lesson riders can learn from Stage 11 of the 2007 Tour de France is that you have to act quickly when the wind starts coming in from the side. Splits in the field happen really fast, and once the damage is done, it’s very difficult to bring the peloton back into one piece. I spent a lot of time racing in Belgium and northern France, where the wind howls off the ocean all the time. And since riders are so attentive to the wind, the echelons form in seconds. You’ll often see three or four echelons, one right behind the other, sometimes just a few meters apart. The riders at the back know it’s their only chance of staying in close to the front group, and then you just have to hope that a change in direction lets you move up enough to be in the first group the next time the echelons form.

Today, the split in the field just kept getting bigger, and as it grew Christophe Moreau saw his chances of standing on the podium in Paris all but disappear. Moreau may have the best form he’s had in years, but he’s not a strong enough climber or time trial rider to take minutes out of the other yellow jersey contenders. He’s not out of the race by any means, but it’s going to be very difficult for him to make up the three minutes he gave away today. That’s what you get for messing with Kazakhstan.

The next audio workout in the Do The Tour… Stay At Home™ series is Stage 13, a workout designed to prepare you for long individual time trials. But today, there’s a text workout available that mimics the long, steady efforts riders faced today on the two giant climbs of the Col du l’Iseran and Col du Galibier. Check them out and download Stage 13 to your iPod at TrainRight.com.

LeMond On LeTour: The Finale Begins