Carmichael Sez: Get Through The Bunch

With a constant headwind, high temperatures, and a bunch of tired and battered riders, the peloton was spread across the entire width of the road for much of Stage 6, including the final surge to the finish line, and riders had to do a lot of close-quarters maneuvering to get their jobs done. Moving around in the peloton takes skill at any speed, but it gets even harder when the field is tightly packed like today. Whether you’re bringing water to your teammates or trying to find a clear line to sprint for the stage victory, getting through the field is a challenge.

Even when the peloton is riding at a very consistent speed, the distances between riders are constantly changing. And though there might not be much distance between them from side to side, slight changes in speed open up small passing lanes diagonally between riders. It is through these that you can gradually meander your way up through a tight pack, and on a relatively relaxed day like Stage 7 of the 2007 Tour de France, the riders you’re passing don’t generally mind and will give you some space to move when they can. 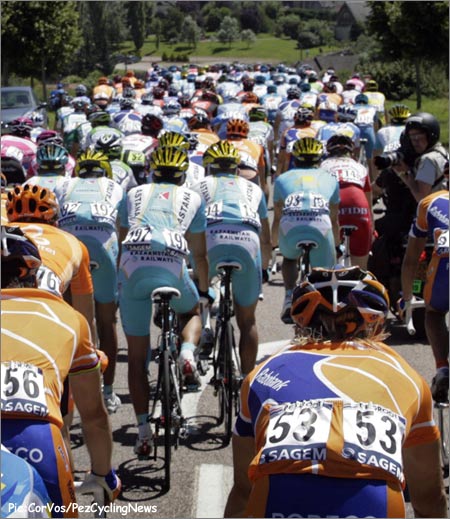 Good luck getting through this pack… unless you know a few tricks.

Consistency and predictability are two keys to moving through a tight peloton. You don’t want to make the riders around you nervous by appearing to be out of control or hesitant. Moving steadily and decisively also leaves no doubt about where you’re going. That means the riders around you can act accordingly. Many crashes in the peloton happen because one rider moves and the rider behind him either didn’t expect it or didn’t know where that first rider was going. The best guys in the peloton are the ones who move up so smoothly that you barely even know they came by you.

Be careful, as well, not to move through a gap too hard. If you stomp on the pedals to move up one space, you’ll most likely end up hitting the brakes. This has a ripple effect behind you and makes it more difficult for those riders to stay at a consistent pace. It takes some practice to get it down, but once you figure out just how much power you need to move up without having to tap your brakes, you’ll be able to cruise up through the field like a hot knife through butter.

Now, getting through a tight pack in the middle of long road stage is one thing. Working your way to the front of a charging group of sprinters is another. One thing that’s the same, however, is that passing lanes open up as riders speed up or slow down – it just happens a whole lot faster in the final kilometer and there’s a lot more at stake. Sprinters have great peripheral awareness and either see or sense riders coming up on their sides. This helps them decide whether to go left or right around the wheel ahead of them, but a lot is also up to a combination of luck and experience. A few days ago at the end of Stage 4, Robbie McEwen chose to go left and ended up boxed in with the barriers on one side and riders on the other. With nowhere to go, his sprint was over.

One man who’s having no luck getting through the peloton is Mark Cavendish. The young British sprinter is in his first Tour de France and was up near the front in the final kilometers of today’s stage, but he put his front wheel into stage winner Tom Boonen’s rear derailleur and ripped out a bunch of spokes. He was in the most unfortunate position possible in terms of riding in close quarters. A few inches further back and he would have just rubbed wheels with Boonen – something he could have recovered from. A few inches further forward and he could have leaned his arm against Boonen’s hip and kept their bikes apart. But he was in those critical few inches where wheels and derailleurs get destroyed… along with Cavendish’s hopes of winning his first Tour de France stage.

Neither Cavendish nor any of the other sprinters will get another chance to sprint for a stage win until probably Thursday of next week at the end of Stage 11, because tomorrow the Tour de France enters the Alps. The first day in the big mountains can be very telling for the yellow jersey contenders, and by the end of tomorrow, at least one pre-race favorite won’t be looking like a contender any more.

LeMond On LeTour: Into The Alps