You have to be patient to win the Tour de France, and patience doesn’t always come easily to aggressive competitors. Michael Rasmussen bided his time through the first week, sat in during the first day in the big mountains, and on Stage 8 was rewarded with not only the polka dot jersey, but the yellow jersey as well. But for me, the real story of the day was the patience that Alejandro Valverde exhibited on the roads to Tignes.

To understand the significance of Valverde’s ride today, you have to have an sense for history. Jose Miguel Echavarri is the boss of the Caisse d’Epargne team, which used to be the Banesto team, and he was the director sportif when he guided Miguel Indurain to five consecutive Tour de France titles in the 90s. Echavarri’s preferred style of racing leverages the distance and the terrain to his riders’ advantage.

Under his leadership, Indurain rode conservatively in the mountains, always staying close to the front but not launching many explosive attacks. Indurain was such a dominant rider against the clock that he didn’t need to win mountain stages. He just had to ride hard enough to limit the amount of time gained by the climbing specialists, and then take back all that time, plus minutes more, in the long time trials. 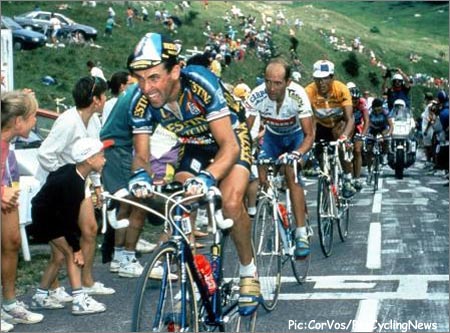 Big Mig was a master at keeping his cool – never doing more than he had to even when under attack in the mountains from guys like Luc Leblanc and Marco Pantani.

Alejandro Valverde is nowhere near the time trial rider that Indurain was, but Caisse d’Epargne seems to be taking a page out of the Indurain play book in the 2007 Tour de France. Today was the first major mountain showdown for the yellow jersey contenders, but there’s a lot of racing and a lot of mountains left in this Tour. There’s a time and a place for explosive attacking, but Caisse d’Epargne didn’t think it was today, and I think they may have been right.

Valverde did what he needed to do to stay with the front group of yellow jersey contenders, and he gained a little time on riders like Alexander Vinokourov, Andreas Kloden, Levi Leipheimer, and Denis Menchov, but he never actually attacked. We know he can accelerate like a bullet when he wants to, and he’ll need to because he doesn’t have the speed to take minutes out of his rivals in a time trial, but there was no reason to burn those matches today. There are harder days coming, where bigger efforts will reap bigger dividends. 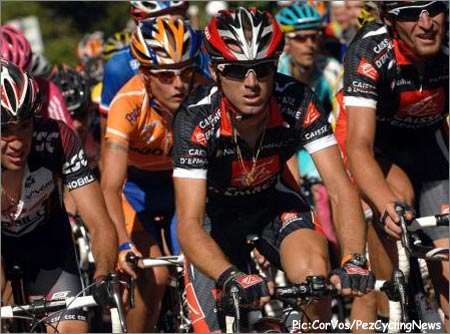 Alejandro Valverde’s steady riding has kept him high on gc in the first days of the Alps.

The other rider who displayed similar tactics was Levi Leipheimer. He appeared to be reasonably comfortable riding in the group being paced by Andreas Kloden, and though he lost a little time to Valverde, Christophe Moreau, and Cadel Evans, he had the benefit of a reasonably steady effort compared to the constant accelerations in the group ahead of him.

At the end of the day, there’s only about a minute spanning fourth through 14th place, and the only yellow jersey contender who’s really outside that group is Alexander Vinokourov. So, even though it was a thrill to watch, all those attacks and accelerations didn’t amount to big time gaps. Patience may have been the best tactic for Stage 8, and the winners in that battle appeared to be Valverde and Leipheimer.