Getting stuck in a crash inside the final 20 kilometers of Stage 1 isn’t exactly how Robbie McEwen planned for his day to go, but experience, a level head, and a bit of luck all combined for the Aussie’s 12th Tour de France stage win. Along the way, he demonstrated the perfect techniques for utilizing teammates and the cars in the caravan. There are lessons in there somewhere for all of us.

1. Stay Calm
McEwen was stopped with a large group of riders, and the stoppage blocked the road so the cars couldn’t get by either. It’s important to know where the caravan is, and in today’s case, it was stuck behind the riders. That means that when it gets moving again, there will be plenty of opportunity to draft. T-Mobile rider Mark Cavendish lost his cool when he had continuing problems with his bike or wheels, and part of the reason may have been – besides youth – that the majority of the caravan and the other riders who had been delayed were already in front of him. The scenario you’re trying to avoid is being off the back with only your own team car, or even worse, only the neutral support vehicle. They may be forced to leave you behind because they need to move up and support riders who are still with the main field. 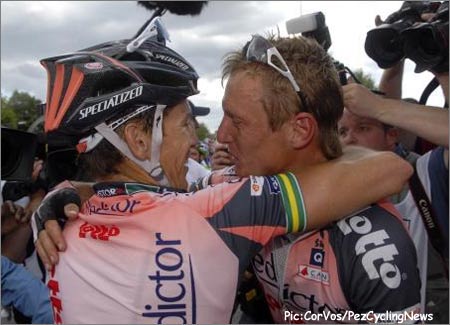 Using your head to regain the bunch may lead to surprising results – and unabashed displays of affection from team mates.

2. Be Patient In The Cars
With the adrenalin pumping through your veins, it’s tempting to just open the throttle and time trial past all the cars to get back into the peloton. Don’t do that, you won’t make it. And if you do, you’ll be totally out of gas when you get there and you’re likely to get popped off the back on the next hill. The directors in the cars know it, too. They can watch you go by their car and tell immediately if you’re going to make it or not.

What you have to remember is that the cars are always speeding up and slowing down, whether it’s for curves, corners, hills, or to look at cute girls at the side of the road. When they’re going faster, you want to be drafting and looking forward for opportunities to move up without using any energy. When the cars start to slow, you can swing out of the draft and keep your speed and move up to the next car. Now, when the cars speed up again, you may not be able to stay on the bumper of the car you’re with, so you might end up moving backwards a car or two until the whole line of cars slows down again. That’s why it takes patience to get through the caravan without burning a huge amount of energy.

Safety Tip: If everything is working smoothly, the cars will get out of your way in the corners. This takes some foresight on the part of the drivers and riders, which is why I wish there were more of opportunities for American amateur racers and directors to learn how to ride and drive in a caravan. If you’re driving a team car and there’s a rider coming up behind you as you’re heading into a corner, you have to determine if you can get the car through the corner without impeding the rider’s progress. If the answer is no, then pull the car to the outside of the turn and stop of slow dramatically so the rider has a clear line through the inside. If you’re in a long line of cars, things get a little more complicated because you also have to make sure the entry and exit lines are open for the riders. You have to look at the corner like a rider – and then put the car on the opposite side of the road from where you’d want to be if you were on a bike. And if you’re the rider, you have to stay alert, no matter how much you trust the directors in the cars.

3. Timing Your Final Bridge To The Peloton
OK, so you’ve moved up through the cars and you’re getting close to the race commissar’s vehicle. They’re not going to like you sitting on their bumper for a long period of time – technically you have to be continually trying to make progress. However, the commissar’s car is sometimes 200 meters or more behind the last rider in the peloton, and that’s a big gap to cross if the pace is high. So, hang back a little bit and be patient, maybe chat with the directors in the first few cars, until the peloton is slowing down and the commissar’s car is closer to the back of the pack. Then you’ll be able to shoot across the gap with very little effort.

Once you’re back in the peloton, don’t just sit at the back. You’re already in a “moving-up” mentality, so stick with it and get yourself back up to the first third of the field. McEwen managed, with help from his teammates, to go from being in the cars to winning a sprint stage at the Tour de France in about seven kilometers. It wasn’t easy to do, but it was possible because of the experience and skill of every driver and rider in the caravan.