To be a Tour de France sprinter, you need the combined attributes of an elite athlete, a fighter pilot, and an acrobat. Across the sport of cycling, there are other riders who can rival the power and top speed of the men who finished in the top 10 in Stage 4 of the 2007 Tour de France, but power and speed alone won’t get you to the finish line first in a bunch sprint. To beat today’s winner, Thor Hushovd, to the finish, you first have to physically battle him for position and make better split-second decisions than he does. Good luck with that.

There’s nothing courteous about getting into the best position to start a sprint. Instead, there’s a lot of pushing, shoving, and bumping. Over the years, NASCAR drivers have famously said that “rubbin’s racin’”, and it’s a testament to their courage and handling skills that Tour de France racers can stay upright while banging handlebars at more than 40mph. Personally I think there’s a part of being a field sprinter than cannot be taught; guys like Tom Boonen, Thor Hushovd, Robbie McEwen, and Erik Zabel are just wired a little differently than the rest of us. But there is a lot about sprinting that can be learned, and even if you’re never going to rub shoulders with Thor Hushovd in a sprint, learning from him may help you win a sprint against the local hotshots. 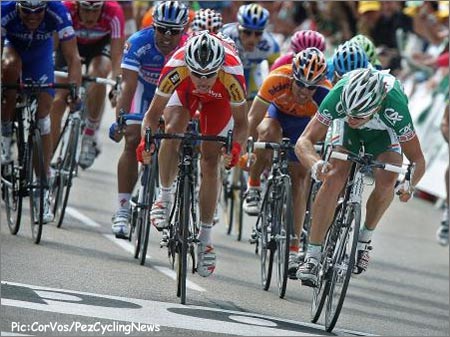 Sprint Like A Pro
1. Hands I The Drops
You’re in a more stable position over your bike when you’re sprinting with your hands in the drops. Compared with riding on the brake hoods, your center of gravity is a bit lower and there’s a bit more weight on your front wheel. Not only do you have more control over your bike, but you also have a better ability to absorb and counteract impacts from riders on your sides.

2. Head Up
When the going gets really tough, riders tend to drop their heads and look down. This is a really bad idea in the middle of sprint because when you look down you’re more likely to move off a straight line and steer to one side. Whether you’re leading the sprint or getting passed, keep your head up and your eyes on where you want to go. When you’re watching a sprint at the Tour de France, take a look at the last leadout man as he gets swallowed by the pack. He doesn’t have time to veer to the side to let the sprinters go by. Instead, he’s swarmed by riders going by him like he’s standing still. But even though he’s exhausted and done with his work for the day, his head doesn’t drop. He keeps looking forward and riding in a straight line – riding predictably so the others can get around him safely – all the way to the line.

3. Don’t Throw Your Bike Side To Side
Pulling on the bars is a big part of a winning sprint, but throwing your bike far to the sides shouldn’t be. When you pull on the bars, it’s part of making a stable platform for your legs to push against so all your power goes down into the pedals. When the bike goes flying to the sides, you’re wasting energy and increasing the chances that you’ll cross wheels or tangle your bars with someone else.

4. Use Your Shoulders & Elbows For Protection
If you’re regularly involved in sprints, there will be a time when you come in contact with a rider next to you. If you have to lean on them to stay upright or hold your line, use your shoulder or elbow to keep them from encroaching on your space. You’re trying to protect your handlebars, because it’s far more difficult to stay in control when you’re literally bumping bars. And while you’re sprinting, your elbows are the widest part of you. If your elbows fit through a hole, the rest of you can fit through. To get comfortable with this, practice leaning on people while sprinting in training and moving through holes between riders during group rides.

5. If You Cross Wheels
Crossing your front wheel with another rider’s back wheel is about the worst situation you can encounter in a sprint. There’s no one to lean on, and of the two riders involved, you’re the one who’s going to go down. The rider in front almost never falls – and sometimes doesn’t even know another rider crossed his rear wheel. Your only chance for saving yourself is to steer away from the wheel, but that can be very difficult if your weight or momentum are to the same side of your bike as the rear wheel you’re hung up on. Try pushing forward and down with the hand opposite the problem. In other words, if the right side of your front wheel is hung up on the left side of the wheel in front of you, push forward and down on the left side of your handlebars. Sometimes you’ll save yourself, sometimes you won’t, and sometimes it’ll happen so fast that you won’t have time to do anything before you hit the pavement. Recovering from a crossed front wheel is something you can practice, but do yourself a favor and practice on a grassy field.