What a day to be a Belgian! The 2nd stage of Tour de France finished in Ghent and not only did a Belgian rider win the sprint, but his countryman was right behind him in second place. But as much as Gert Steegmans and Tom Boonen deserve the credit – the slight uphill finish played its part in the outcome too…

The result was good enough to give Boonen the Green jersey, but did you happen to see how big the gap was back to third place? Tour de France sprints are often decided by a few centimeters, but no one else was even close to Steegmans and Boonen today. 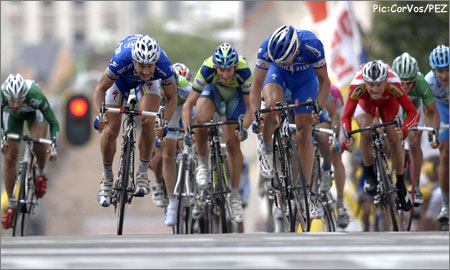 The long camera lens really shows the rise in the road – it gained 25 meters altitude inside the last few hundred meters.

The finishing straight of Stage 2 was slightly uphill, which changes the dynamics of a sprint finish and makes it more likely that a leadout man like Steegmans can actually win the stage or finish ahead of some of the other favorites. On a flat run-in to the finish line, the speed is higher but the rider in front is fighting more air resistance. This places some more advantage on riders further back because they have the opportunity to accelerate in the draft and slingshot around the competition at the last second. When the finish is uphill, however, part of your power is being used to overcome wind resistance and part is overcome gravity. In other words, passing is more difficult in an uphill sprint, making it harder to win from four or five riders back in the group.

This changes the strategies of top sprinters. It’s beneficial to have a leadout train for the final kilometers, but it’s also important to have your last teammate lead you to a point closer than normal to the finish line before pulling off. This shortens your actual maximum-power sprint, which increases the likelihood that you’ll make it to the finish line before you start to slow down. If you start sprinting too early on an uphill finish, you’ll fade and be passed because it’s more difficult to keep your speed up.

Typically, a finish like today’s favors sprinters like Robbie McEwen who are characteristically more “punchy” sprinters. The Aussie who won Stage 1 is known for having an explosive acceleration as well as a blistering fast top speed. Bigger sprinters like Tom Boonen – and Gert Steegmans – are more favored to flat-ground sprints with higher starting speeds. Today, however, it seemed that McEwen lost one of his key leadout men – American Freddy Rodriquez – in the crash just inside of 3 kilometers from the finish, and he wasn’t able to get through to the right position for the sprint itself.

Of course with a Belgian leading out national hero Tom Boonen in Ghent, one of the centers of Belgian cycling, it may not have mattered if McEwen had been in the perfect position. Same for Thor Hushovd or anyone else. Sometimes when you add national pride to the already-extreme motivation to win a stage of the Tour de France, riders find an extra gear that no one else can access.

While the Belgians will be celebrating tonight, probably at least one ride from each team in the race will be nursing injuries sustained in the crash that blocked the whole road just within three kilometers from the finish. The injury reports will be coming in throughout the evening, and some riders may not know until tomorrow morning whether they will be able to start Stage 3.