Watching Fabian Cancellara steal today’s stage with such swashbuckling panache marked is true champion status. But his sticking it to the sprinters, the breakaway, and every one else wasn’t just dumb luck… as Chris Carmichael explains with a closer look that might help you win a few races yourself.

– By Chris Carmichael –
What’s not to like about Fabian Cancellara? He’s the Time Trial World Champion, he crushed everyone in the prologue, probably crushed a few riders when he flew onto the top of yesterday’s pileup, and then surged ahead of the best sprinters in the world to steal Stage 3 right out from under their noses. Bike racing is a terribly hard sport, but one look at Cancellara’s face tells you he’s having a blast.

So, how does a time trial specialist win a stage that, on paper, is tailor-made for the green jersey contenders? He did what every aggressive bike racer does: he looked for a split second opportunity and went for it without hesitating. You would think that this is an easy concept for bike racers to grasp and take to heart, but I’ve seen many riders with the strength to be champions but not the savvy. 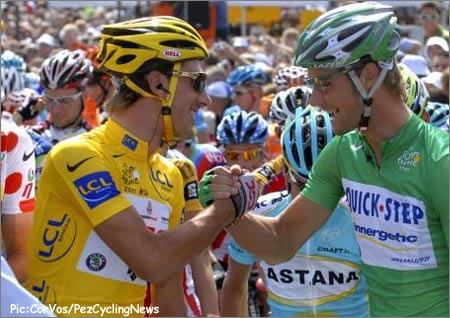 Cancellara’s path to the podium today started with great positioning. He knew, like everyone else, that there were a few nasty cobbled corners right around 1000 meters from the finish line, and he and his teammates made sure he was right up front to stay out of trouble. And this time, he was really close to the front because hanging back just a little bit put him right in the middle of a big crash yesterday.

So, here’s today’s pop quiz. You’re a big and powerful time trial rider who has a decent sprint, but you’re not fast enough to go head-to-head with Tom Boonen and Robbie McEwen. You come out of the last corner surrounded by sprinters with about 700-800 meters to go to the finish line and a there’s group of four dangling a few meters off the front. What do you do?

Well, 700 to 800 meters is too far from the finish for the sprinters to let it rip, so they’re going to be looking around for their leadout men and fighting for wheels. But you have no trouble riding at maximum speed for 800 meters, so it’s time to go. But you can’t hesitate. At 60 kph, riders cover 100 meters in about 6 seconds, so you need to get as far ahead of the sprinters as possible before they start their charge for the line. Fortunately for you, the quartet ahead have been off the front for hours, so they’re going slower than you. Ride right up into their draft to gain even more speed before you slingshot past them. 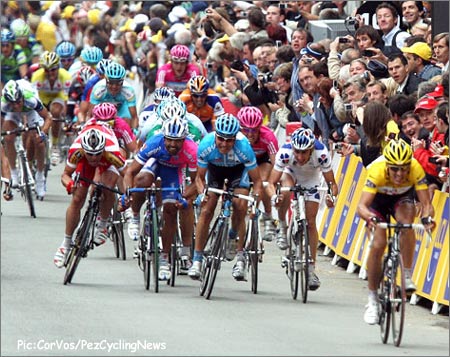 Athletes throughout amateur and professional cycling frequently face situations like the one Fabian Cancellara found himself in today. It’s the scenario of a little climber coming into the final lap of a criterium with a bunch of burly sprinters, or the big guy trying to figure out what to do a few kilometers out from an uphill finish. The best way to improve your chance of winning is to look for an opportunity to attack at a time that doesn’t suit the riders around you. If you’re with sprinters, go early. They won’t want to waste their sprinting power chasing you so they’re likely to look around to see who else will go after you. If they wait too long, you win.

For the big guys trying to win uphill finishes, use your power advantage on flat ground before the climb to push the little climbers over their limits. Keep attacking them, because they know they’re only hope is to stay with you until the climb, where the advantage shifts to them. But if you break them before they even get to the hill, you’ll have a time gap to exploit and hopefully they’ll be so spent that being lighter isn’t enough to help them beat you.

One of the important things I try to teach athletes is that you can’t just go for the wins that seem to suit your body type or riding style. Champions are always looking for a way to win, and though you’re going to lose more often than you taste victory, nothing beats winning a race you “shouldn’t” have.