TDF Analysis After Stage 18 – The moment the finish clock stopped on today’s race, another clock started running. This one counts down the start of tomorrow’s 55.5-kilometer individual time trial. With the top three riders separated by only 2:49, the yellow jersey is still very much up for grabs, and everything that happens between the end of Stage 18 and the start of Stage 19 will have an impact on the final standings in Paris.

7:00-10:00 PM: Back at the team hotels, riders move through the well-oiled routines of cleaning up, eating dinner, and getting a massage. Throughout, there’s time to relax, chill out, and maybe catch up on phone calls and emails. Riders have individual ways of unwinding after a stage, but with an important time trial tomorrow, guys like Alberto Contador, Cadel Evans, and Levi Leipheimer know they need to stay relaxed and calm tonight. 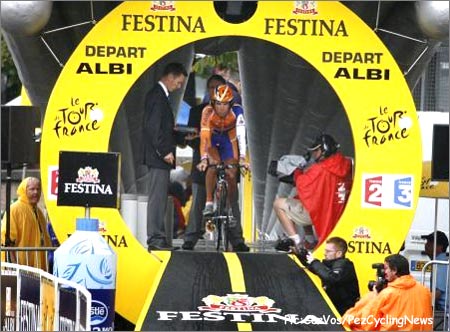 10:00-11:00 PM: A lot of riders won’t have any trouble going to sleep tonight, because they’re pretty tired after nearly three weeks of racing. The men fighting for the yellow jersey need to get a good night’s sleep to perform at their best tomorrow, but anticipation for a day that could change your entire life can make for a restless night. However, the ability to relax and stop your brain from running a thousand miles an hour all night is part of being a champion athlete, so I’ll bet they’ll get a better night’s sleep than a lot of us will.

Saturday Morning
It’s harder to pinpoint times in the morning because riders will be on different schedules based on their start times for the time trial. Many riders will wake up around their normal time in the morning, and have a breakfast that’s pretty similar to before a normal road stage. Even though the top riders won’t start until the late afternoon, the final pre-race meal before a time trial is typically pretty small, so eating a good breakfast ensures that riders top off carbohydrate stores that were depleted overnight. Some of the riders who have early start times will have to wake up a bit earlier than usual to have their pre-race meal and enough time to warm up. A normal road stage starts between 11:00 AM and 1:30 PM for everyone, but a time trial spreads the start times across about a four-hour period starting at 10:43 AM.

The top men in the Tour de France will go out and pre-ride the time trial course to look for places where they can go all out and places they need to be careful. Knowing how fast you can go through corners is an important part of keeping your speed as high as possible in a long time trial. This won’t be a hard ride overall, but they will bring the speed up at times loosen up their bodies.

Early Afternoon
After pre-riding the course, it’s time to relax and eat. Most riders eat their last full pre-race meal about three hours before the start of the time trial, but it’s usually a bit lighter than the pre-race meal before a road stage. The time trial is very hard, but it’s only about an hour instead of being four to six hours like a road stage. Another reason for a lighter meal is that a lot of riders prefer to feel a little hungry going into a time trial effort, or at least they’ll try to avoid feeling too full.

90 Minutes Before Your Start Time
Since a solid time trial warmup routine takes about an hour to complete, riders often aim to leave the hotel for the start area about 90 minutes before they have to race. Once they are on the bike pretty quickly and they get started with their warm up. During this 90-minute period, they’ll continue to consume calories (primarily carbohydrates) from sports drinks, and maybe a PowerBar or gel. They’ll also consume plenty of fluids during their warmup, up to about two bottles depending on the rider.
A long warm up prior to a time trial ensures that you have thoroughly activated all of your energy systems and your body’s cooling mechanisms as well. But it also has to include hard efforts in order to get the job done. It may seem counterintuitive to use a lot of energy right before a big time trial, but you’re using that energy to prepare your body to be able to produce maximum power right from the first minute you roll off the start ramp. Holding back during the warmup just means you’ll go slower in the race.

10 Minutes Before Your Start Time
When your warmup is done and you get off your bike, the mechanics take it out of the stationary trainer, put your race wheel(s) on, and it’s time to head to the start house. Timing is everything. You don’t want to stand around too long between the end of your warmup and the start of the race, but you also can’t risk being late. Even with a good support staff around you, it’s still the rider who’s ultimately responsible for showing up on time.
Once they’re in the start house, riders have individual ways of dealing with the final minutes before they roll down the ramp. Generally, though, there’s not a whole lot of talking. When you clip your feet into pedals, the countdown that started yesterday evening is done. Now there’s a new countdown from the starter, a quick wave of the hand, and it’s show time.

The next audio workout in the Do The Tour… Stay At Home™ series is Stage 19, the final individual time trial. Time Trial World Champion Mari Holden joined me to record an interval workout that’s specifically designed to help you train at race pace, just like she did to prepare for World’s and just like I had Lance Armstrong do in the winter and spring before the Tour de France. Check it out and download it to your iPod at TrainRight.com.