LeMond On LeTour: The Finale Begins

In this final part of our series discussing Le Tour de France with 3-Time winner Greg LeMond, we take a closer look at the real racing that begins with Saturday’s TT, heads into the hardest days in the Pyrenees, and emerges in Paris…

We were talking about how hot it gets in the south of France, especially during the transition stages from the Alps to the Peyrenees…

Greg: l remember one Tour in 84, it was so hot – 100 degrees. I dragged a mattress and dragged it out – we were staying in a big village of condos… like a resort – and I had my mattress out in the middle of all these places with just a sheet over me. But I had to get out of the building because I was suffocating… The heat down there can be very very bad… some of the hottest places in France.

PEZ: The long Stage 13 Time Trial in Albi – this is gonna be one of the best we’ve seen in years because the true leadership of the race hangs in the balance, and it’ll be gloves off from here on out…

Greg: 54 km in Albi is NOT an easy time trial – and if the heat is up, there’s gonna be a lot of thought about the coming days, because you go from the time trial to the hardest stages of the Tour for the next three days. The TT is gonna be a perfect day for riders to get dehydrated but it’s also gonna really establish the leader of the Tour de France. 54 km is not a short race, and the road materials in this part of France are slower, they’ve got more tar on it, and if it’s hot you almost feel like you’re standing still. It’s gonna be a place where a good rider can put several minutes on a challenger. It could like the time trial where Lance had a bad day with the dehydration… you could go through 4-6 bottles to be hydrated and hold that energy.

So the stage to Montpellier is gonna be one of the days where the main guys kind of look at each other and go “… why don’t we just race at 80% today…?” 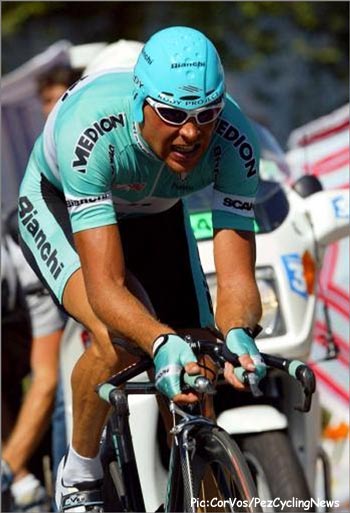 The Stage 12 TT in 2003: in Gaillac near Albi, was a scorcher – the heat melted both the pavement and Lance as he suffered a race TT defeat to der Kaiser. The real TDF07 starts here.

PEZ: What is the fatigue like going into the Pyrenees – at two weeks into the race and just coming out of some really hot days?

Greg: If it’s really hot on those three transitional stages and there’s a strong sidewind which would cause some very aggressive racing, those days will be a lot more tiring. But that’s what’s great about the Tour – you’ve always got a race within a race within a race – there are guys in the peloton thinking that some of the favorites are gonna want to rest, so there will be guys who want to take advantage of that to get away. 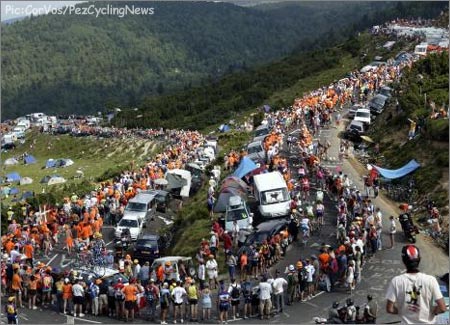 PEZ: The Stage 14 to Plateau de Beille – It’s got two big climbs, 197km long, a long 70km grinder that goes up to the base of the first HC climb, a summit finish, to me looks like a stage for some fireworks…

Greg: I’ve never climbed the Plateau de Beille, but it’s a 1000m climb, 16km, pretty steep – this will be a big stage. Some guys who don’t have gc hopes might hold something back in the TT, but never the gc guys. The time you lose in a TT can never be made up. 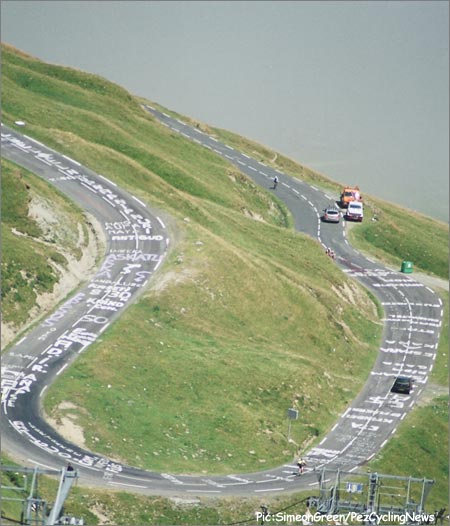 The roads in the Pyrenees have their own special ‘characteristics’.

PEZ: What are the differences between the roads in the Pyrenees and the Alps…

Greg: They’re slower – they’re more granular, not as well maintained. The Alps get a lot more use with all the ski areas – the Galibier is almost like a highway… very large road, the pavement is better. In the Pyrenees, the roads tend to be more narrow, and they feel almost a little more suffocating – there’s more humidity. I’ve always liked the Alps ‘cuz I felt better in them. Even though I’ve had good stages in the Pyrenees, they’ve never held any magic for me for racing or training.

But they’re dangerous stages that are always hot. The Alps have more alpine wind currents and the air is a little fresher. The Pyrenees are a lot more oppressive and suffocating, a lot more dense trees. 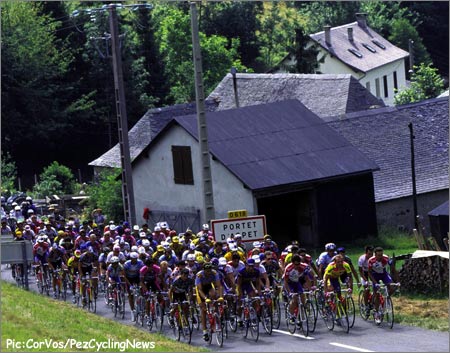 This is a grueling Tour de France.

If there’s no clear favorite it’s gonna be one hell of a Tour de France cuz it’s day after day of pretty demanding races.

Greg: Rest days are always dangerous… It’s crazy to think this, but you could be going great, and then you take the rest day and some people feel worse… I’ve never liked rest days – I wanted to keep going… so this could be another very rough stage. It’ll be the last balls to the wall mountain stage where they try to win something..

The Col de Marie Blanque is a very steep climb – that’s where I flatted in 1990 and Chiappucci attacked – . It’s a very steep climb, and Col-Aubisque – in 1985 I had to push Hinault to maintain his lead. It’s probably one of the more beautiful climbs in the Pyrenees. This mountain is much more open, like the Alps – 16km, 7% grade – but that’s average – there are pitches that go way up above that. 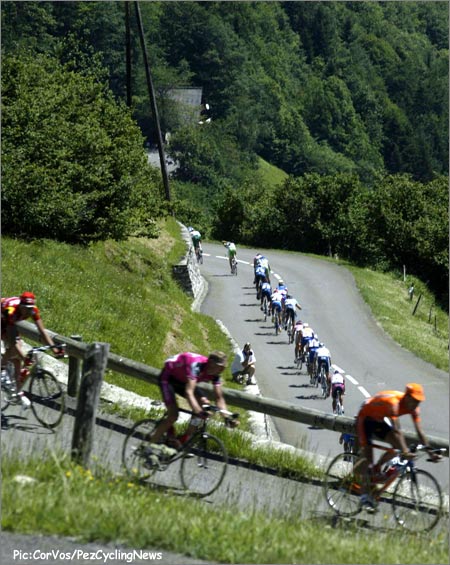 More forest, less pavement, and just as much work in the Pyrenees.

And in the 80’s we were limited by gear selection. I probably used a 42, and just in -85, 86 did we get 39’s. And using an SRM you’re able to see that your power output with too big a gear really goes down – too much force and not enough velocity. We definitely pushed too big a gear back in the 80’s, with no SRM’s or knowledge of how you produce power. 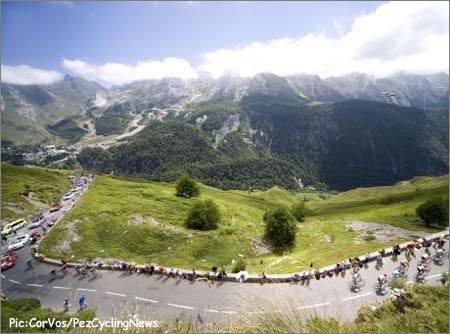 The mystical Aubisque – first used in1910 and often featured as part of the Queen stage.

PEZ: Once you’re through the Pyrenees there are only 4 stages left to the end – a couple flat days, the TT, and the parade into Paris. What’s the mood in the bunch with Paris almost in sight?

Greg: [laughing] It all depends on what the racing was like… And climate and temperature affect the aggressiveness of the race – if you go through a heatwave, there’s gonna be a lot of relief, and to me, this is a day that the favorites are gonna be relieved to get to these stages. In my period of racing this would have been looked at as “oh, good, let’s take it easy…” But I haven’t seen that for quite a few years until last year. People were saying how tired they were… well [laughing] join the real world! In bike racing, you should be really tired after a three week stage race. 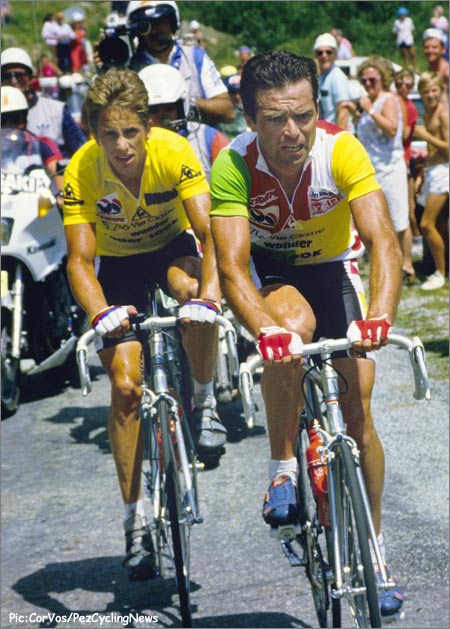 Greg battling his number 1 challenger and team ‘leader’ in the ’86 Tour.

PEZ: The Stage 19 TT from Cognac back to Angouleme The final time trial and then the last day into Paris – What about that TT & how do you remember those days riding into Paris, seeing the Eiffel Tour after 3 long long weeks…

Greg: If it’s close that could be a decisive day for the GC. If the race is already set by minutes, it’s not gonna decide anything. But I have a feeling this year it’s going to be real close. A lot of guys will be racing for position in the overall. And I think there’s gonna be a helluva relief when that’s over because then it’s your last day… And the last day is like…. ‘finally it’s over…’

In 1986 I took the lead from Hinault but I went through the time trial, I crashed, I was paranoid, I thought things weren’t on the up and up (people wanted me to lose), it just became a horrible last 4 or 5 days because all I wanted to do was survive and get to Paris. Whereas in ‘89 I won on the last day, and in 1990 I only had one more day to go, and it’s such an easier way to finish the Tour. 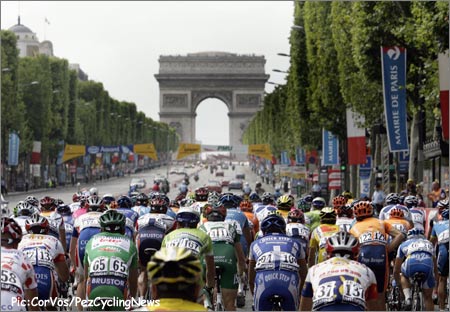 So I think that whoever comes into this last stage with the lead –this will be the celebrating day and everybody will be genuinely happy to be done. It’s kind of a gentleman’s agreement that it’s gonna be an easy day, but it still comes down to a real race to the finish.

PEZ: What’s the party like Sunday night in Paris?

Greg: It depends on if you won or lost! My most memorable win and party afterwards was 1990 with Team Z, the team manager Roger Zanier – you couldn’t find a nicer family – he owned a big boat, and we went out and everybody was drinking bottles of champagne and by the time it was 3-4 in the morning, they had to make an emergency stop to get more champagne – we were dancing with the grandmother till 5:00 in the morning… it was really a special experience. 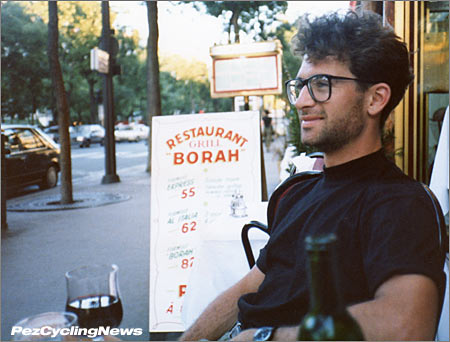 Summer 1990 – The Pez back in Paris after le Tour, and judging by the look on my face, I was feeling downright Parisienne.