The riders make the race – so the saying goes. So maybe the course makes the riders…? We checked in with Greg LeMond, an authority on the Tour de France more credible than most, on what the 3 weeks of parcours will for the riders. Here’s our look at Week 1, as told by the three-time Tour Champ…

For any English-speaker the dual stage opener in cool Britannia is about as good as it gets – sure they drive on the wrong side of the road, but the country that brought us pubs on every corner, ‘Page 3’ girls AND punk rock certainly knows how to entertain. And from what we’ve seen m the bike racing should be pretty good too…

Greg tells us: “The first 10 days of any Tour de France are really for the gc riders to try and stay at the front and avoid being taken down and lose time in a crash. They’re basically saving their energy, conserving everything (usually) for the first time trial, or the first mountain stage.” 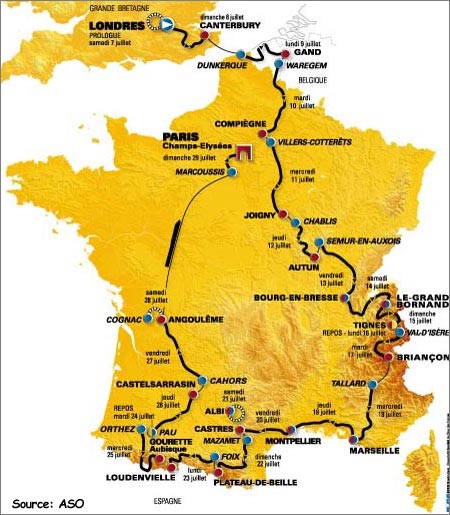 Fair enough, but that’s no reason for the gc big boys to ring for a wake up call at stage 7… And we all know racing through Belgium and northern France is some of the toughest there is – the Spring Classics didn’t become “Classics” for no reason. But let’s jump back to Swingin’ London to start…

The British Openers
Greg Sez: I lived in Europe for 14 years but never really went to London, I did Goodwood Worlds – and what was surprising was how nice the riding is in England.

“In 1994, my last year my head was buried to the handle bar and I was barely able to keep up, but I did notice how beautiful the English countryside was – groomed woodlands and groomed pastures and houses, and that’s what I remember – and that’s what the second stage will be like. The roads are very similar to France – they’re fairly narrow… It’ll be similar racing to France. But I think it will mean less to the French riders and the Italians than to the English speaking riders. 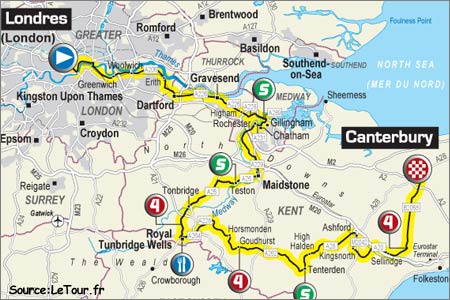 Stage 1 from London to Canterbury: 203m of twisting turning English countryside – with 4 rated climbs to award the KOM jersey, and a finish just minutes from the Channel transfer.

PEZ: Is that Channel crossing an issue in delaying arrivals at hotels and adding fatigue to the riders and crews?

Greg: No, the Tour de France is so well organized… I’ve been through that on the train and that’s a very easy transfer. We’ve had Tours… back in the 80’s where we’d literally get done with a 250km stage, and then have a 90km transfer by car, which is even more stressful [than train]. These transfers are really well organized and it’s painless. 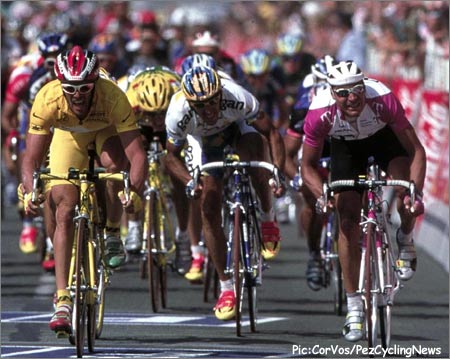 Sure – there’ll be sprint-a-plenty come week 1, but with so many gc hopefuls, we might just see a decent number of breakaways.

Four Strong Winds
PEZ: The opening stages in France – running across Belgium. With your knowledge of these roads, can we expect anything other than the usual sprintfest?

Greg: Dunkirk to Gand [St. 2] – this is the area that I lived in a raced in, so I’ve probably ridden all those roads, and the way they’re positioned, there’s usually a side wind (coming off the North Sea). Belgium is just a windy country and there’s always a chance to have a lot of wind – and that would be the biggest factor – you could get the group split up into 10 echelons…

PEZ: Waragem to Compiegne – St. 3 – another flat stage to the south – the big question is the cobblestones and it looks like they’ve left most of them out.

Greg: Even if they use some of the Roubaix cobbled sections, they’ll come so far from the finish that it should be no problem catching back up if you have to. Most likely there could be a headwind all the way to Compiegne, which will cause the race to be a little more … passive. 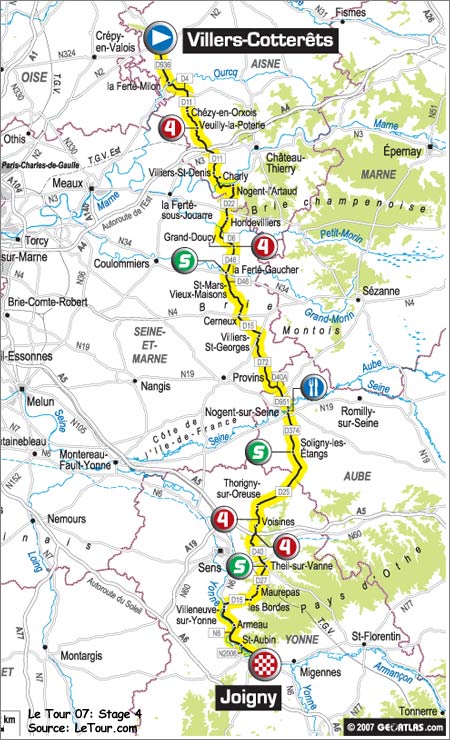 Stage 4 from Villers-Cotterкts to Joigny – 193 km of twisting turning French countryside – the gc contenders will hope for a non-threatening break, but that’s no excuse for napping.

PEZ: So lots of wind, pretty flat days, stay out of trouble sounds like defense to me, an dif everyone’s riding defense…

Greg: As a gc rider this is all just getting’ through. The sprinters will be trying to win the stages, the guys who have no hope for gc will be trying to break away or get a win before they hit the very difficult stages.

These pre-Alps stages with the small climbs can be a little riskier than you think – they’re the first real physical test with these small short climbs. Sometimes these stages can be surprisingly difficult, especially changing from the rhythm of high-speed flat racing to all of a sudden the rhythm is climbing. 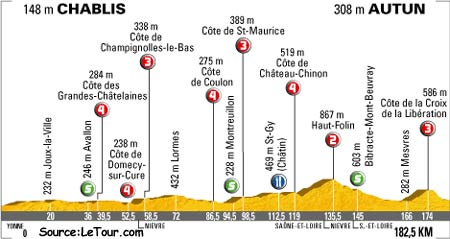 Stage 5 to Autun could be a danger point for sleepy gc men.

The next stage, Chablis to Autun [St 5] – this could be a surprising day and catch people off guard because they don’t expect much (it doesn’t look that hard) but, it’s got a lot of turns, a bunch of small cat 3-4 climbs – this could be a very favorable stage to have a breakaway, and this could be very aggressive where the terrain could split up the group, or a group could get away,

PEZ: You mentioned the gc riders really looking to save energy through the first week… but they’re still riding 5 – 6 hours, how much energy can you save?

Greg: It can be pretty dramatic. If you’re using a powermeter and you watch the difference, you could be sitting in a doing 200 watts and a 130 heart rate, but if you’re up front fighting the wind, you could be at 400 watts and 160-170 heart rate. That’s why you have team mates – if there’s cross winds, or a need to move a leader up to the front… Although at that level of fitness, expending a little more energy to get to the front is not catastrophic.

But when you think of a three week race, and if you have some strong riders that can make sure you‘re always out of the wind, it will definitely make a huge difference.

—
Pez Sez: So the first week – maybe not as boring as I first predicted back in October. We’ve seen it before, lots of times – the race for Yellow taking on a different dimension when a week 1 escape sticks and riders gain huge amounts of time – Chiappucci in 1990, Voekler in 2004, even Peirero last year…

So I’m amending my original call on week 1 – it’s now a coin toss that could go either way – how’s that for taking a stand? With no clear favorite waiting to be attacked by the others, we could see a defensive (ie: boring) race as everyone sits fearfully waiting for the others to make a move. On the other hand, and the most desired scenario for any sport-loving fan, will be a wide open slugfest of teams looking to attack and place riders in every move – partially as defense against losing an advantage, but more importantly to either gain valuable time for a gc contender, or simply buy some insurance for the stages ahead by forcing other teams to do the chasing.

This sucker won’t be won in the first week, but as always for a few unlucky contenders it will be lost. And it is Le Tour, and that does tend to bring out the best in a rider. Keep it dialed to PEZ for all the action.

Next week, our part 2 of our series with Greg takes a look at the race through the Alps.