LeTour 07: London’s Grand Depart “A Stroll in the Parks”!

Following huge speculation in the UK over the last couple of weeks, the route for the start of the 2007 Tour de France was announced today in London. PEZ was there to sample the hi-falutin’ fare, and of course scoop the poop on the London loops…

The event hosted by Mayor Ken Livingstone, Jean-Marie Leblanc and Christian Prudhomme (Leblanc’s 2007 replacement) was a “who’s who” of British cycling – all gathered to hear the details of what promises to be a great few days for the City. 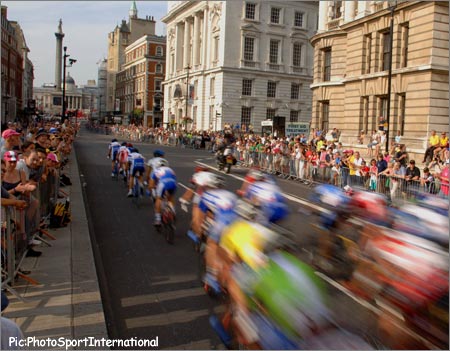 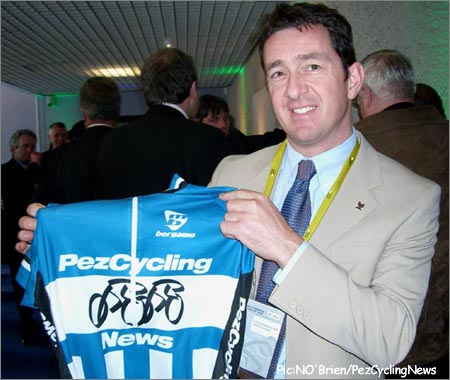 Former yellow jersey holder Chris Boardman finally gets to hold the jersey he’s really had his eye on all this time.

The announcement confirmed that the race’s 8km prologue and 200km stage 1 will pass some of London’s most iconic landmarks designed to attract an estimated 5 million roadside spectators during its stay. 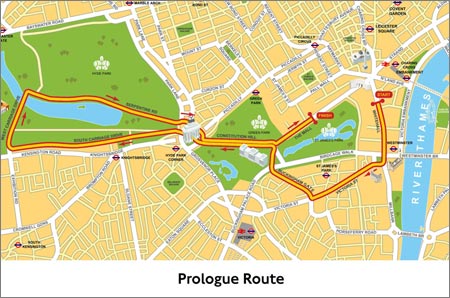 The Prologue (July 7th) is based around 3 of London’s Royal Parks – Hyde, St. James & Green Parks will serve as the backdrop for the 8km course which will finish spectacularly just in front of Buckingham Palace along “the Mall”. The course will be very fast with wide sweeping corners and the only slight drags being Buckingham Gate & Constitution Hill – both only about 400 metres long so definitely a “Big Gear” day.

As I’ve predicted before this prologue is perfect for GB’s David Millar – who even got a gaelic vote of confidence from Christian Prudhomme, who confirmed that Millar would be welcome at the Tour following the completion of his ban having “done his time” or whatever the French expression is (I was listening through translation headphones) – talking of which it was 20 mins into Jean Marie Leblanc’s English-spoken presentation before I actually realized we weren’t in for some kind of French Cultural Revolution with his constant references to the ‘Art of cycling, the ‘Art of London, the ‘Art of the people’ – but in fact he was referring to the “Heart” of these things!

Still what’s a bit of a language barrier amongst friends? The prologue is going to look fantastic flying through the streets of London and will deliver a worthy yellow jersey at the end of the day…

Stage 1 – July 8th
The next day’s first stage again uses some stunning sights as backdrops. Starting at Admiralty Arch on Trafalgar Square it will pass the Houses of Parliament, Big Ben and run alongside the Thames in the neutral zone, passing the Tower of London to the start proper at Tower Bridge (apart from anything else it’s going to be a headline writers dream with so many Historic monuments to pass – you are going to witness more British cliches than in a James Bond film). 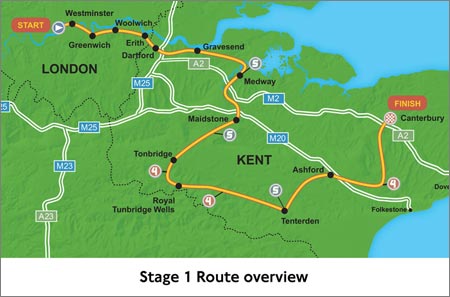 The route will head out of London through Greenwich towards Kents Medway towns before winding its way around the “Garden of England” through Royal Tunbridge Wells, Tenterden and Ashford before a potentially nail biting finish in the Cathedral town of Canterbury after just over 200km. The profile gets fairly lumpy around halfway with three 4th cat climbs, the longest of which is just before Tenterden which also hosts a hotspot sprint that should be a great location for fans. Again the crowds are expected to be huge and interestingly enough the last time the Tour visited Britain in 1994, the crowds for the Brighton stage were the largest of any stage that year. So book early, and get ready for what promises to be a spectacular couple of days. 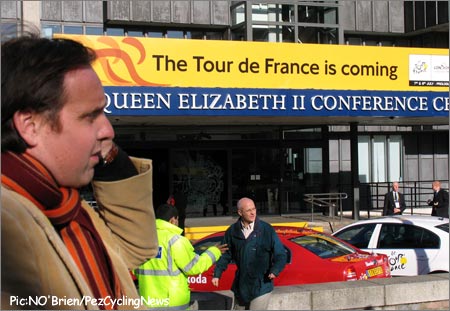 Its definately happening…Pez’s Nick O’Brien confirms the Tour is on its way! 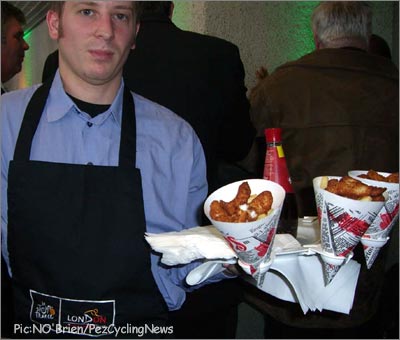 ”Oui Mr. Livingstone – just sign on the dotted line and we will turn up with 200 cyclists for you next year – merci”