One of my more chauvinistic friends recently described a leading Hollywood actress as being “flat and uninteresting”. Some said the same about the race profile for stage 11, but you always know that there’s fire and turmoil brewing below the surface. The fierce mistral winds blow French hope Moreau out of contention, while a new winner blew into town.

We’ll come to that contender in a moment. First, and rightly, it’s time to pay tribute to Robbie Hunter and Barloworld for a brilliantly worked stage win. The South African profited from some super aggressive riding by his boys to haul in a second stage for the team in just three days. 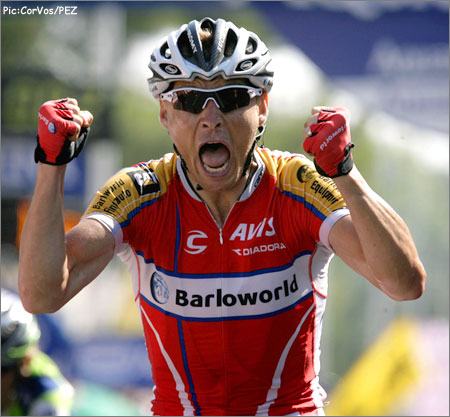 With most of the other sprinters blown out on what looked like an easy day, Hunter avoided a finishing straight pile-up to blast past Fischer and Pozzato – he had enough to hold off a charging Cancellara, too – to claim the win. Hunter has been ultra-consistent with his placings and now sits right in contention for the green jersey. 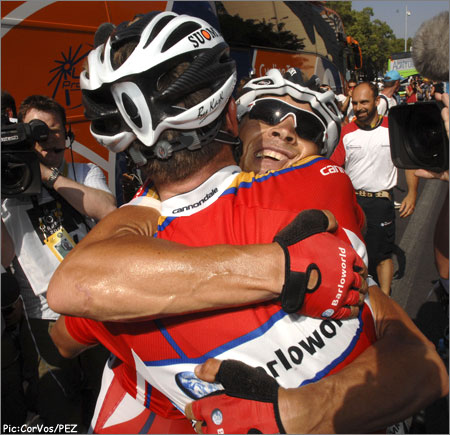 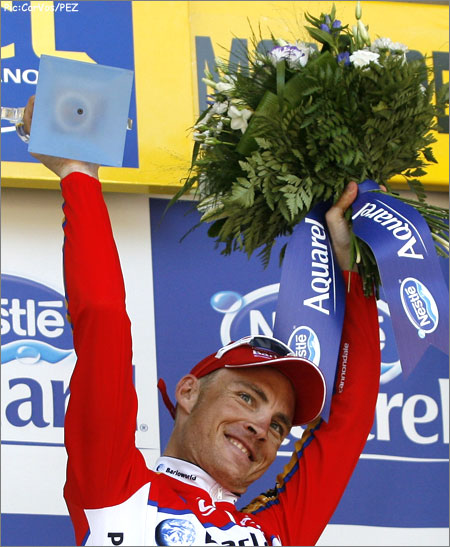 It’s the first time a South African has ever won a TdF stage – pretty good coming about eight years after he exploded onto the scene with a couple of sprint wins in the Vuelta. 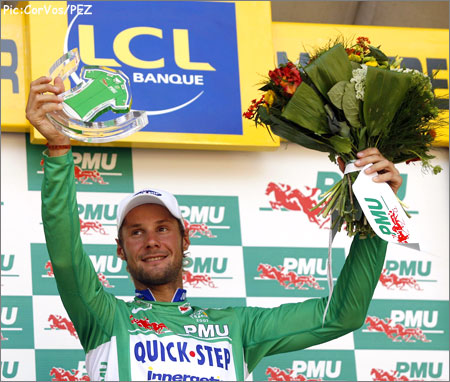 Tom Boonen had a chance to put the Green Jersey fight away today, as he made the lead group and Zabel did not. Unfortunately, Boonen tumbled in the finale, and Hunter won – so now he just has a new foe – only 11 points back.

The stage average speed was a blistering 48 kilometres per hour, thanks to the terrain, the weather and the tactics employed by a couple of key teams.

All of today’s mayhem stemmed from a seemingly insignificant crash by Christophe Moreau. He got back on his bike and kept riding but had just dropped back to the doctor’s car when Astana hit the accelerator. 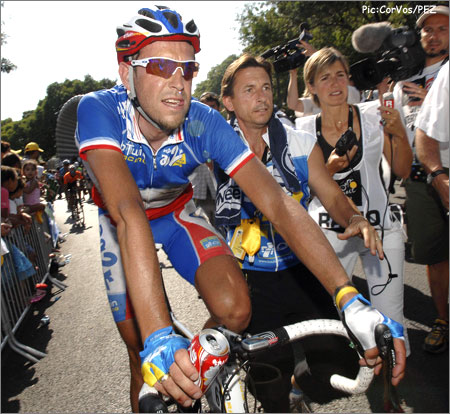 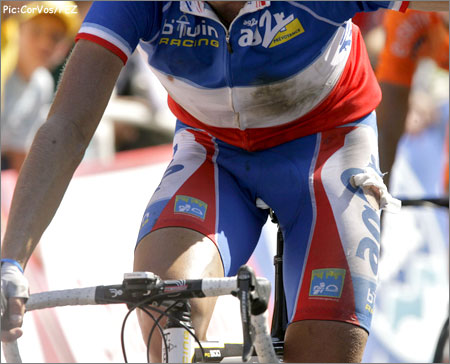 Within seconds the field was shredded. Vinokourov may have sore knees but he can still ride … hard and fast. The sky blue train peeled off into the distance, travelling so quickly that they hauled back a six-minute plus lead to five breakaways in a little over 30kms – absolutely brutal stuff. 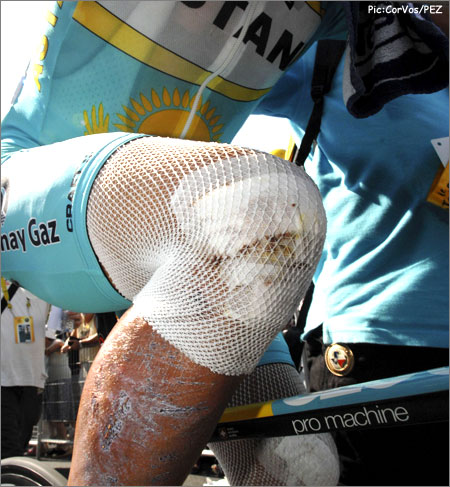 The wind didn’t seem too strong, but the riders were in echelons up and down the road.

Moreau was in big-time trouble and his Ag2r boys wrecked themselves chasing. The Astana-led mini peloton held a lead of between 1 and 2 minutes, but eventually Ag2r ran out of time, kilometres and horsepower and Moreau was screwed. 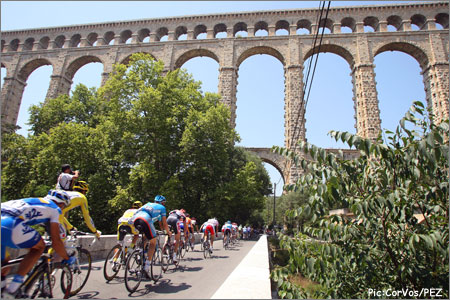 Vino’ eventually gave the signal to slow down, because he felt Astana weren’t getting the co-operation they deserved. It could have been a chance for Ag2r to get back, but they were finished off by the work of Barloworld and QuickStep.

Those two hammered on the front knowing that Zabel and Hushovd had missed out and were stuck in the chase group. 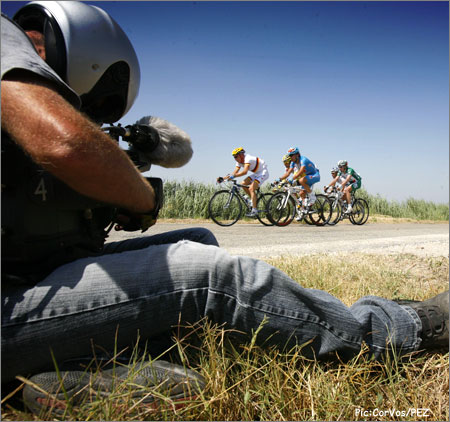 There was a strong break midway through the stage today, but the windy festivities and absolute mayhem behind, put paid to any chances the break had of success. 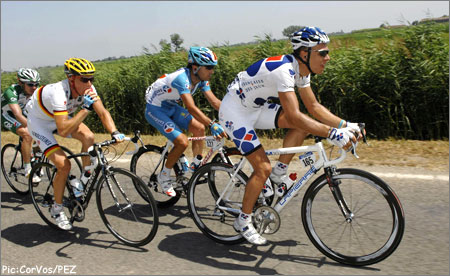 Moreau hit the front of the chase a few times to try and drive up the speed but you could see his morale ebbing away with his yellow jersey hopes. 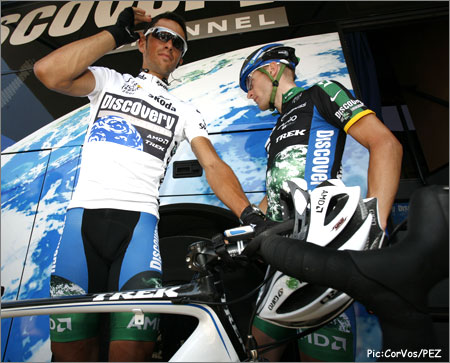 The two Disco GC hopes, Levi and Contador, both stayed safe in the lead group today.

Vino’ had a quick dig off the front, so maybe … just maybe … there could be final week fireworks from the Kazakh in the Pyrenees.

Liquigas and Discovery Channel were also prominent at the head of the field as they barrelled into Montpelier. On a tight bend in the final kilometre, riders came down delaying Boonen. 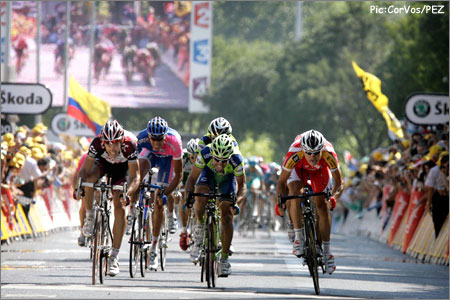 Hunter took his chance brilliantly launching for the line, and hanging on as Fabian Cancellara went looking for another win.

Lampre may want to consider how they placed fifth, sixth and seventh in the sprint – surely it’s better to have one guy first and the rest nowhere? 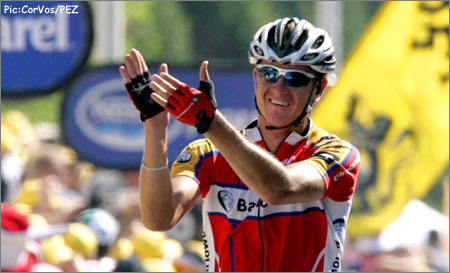 A brilliant day for Hunter and Barloworld. A disaster for Ag2r – Moreau losing time, Gerrans falling, Calzati abandoning and everyone in the team now thoroughly knackered. Moreau has tumbled to 15th overall, nearly seven minutes behind, but all the other favourites survived the carnage.

We’ll have all the latest reaction to today’s chaos, and hopefully as much in the way of thrills and spills on tomorrow’s stage. Don’t touch that dial … keep it Pez!