Well, Sort Of… The French had something to celebrate today, with Sandy Casar spending most of 211km in the break and coming home to Angouleme taking a tricky victory in fine fashion, though he met the pavement in an unplanned high speed dismount earlier in the day. Battered and bloody, he still has the ‘jus’ to get it done at the finish line. But how? Read on!

Today’s 211km test to Angouleme was a relatively flat affair, perfect for a break to go away, seeing as the bigger engines would be at an idle in preparation for tomorrow’s tell-all Time Trial. 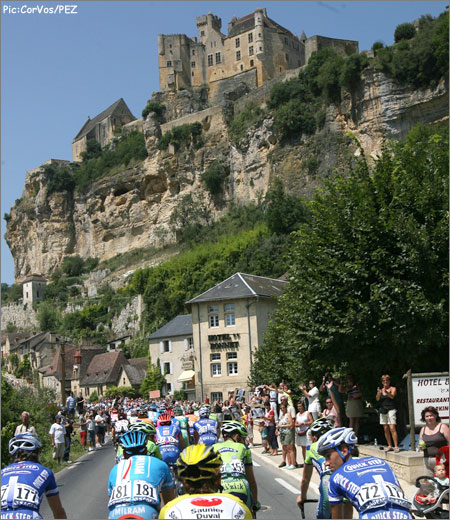 After the first few attempted breaks, one settled into a nice rhythm 16km into the race including four riders: Laurent Lefиvre (Bouygues Telecom), Axel Merckx (T-Mobile), Michael Boogerd (Rabobank) and Sandy Casar (Franзaise Des Jeux). Prior to the break being established, as it was coalescing, Merckx’s place was originally taken up by Liquigas’ Frederick Willems, but in this “Tour of the Dogs” (in oh, so many meanings) yet another Labrador – this time a chocolaty looking one – came running across the course.

Sadly, Casar nailed it with his front tire right in the dog’s right shoulder, sending him ass over teakettle and into Willems, who also ate a little pavement. The dog scurried away being pursued by it’s empty headed owner, Casar got up and quickly jogged back to his steed, Willems took a bit to get up, and he went back to the peloton. In the hullabaloo, Axel Merckx made the junction to keep the escape a quartet, and on they went to an 18 minute advantage. Casar would enjoy the rest of his day with a gaping hole in the right cheek of his shorts displaying a nasty strawberry. 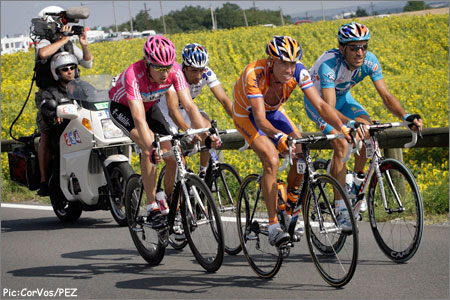 And so with the break acceptable to the peloton, Discovery went to the front and set the cruise control to 25mph. This would be their workload to carry, as the peloton enjoyed the escort of the black, blue, and green team with their leader in yellow in tow.

With 30k to go , the Euskaltel boys woke up late for work, and took over for the Disco boys who had been beating the drum for an awful long time. The Orange team realized two of their riders GC placings were threatened by Boogerd up front, and put their guys on the business end of the arrow.

At 25 k to go, Boogerd had a bike problem and had to switch bikes, and his break mates waited for him to get it sorted out. Perhaps a sign that the break had discussed it and, given Rabo’s less-than-spectacular last few days, perhaps were going to give him every chance to have a go at the win. It would seem sporting, no? 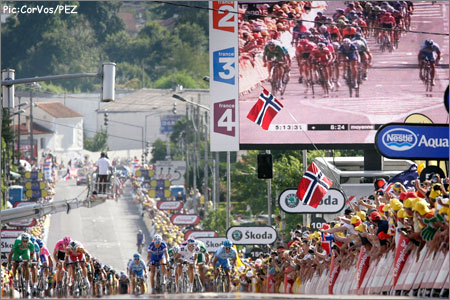 8k To Go
With the break destined for success, it became a race of four. Boogerd had a dig, but was quickly neutralized by the attentive riding of his break mates. It could be a throwback to the Armstrong era: no gifts. The finish was an uphill little brute, so it would take some tactics to get it right. Lefevre had a dig at 6k, and Boogerd, whose teeth are as big as his heart, went to chase it down. Axel helped him out a bit. Boogerd again to the front and nailed it back just barely. Casar sat in, and by his face you would think he was not comfortable.

Lefevre was caught, and with 10 minutes in hand, the break began to dance around a bit. Being on the front became a game of hot potato, and as if they hadn’t seen enough of each other for 200 k, they were taking long looks at one another.

Boogerd went again, but Lefevre marked him out of it immediately. Merckx went as the counter, but Lefevre again closed it. Merckx feigned sitting up, then had another dig, but the Bouygues Telecom man closed it again. Casar, the wounded bleeding man jumped on the other side of a traffic island in a sneaky little move and quickly got a healthy gap. Boogerd went to chase, and gapped the other two. Casar was now committed with his few seconds, and put his head down to motor away.

With one k to go and it was Boogerd closing the gap at 500, and the quartet came together again. It was a game of shifty-eyed glances in the order of , Casar, Boogerd, Lefevre, and Merckx, who looked poor with his mouth hanging open. Casar snuck a 2 or 3 meter gap off the front, and Boogerd let it dangle and checked his shoulder, which was his undoing. 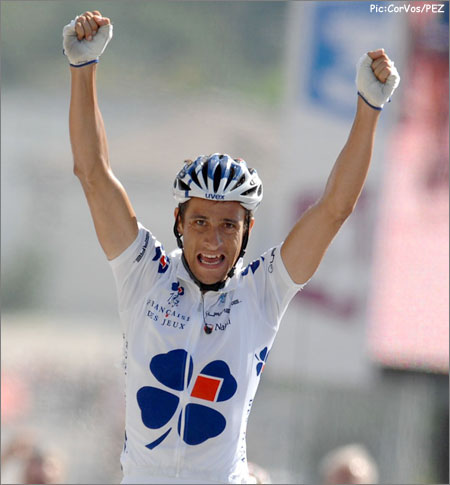 Casar and Boogerd kicked at the same time, but Casar’s kick made more separation and with 100m to go and the finish uphill, he was not going to be caught. Casar won his first stage win in his 6th Tour, with Merckx pulling 2nd, Lefevre 3rd, and poor old Michael Boogerd took 4th.

Behind, Boonen got the best of the rest, namely Robbie Hunter, and putting the final touches on locking up the points needed to keep the green jersey.

So it’s on to the final sword crossing, tomorrow’s individual time trial. It will be a cracker and a half, no doubt about it. Be sure to get the action downloaded right here at PEZ!

Magnus Maximus: A Piece Of My Mind