Once again, the Tour de France delivered magic and mayhem in bucket loads. The fans in cycling-mad Gent got a big home win as two dark blue QuickStep jerseys flashed across the line clear of everyone else. The Flemish press will have a field day, though, as the winner was not who we might have expected.

The volume of noise created by the Flemish fans was overwhelming as the riders barreled into the final kilometre. QuickStep had been plowing through for Tom Boonen, pulling back the long-term breakaway with just 3kms to go.

As Tosatto, Rosseler and De Jongh did a huge job, Gert Steegmans led Boonen out … and won! Boonen came up a tyre’s width short on the day, but celebrated Steegman’s win as if it was his own. 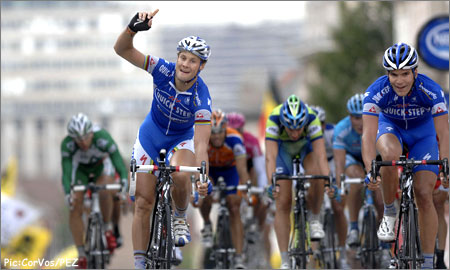 The pressure might not totally be off Boonen’s shoulders after today, but QuickStep have a valuable win on their own turf. We’ll need to wait for the post-race fall-out to settle before we find out if it was planned for Steegmans but the man himself was pretty modest when he spoke to Eurosport on the finish line. 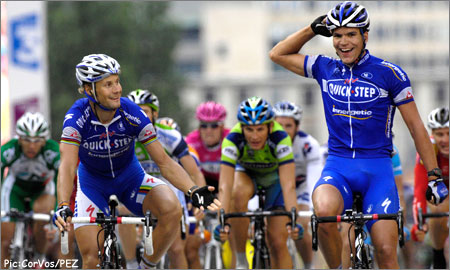 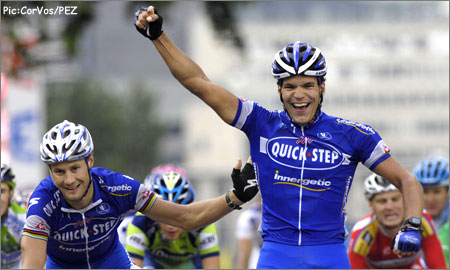 “I can’t believe it. There were so many people along the roadside, that it was even dangerous for us. We discussed the lead out this morning. Steven (De Jongh) was to do the lead out, then me. I was just doing the lead out … I saw a wheel behind me. I hoped it was Tom and then nobody came.” 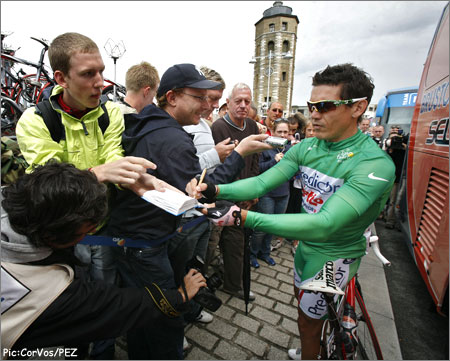 Robbie McEwen was ok to start the stage, but couldn’t quite manage the sprint of yesterday. His 6th place on the day wasn’t enough to hold off… 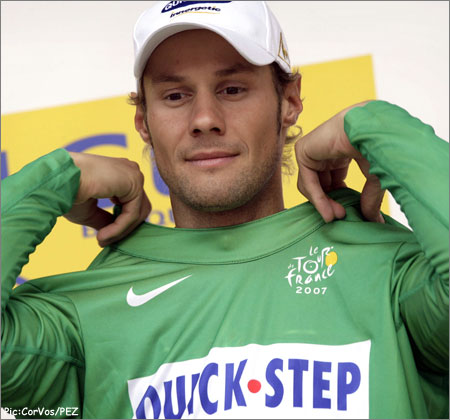 …Tom Boonen. Boonen’s 3rd and 2nd were enough to get him in the Green Jersey in his homeland.

After crossing the Channel last night, the riders were thankful of a humane start time and a short stage of just a clip over 100 miles. The weather wasn’t quite as good as in London, thunder, lightning and rain before it cleared later … but if you’ve raced Gent-Wevelgem in this part of the world, you’re used to it!

Even towards the finish, while the sun shone at the line, not far out the riders were braving heavy rain. 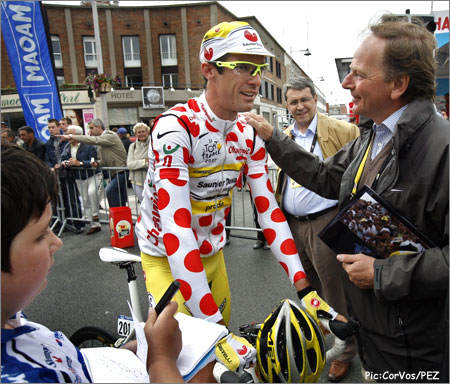 David Millar had an easy time in Dots today – there were no KOM points available.

The three blind mice who spent the day trying to outrun the farmer’s wife (in the guise of the Tour peloton) were the instigator Marcel Sieberg from Milram, aided and abetted by Cedric Herve from Ag2r, and Ruben Perez from Euskaltel.

Sieberg jumped away after 18kms, with Herve and Perez getting up to him shortly after. CSC fancied a bit of a rest so they allowed the lead to grow. Things were pretty swift early on – thanks to the breakaway trio, the average speed was over 45kms/h. 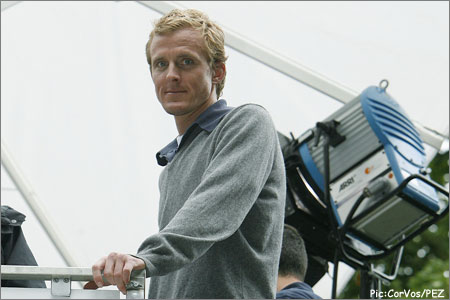 It was beyond any reasonable expectation that they would survive to the finish, but they kept fighting. The weather gave them a helping hand as a three-man break can navigate the road furniture on Belgian roads much more nimbly than a peloton on a slick surface.

Sieberg increased pace as the lead fell to just 13 seconds under the 5kms to go banner. Perez responded, but Herve and Sieberg started arguing with each other. That, of course, spelt the end of the break and they were caught at the 3kms to go. 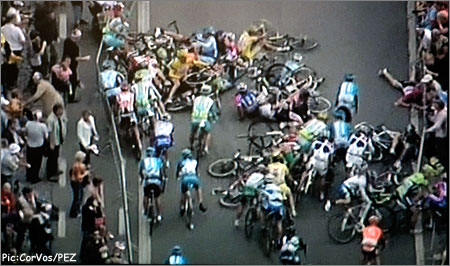 The scene everyone watching their TVs and computers saw…frightening.

No sooner was the break swept up than we had the now obligatory late pile-up – Cancellara and a whole bunch of guys came crashing down in a massive tumble… up front, the race continued with all the main sprinters in the mix. (We had an earlier crash that saw Schleck down – he regained contact, but not sure if he is still 100% fit or not.)

QuickStep were piling up front for Boonen. Zabel was hovering, with McEwen a little boxed in. Steegmans led out Boonen – the racket from the home fans was phenomenal. The roar as ‘Boonen’ took the win was something to behold – matching the enthusiasm of the British crowds over the weekend. 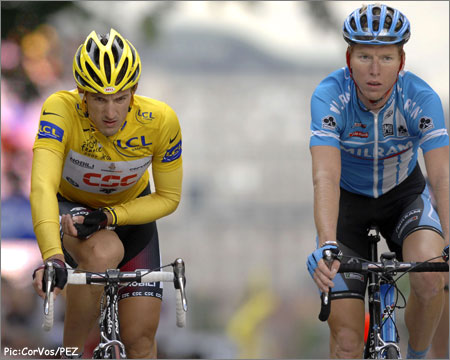 Maillot Jaune Cancellara rolls across the line with the day’s chief animator Marcel Sieberg. Cancellara looks less than pleased, but he looked ok on the podium later.

Sadly, Freddy Rodriguez looked to have popped his collar-bone in the fall. O’Grady, Napolitano and a host of others fell in the crash. Cancellara looked as if he had hurt his wrist, but he made it to the podium with a smile. 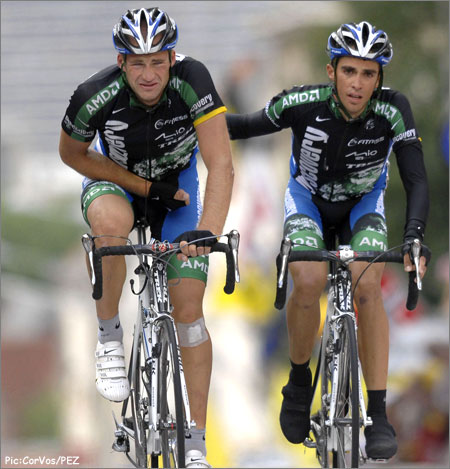 Big Tomas Vaitkus is helped across the line looking pretty beat up.

Other big names to survive intact were Vinokourov and Millar who trundled home in their own time.

Rider Comments
One of PEZ’s Four Young Guns Francisco Ventoso, said: ”I just couldnґt avoid the crash. I tried to brake, but there was nowhere I could ride ahead. And even if Iґd managed to stay on my bike, I wouldґve been caught by those coming behind. I was feeling good and confident, well-placed, but this is what you expect of this kind of finales. I fell on my bike, and I think most of my injuries came from hitting it. Iґve injured my knee and my elbow, and my hand hurts badly, I canґt rest it on a table. But Iґm really worried about my hip. I hope itґs nothing serious, but I can tell Iґm having a hard time walking.”

It’s a longer day out tomorrow, over 236km from Waregem to Compiegne, home of the Paris-Roubaix finish. As always, with comments from our crack team of reporters and some expert comments from the one and only Chris Carmichael, you’d be a fool to look elsewhere. Keep it PEZ!