No one expected a Tour like this. And even in my usual post-Tour funk, the exhaustion of trying to keep pace with the daily barrage of great racing highs, and dope-induced lows, I’m more exhausted than ever. From all that’s happened since London, three things stand out most for me…

The exhaustion at the end of a grand tour is normal for riders, teams, and fans alike – but even more so at the end of the Tour de France. Now kick it up a notch for the highs, lows, dramas and shenanigans that defined this most unique three weeks… The racing was some of the best I’ve seen – ever – but the unexpected events – a new winner, disgraced teams, a disgraced yellow jersey, and a team sponsor who showed their true colors – where do we go from here? 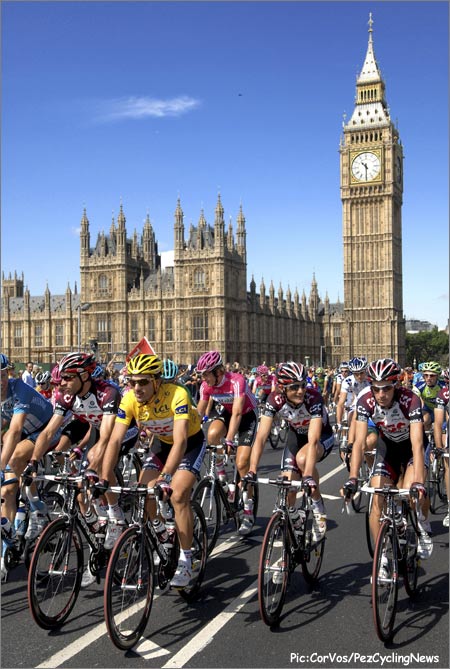 Rolling out of London with high hopes for exciting racing from clean riders.

Like the saying goes: It was the best of times, it was the worst of times… the excitement of the grand depart in London, a first week of racing far more exciting than we’d expect from flat days across northern France, unexpected brilliance in the Alps from new faces like Gerdemann and Soler, too good to be true TT rides by some of the race leaders, the 3 days battle royale in the Pyrenees (I should have known that seeing the top 4 on gc fighting out the win on a final mountain top finish was too good to be true), then the refreshingly realistic final TT to decide gc and a ride into Paris that the clean peloton should be proud of. 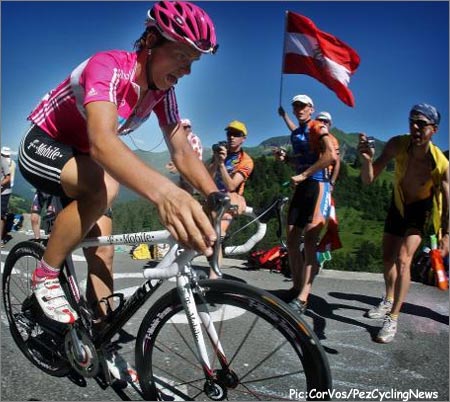 Linus Gerdemann’s solo win to le Grand Bornand should be a glimpse of things to come for the young rider.

Balance the great daily racing with the sad reality that the cheating continues – and still at the highest levels – Vinokourov’s bogus blood, Moreni’s positive test – two disgraced teams, then Rasmussen’s lying about his whereabouts in training.

No one expected a Tour like this. But out of the bad will come good, and the sport will become stronger as the testing continues and more cheats are exposed – I truly believe the testing and cleanliness of cycling will become the gold standard by which all other pro sports are measured. The future, however far off, will be a bright one.

My Defining Moments
But with so many moments that defined this Tour, here are three that stand out for me… 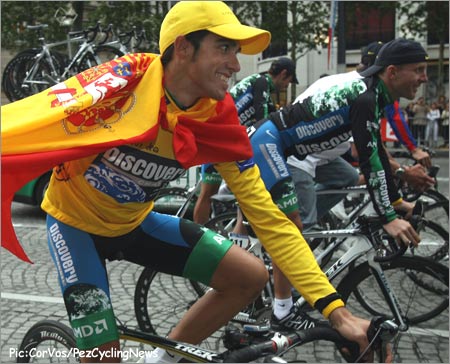 Contador Conquers – The unexpected champion – I liked him as a KOM contender but it’s been a long time since his win at Paris-Nice, and it’s not normal for such a young rider to triumph at Le Tour – especially his first one. But watching his confidence grow with each stage, his smart riding that kept him out of trouble in the first week, staying in contention through the Alps and the crucial Stage 13 TT at Albi – his consistent rise up gc, defiant attacks in the mountains and maintaining his composure under what must have been the biggest pressure day of his life to take 5th and win the race in yesterday’s TT – are all marks of a true champion. And he’s the deserving winner of the race, not just because the timing clock says so, but because he rode with style, panache, and a desire to be better than the rest that we simply didn’t see in the others. A race like the Tour should not be won on the basis of following the moves and hangin on wheels, and as much as Cadel and Levi make most worthy podium-mates, Alberto is standing in the correct step.

Finally, I’m impressed and relieved that Alberto has offered up his dna as proof he’s not part of Puerto. It’s unfortunate that one must ‘prove’ his innocence, but in these times, it’s the best way for Alberto to rid himself of the shady spectre of his past teams.

I hope we see more of him in the years to come. 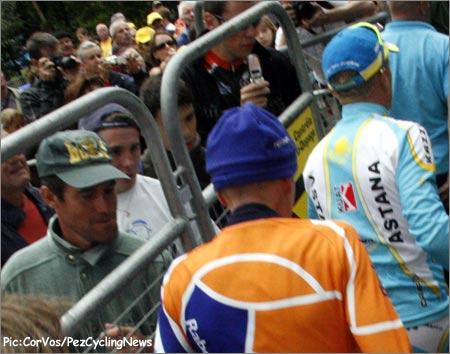 Vinokourov – The expulsion of Vino was for me the low point of this race – and the biggest kick in the gut. Sure I was stunned by the Moreni and Rasmussen affairs, but by then I was already stunned by Vino. For years I (like many of you) admired his super aggressive racing style – he was never afraid to attack (even in the Lance era), he won with style (from Ardennes Classics, to the Champs Elysees, to turning a death defying descent into a 2006 Vuelta win), he had the power to climb and win time trials.

But now, what do these part performances mean… anything, nothing? My trust in Vino is gone, and given his history with disgraced elements of the old T-Mobile, Liberty Seguros, a dodgy missed dope check at the 2005 Tour (“oh, he’s on the bus and it’s already left”)… They all add up to one profound: ‘Yeah, right’.

I’m even more astounded at the arrogance of riders who cheat and then actually win races – how do these guys look themselves in the mirror? How satisfying is it, … really? Maybe it’s better thinking you’ve beaten a bunch of other cheats… I don’t know. It’s more clear now than ever that the clean riders need to stand up for themselves like Maggy Backstedy stated (shouted) with his recent posting here. Assuming there were clean riders on the Astana and Cofidis tour teams – how do those guys feel having their Tour totally screwed by one of their own? And what about the impact on the innocent riders’ careers? Maybe now we’ll finally start to see the kind of peer pressure from within the peloton that will really change this situation. 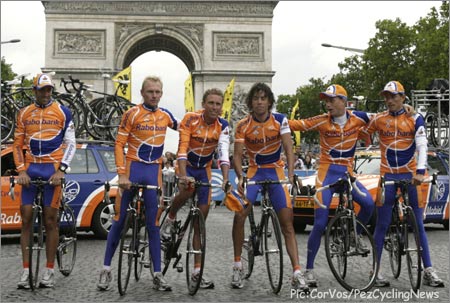 The embattled Rabo Tour squad finished admirably, and can feel proud to ride for such a solid sponsor.

Rabobank: Righteousness Defined
Until now my thoughts of Rabobank have often been followed shortly by a remembrance of that great line from Austin Powers 3 – Michael Caine talking, something like, “The two things that disgust me most are people’s intolerance of other cultures… and the Dutch.” I like the Dutch – the country, it’s people and it’s races… but now I like them even more. The Dutch sponsors Rabobank have set the highest example and gained the respect of riders, fans, and observers alike by booting Michael Rasmussen off the race while he’s wearing the Yellow jersey, and in a position as the likely overall winner. Sponsors who turn a blind eye to their dirty riders are as much to blame for the current dope culture as anything, and here’s a sponsor with everything to gain, and everything to lose – who step up and actually do the right thing. Damn fine work gents – my hat is off to you.

So the biggest race of the year has been again dealt a black eye by the cheats in the sport – but let’s not forget that as cycling works harder than any other sport to clean itself up, we’ll continue to see more of the cheats get caught and kicked out on their asses. Let’s also not forget that the clean guys are there and will survive this war… and we’ll soon be able to enjoy the drama of great racing without wondering if it’s real or fake.

Finally, thanks to everyone for tuning into our coverage and making this our biggest month ever – The valiant PEZ Tour-Crew truly stepped onto the top of the podium – though Nick, Ed, Martin, Bob, Gord, Alastair, Dave, Jered, Matt, Chris and myself never actually saw each other during the entire race, we all stayed together via internet and delivered our set pieces on time and with the style and panache worthy of the maillot jaune. Are we exhausted? You bet – but knowing we could add something different to the reporting of this great race and our sport makes it all worthwhile.