TDF Coach: To Win the Prologue

The mighty PEZ-Crew is proud to welcome Chris Carmichael – coach to a certain Lance Armstrong – to our TDF07 coverage team. His daily reports will bring his very unique perspective on the training and physiological side of the race – how riders prepare for & react to each stage, the toll of three hard weeks of racing takes and more. To get things started, Chris talks about the special challenges of training for, and winning the prologue.

Great performances in prologue time trials don’t just happen, and they aren’t merely the product of gradually-developed racing fitness. They’re unique because they’re such a short and extreme effort. The vast majority of the time a rider spends training and racing in the months leading up to the Tour are spent in the vicinity of lactate threshold, with plenty of time below and a lot of sustained intervals at and slightly above it.

There are really not that many times in a road racer’s season that he has to elicit the VO2 system to the extent he does during a prologue time trial. To perform at his best in this event, a rider has to ride far above his lactate threshold, relying more on his maximum capacity to deliver oxygen to working muscles. And to do that well, riders need to make a small but significant shift in their training in the weeks leading up to the event. 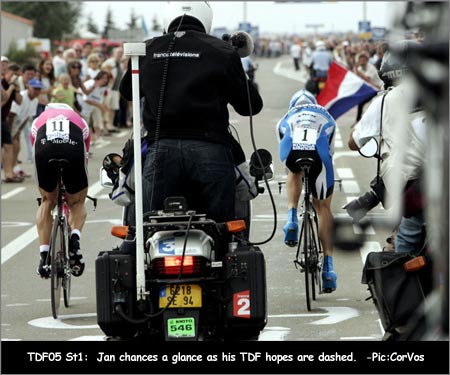 After the Dauphine Libere, or the Tour de Suisse, or whatever final tune-up race a particular rider has chosen, his overall training load drops slightly to allow for more recovery. Much of this reduction comes from cutting back on training hours, but some of the actual workouts get more intense. It was always important for Lance Armstrong to have a very good performance in the prologue, so following his last tune-up race, I’d shift to VO2 workouts.

In order to be effective, he had to perform maximal efforts, but because we didn’t want to generate a lot of fatigue, I kept the intervals very short. A few days after the end of the Dauphine, for example, I’d have Lance start doing a workout like the following 3 times a week for two weeks:

Cadence was one of the key components of this workout. I had Lance ride the efforts slightly undergeared so his cadence would come up even higher than normal. The idea was to let rapid muscle movement drive oxygen consumption. We were going for a VO2 adaptation, not an increase in his threshold power, and riding slightly undergeared also helped ensure that the workout didn’t generate as much muscle fatigue, which led to faster recovery.

Why Bother?
Of course, it’s a valid question to ask why Lance or any other Tour contender really cares that much about an 8-kilometer effort at the beginning of a three-week stage race. First of all, any amount of time you can take out of a rival on day one is time you don’t have to make up later. There’s no good reason to just give those seconds to someone who’s hell-bent on defeating you.

Second, a strong prologue performance is a great psychological smackdown. In Lance’s case, he wanted to achieve both. His goal was to take a good chunk of time out of the Tour contenders who were considered to be the best climbers (Joseba Beloki, Roberto Heras (when he wasn’t on the team), and Ivan Basso). And when it came to the others, Lance just wanted to finish ahead of them so they’d start questioning their form. This was especially effective in dealing with Jan Ullrich; Lance knew that beating him in the prologue would make Jan start doubting his preparation – and of all things, doubt probably had the most debilitating effect on his performance.

Looking to 2007
So, what does all of this mean for the start of the 2007 Tour de France in London? Well, there are plenty of potential Tour winners who have something to prove. None of them have won the Tour de France, and only 3 (Alexander Vinokourov, Andreas Kloden, and Oscar Pereiro) have previously finished on the podium. Vinokorouv looks like he might be the leading contender, but in an environment that doesn’t have hands-down favorite, anyone with yellow jersey ambitions would benefit from the psychological advantage earned through a strong start to the race.

Whether they want to or not, the yellow jersey contenders aren’t likely to win the prologue. That honor will almost certainly go to one of the specialists, or possibly a sprinter. The course is not terribly technical and features wide turns, long straightaways, and a fast finish. This favors guys like World Time Trial Champion Fabian Cancellara and US National Time Trial Champion Dave Zabriskie, who can go tremendously fast when they have enough room to get up to speed and don’t have to dive in and out of sharp corners. And look for great performances from British time-trial specialists David Millar and Bradley Wiggins – they’d like nothing more than to wear the yellow jersey while the race is in Britain. And of course, you can’t count out the top guys from last year’s prologue: Norwegian sprinter Thor Hushovd and runner-up George Hincapie. 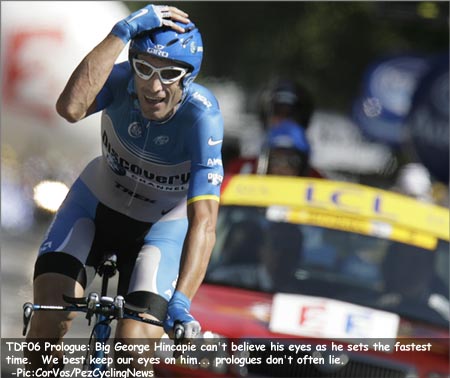 Personally, I think George is really gunning for the prologue this year so he can try to spend another day or two in the yellow jersey. He has a pretty good chance of being in the top three, but unfortunately for him, Cancellara’s time trial form seems to be coming on at the right time, especially considering his recent performances in the Swiss National Championships. And I wouldn’t be surprised if the top five consists of three Americans – Hincapie, Zabriskie, and Levi Leipheimer (Ok, top 10 for Leipheimer).

CTS: Get Nine Plus Three
Lance won 7 Tours because of his dedication and commitment—and because he a great team and superior coaching. Honoring that successful heritage, Carmichael Training Systems is offering a sensational coaching deal: commit to reaching your goals with 9 months of coaching (Select Level and above) and we’ll dedicate 3 months more to you at the end of the term, plus a Lactate Threshold test at one of our regional centers, free.
• Get more info TrainRight.com