The VERSUS Channel held their annual pre-Tour press conference today, hosted by Phil Liggett and Paul Sherwen. It’s a great chance to check in with two guys who’ve seen more Tours than most of us, and are never short of opinions. Once we got through the usual barrage of uninspired doping questions from the mainstream guys, it was time to ask about the race itself…

As part of a phone in conference, you never quite know who’s all in the room, but there’s plenty of crackling phone lines to indicate a fairly large audience. Phil was at home in England, while Paul Sherwen joined while driving his car down an African lane at night, and the rest of us dialed in from all points in North America. Unfortunately, Paul’s phone cut out before I got a chance to ask my questions, but Phil had plenty to say on his own… 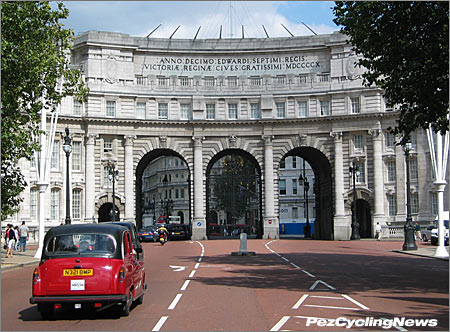 Even the London cabs won’t be as fast as the riders charging down the Mall on London’s Prologue route.

The VERSUS Channel is stepping up to offer its 9th consecutive year of Tour de France coverage in the US, and once again we can rely on Phil, Paul, and Bob Roll to carry us through all 3 weeks. TV coverage is front to back and link to the schedules are at the bottom.

PEZ: What stages will be decisive this year?

Phil: For the first week, I don’t think any will be decisive, until we get to the Alps and that’s when they’ll start to flex their muscles. It will be a tough stage down to Tignes (Stage 8 from Grand Bournand) where we’ve got some nasty climbs including the Cormet de Roseland (19.9 km climb to 6 % – 1 Category) which is a real brute of a climb. And it’s a bonnet, so you sort of spiral to the top. That’s gonna be a tough day out and a big reminder of what’s to come. 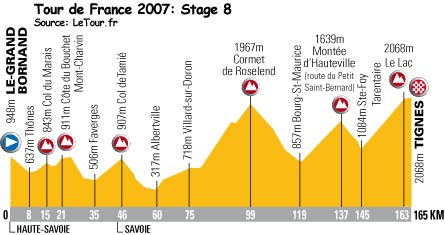 Stage 8 from Le Grand Bornand to Tignes includes the Cormet de Roselend and is the first of 3 mountain top finishes at this year’s Tour.

The day before they’ll have climbed the Col de la Columbiere (16.0 km climb to 6.8 % – 1 Category), in itself a major climb, but it’s got a long descent after it so it may not be too decisive. 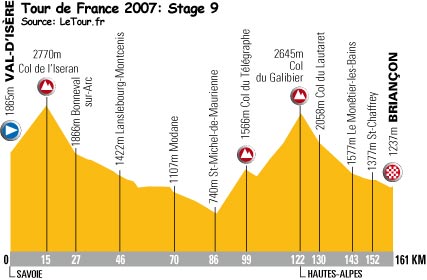 Stage 9’s final day in the Alps will be a gut-buster.

We’ve got two 55km individual time trials – the first one [Albi, St. 13] will give us a reasonable shot of who will be leading the Tour into the Pyrenees.

There’s no doubt this year the Pyrenees will take on a nasty appearance. And I think the race to the top of the Aubisque [St. 16 with four huge climbs] – we haven’t been up there since 1985 if my memory serves, when Stephan Roche won, and we’re coming a different way up this time – that is a brute of a climb, and it is virtually the last climb of the Tour de France. It could be decided that day, but if it’s still close it will go to the usual penultimate day’s time trial at Angouleme [St. 20] 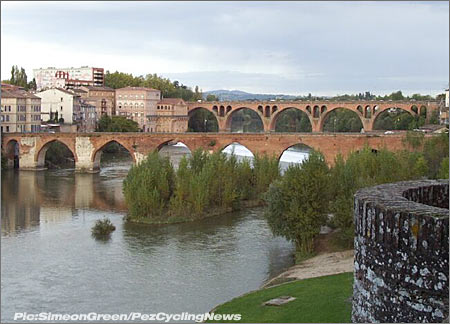 With the first big TT clock ticking, there’ll be little time to enjoy the atmosphere in Albi.

PEZ: If you’re a team directeur looking at those parcours, and you don’t want to sweat out the last TT, is there a stage that could provide the roads for some sneak attacks?

Phil: Well, in the mountain stages, everybody’s on their guard. And you’ll remember a few years ago when that break got away to Colmers when Kivilev got a lead of I think 20 minutes, it took Lance Armstrong nearly the whole Tour to cut it back. He’s the one guy they never should have let into the breakaway because Kivilev, who’s sadly no longer with us – was a potential winner of the Tour. But Lance didn’t really know him, and he eventually finished 4th, but he could have won the Tour that year based on the mistake by Lance.

The final day in the race’s mountains finishes atop the legendary Aubisque.

Who’s Watching Who
This year I think there’s much more chance of riders making a mistake, because some of the teams have got a couple of guys who could be potential winners if they get into the move. So if everybody’s watching for example, Vinokourov, and Andreas Kloden gets into a break he could win the Tour, because he can ride good time trials and he’s not a bad climber. And the same would apply for example to Discovery Channel, they’ve got a super young up and comer in Alberto Contador – and if they all watch Levi Leipheimer, and Contador slips into a move… that guy could become the winner of the Tour de France.

As for which stage that would happen? Well the obvious stage when they’re all on their guard is the mountain stages, they would have to use possibly a transitional stage – maybe Marseille to Montpellier. Or Montpellier to Castres, or somewhere like that. I don’t know whether the Tour’s got the elements to give us that much of a surprise, I think they’ll all be pretty much on their guard.

PEZ: So it’s not so much of a case of the course making the race…

Phil: I don’t really subscribe to the course ever making the race. I was the organizer of the Tour of Britain for 22 years – it was a 15 day race back then, and people would accuse me of making a course to suit the British riders, but I didn’t make any course to suit any riders, because it’s the riders who decide the race – they decide when they’re going to race and at what point they’re going to make the race.

But there’s always the outside chance of a slip move that works, and riders realize too late they’ve let a group go that they shouldn’t have let go. And that changes the course of the race, but it’s always the riders themselves who make the race, never the course. 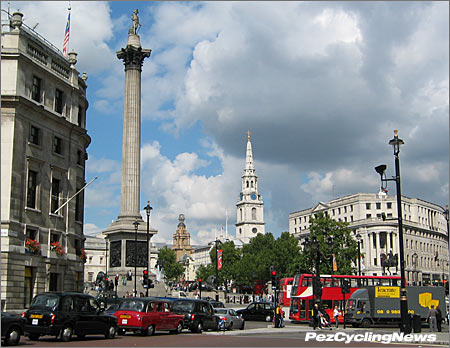 Regardless of the current state of cycling, the feeling in at least one London pub is anticipation worthy of the Tour de France, and the streets outside Trafalgar will be jammed with fans for the historic London Prologue.

And The Pub Says…
PEZ: How excited are people about this Tour, given the turmoil that surrounds the sport right now?

PHIL: It’s difficult to say because this year most of our work on VERSUS has been done from their base in Stanford Conneticut so we actually haven’t been to the races, except for the Dauphine Libere and the Tour of Suisse. And at both of those races the crowds were frankly enormous, but they weren’t ‘our’ crowds if you know what I mean – they were speaking their own languages… Although there was a fair infiltration I have to say, especially at the Tour de Suisse – of American spectators who seemed really up for it.

All I can actually tell you is the feeling in London is absolutely terrific, and we’re not a cycling nation, but the best judge I think is my local pub – because that’s a pub that only watches football and Formula 1 racing, and they’ve had a projector screen put into the pub, so they can watch the full coverage from start to finish on British television.

“And they’re all asking me who’s gonna win because they want to go down to their bookies and place a bet. And they’re telling me names! They’re actually telling me ‘Vinokourov’ – I nearly fell off my bar stool – how’d you know about this guy? I’m really very pleased for the Londoners, they took a big gamble spending all that money to bring it here.” 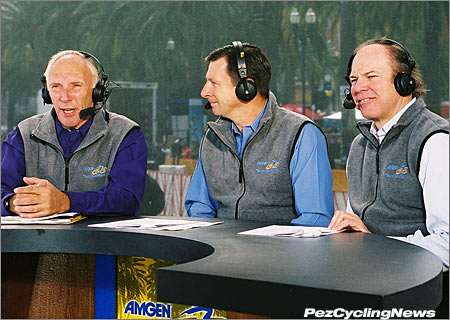 Phil, Paul and Bob will be back, calling the TDF action on VERSUS starting July 7.

It looks to be the most wide open Tour on years – even more so that last year. No previous winners are starting, and team rosters are filled with riders new to the Tour, or who have not yet had a chance to shine. We’ll try to make sense of this ‘new guard’ in our previews over the coming days. But no matter who’s on top in Paris, the Tour is the Tour – and there’s no better way to spend July.