London promised the biggest opening party the Tour had ever seen and judging by the size of the crowds packed into Trafalgar Square on Friday night they might just have been right. The introduction of the riders and teams brought the capital to a stand still and the racing doesn’t even start till tomorrow afternoon. Pez was there to witness it all and here’s a taste of the good old British knees up. 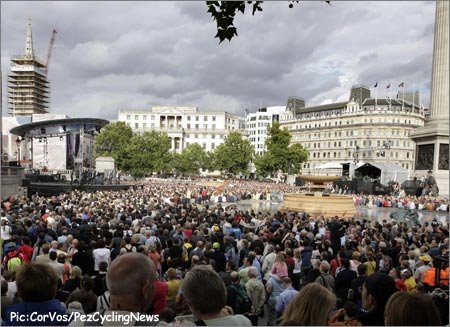 • When was the last time a crowd like this turned out for a Tour Opener – or anything for that matter…? 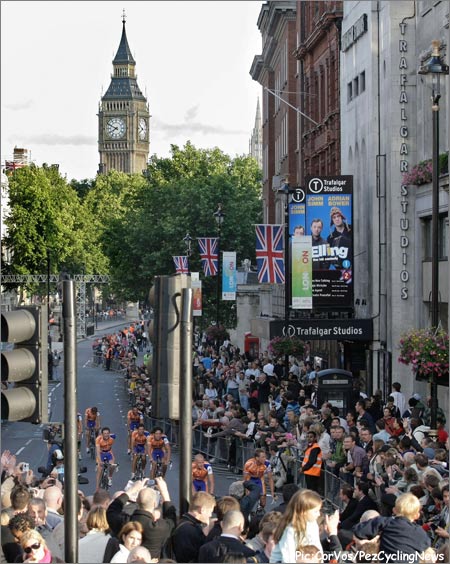 • With Big Ben about to chime in, the Rabo boys took their lap of honour around Trafalgar Square. 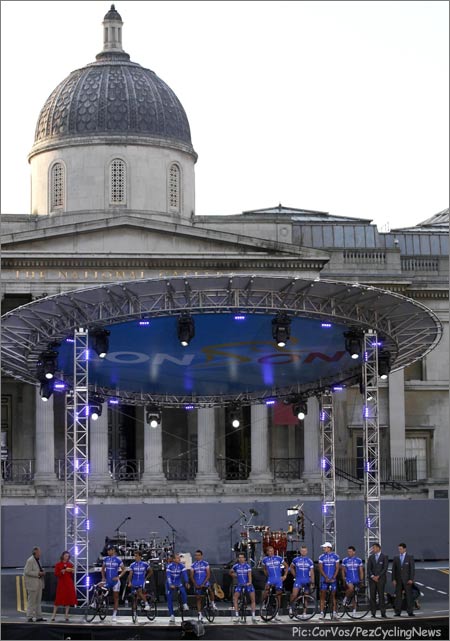 • The Brits do love a ceremony, and pulled out all stops to present one fitting of Le Tour.

• Somehow it just wouldn’t be Britain without a traditional pub, lager louts, kilts and CSC jerseys…

• The teams each rode a lap of the square to the roar of the huge crowd and Herr Zabel got an impromptu Happy Birthday sung to him.

• There’s the French Champion – Christophe Moreau… with all these
riders turning up it really must be true, the Tour is about to start in London.

• Probably the most hyped rider you’ll find in London, Mr.Bradley Wiggins
looked totally in control as he led out the Cofidis team – can he turn the hype into reality? If he does his legend will be assured in the UK.

• The Clouds miraculously cleared after weeks of the torrential stuff – hopefully a good sign for a great Tour ahead. The youngest rider in the race, Welshman Geraint Thomas at 21, found himself the centre of attention – just imagine what it will be like if he makes it to Paris.

• The other Brit that everyone is pinning hopes on is Manxman Mark
Cavendish whose sprinting palmares have got to put him in with a chance
of a stage, but it will have to come early because he’s reported to have said he’s only here for experience and will retire after ten days, I wonder if a stage win would change his mind?

• Enough about the Brits we want some ‘homies’ – stone the crows cor blimey, Mary Poppins it’s George in his glorious jersey, gawd bless you son. 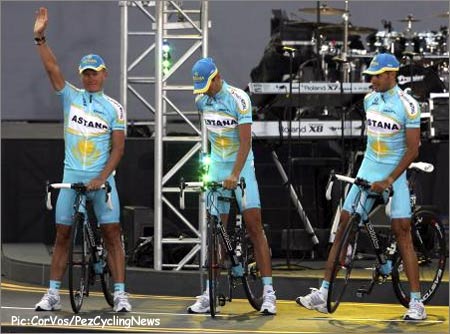 • Vino – the man pegged with the best odds by UniBet.com.

• Add a Belgium who lives in Monaco – Tom Boonen was looking pensive
probably knowing he’s got to deliver the goods soon. Only wins will do
for him. 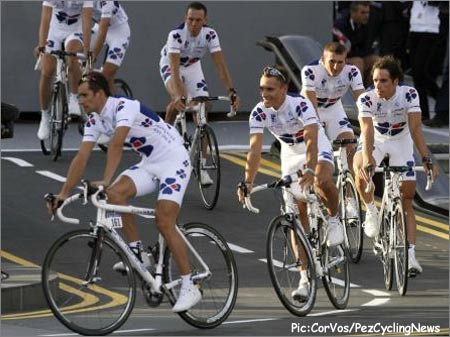 • Teams tested their skills for tomorrow on the twisting ramps leading onto the stage. FDJ had no trouble adjusting to riding on the left side of the road. 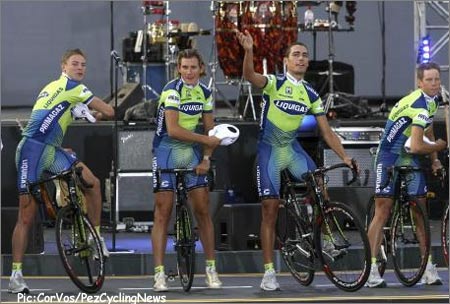 • Each of the teams was introduced on the center stage, and the Liquigas riders won the unofficial hat toss.

• And just for good measure (and because our city is one of the most
cosmopolitan in the world) chuck in a Viking – wait a minute I thought
Bjarne Riis wasn’t coming? Maybe like us he got into the private CSC
party without the bouncers noticing him.

Cheers, here’s to the next three weeks.