It’s not often you get to race the prologue course for a Grand Tour – let alone le Grand Boucle. But that’s just what we did a few days ahead to the race itself. Small problem – the roads were ‘open’, and that London traffic can be a bitch. But neither crazed London cabbies nor bendy buses could keep us from our appointed rounds of the most ‘regal’ prologue course in history. 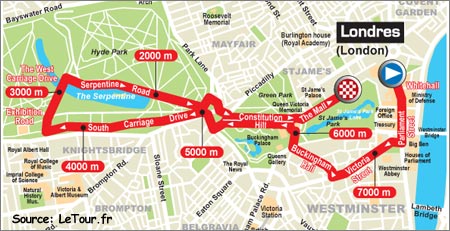 The call comes from PEZ HQ that we need to get some detailed feedback on the Prologue course for this year’s Tour and if possible ride it to really get a feel for the readers – genius idea, if it wasn’t for the fact that the roads won’t be closed until the event day and central London is probably the worst European city outside of Naples for crazed car, bus and taxi drivers. Still YOU dear readers are to be provided for, whatever the cost, and it was with you in mind that I set out on a bright summer morning to achieve my quest.

Before anyone else starts using every typical London cliche (from Mary Poppins to Kinks songs) to report the Grand depart let Pez “take you Buy the Hand and lead you through the streets of London”.

The 7.9km course starts in the shadow of Nelson’s Column, commerating Britain’s victory at Trafalgar over the French – could this be an omen for our riders? The ramp will be at the top of Whitehall but any chance I had of a flying start was shelved as soon as I was stopped in traffic by the Security checks at Downing Street (apparently we’re getting a new Prime Minister). 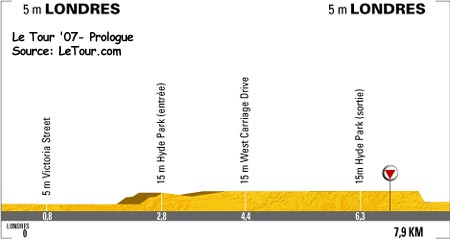 The course continues along Whitehall, slightly downhill and the riders will hit Parliament Square at full tilt, this is going to be Photo Opportunity number 1 on the day, so get ready for loads of images of Big Ben, Westminster Abbey etc. The only opportunity I got was to hop on the kerb opposite Parliament to avoid being flattened by a bendy bus , where immediately a Peace Campaigner started hurling abuse at me – work that one out!

Hang a right round Parliament square and past Westminster Abbey into Victoria street…. nice wide roads with no real technical cornering required so far, the riders will be at full pelt as they head towards Buckingham Palace.

The course continues taking an easy right hander into Victoria Street and it’s full-on down this straight flat road for around 600m which will take the riders under a minute, but took me ages stopping for 2 red lights, 1 U-turning cabbie and a wino pissing in the gutter by the station – oh maybe its because I’m a Londoner that I love London town.

Next we swing right into Buckingham Gate (apparently Mrs. Wiggins – Bradley’s Mum lives round here, and if his recent results mean anything, this could well be the place to party on Saturday night). Victoria street should be a little easier to negotiate by bike on the 7th July, although the right turn off it into Buckingham Gate will be tricky for the riders and not a bad place to hang if you’re after a bit of pedal scraping action.

That’s The Victoria Monument in the background with Goldie on top, always a busy spot for tourists and on Saturday – it’s going to be standing room only – a long sweeping corner and straight across… onto the red tarmac that indicates you’re on Royal Property – yup and any rider caught spitting, snotting or not saluting the reigning monarch will automatically get beheaded – now that’s an idea for the next UCI get together!

The next junction does bring you to Buckingham Palace and Photo opportunity #2, although the chance of snapping Her Majesty will be slim. It’s a great place to watch riders in both directions as the finish is opposite in the Mall. The turn around the Palace is long and sweeping and the riders will find themselves flying up Constitution Hill around 2.5km in, this is a straight drag of no real problem for the riders but for me the fact that I had jumped the light and narrowly avoided hitting a gaggle of tourists was playing on my mind, was I taking things too seriously, should I slow down, I’d get a better report if I eased off…. so,….I jumped the next red light as well, and found myself elbows out down the outside line of solid traffic into Hyde Park corner.

The riders will have the privilege of closed roads across Hyde Park Corner which means the course goes straight over the roundabout and not round it towards Knightsbridge as normal traffic does – I couldn’t resist it, and flew straight across under the arch and round towards the entrance to the park, gaining myself valuable seconds obviously, but incurring the wrath of an old gent who quite rightly pointed out that I was a bit old to be playing on my bike on the Pavement. Wait till the 7th ‘captain then you really will have something to grumble about. Anyway the surface here is pretty gravelly so although a straight line, it could be a place to watch out for an upset.

The riders will enter Hyde Park through these gates, just to the right of the Duke of Wellington’s old house – or ‘No.1 London’ as it is called. This will obviously lend itself to headline writers and TV commentators the world over BUT we’re not going to go down that cliche. The gate is very narrow and the left turn just beyond will have the riders at a crawl so anyone that thinks this course is just a case of keeping the big gears rolling would be mistaken. This will be a great spectator point not least because you’ll see them exit here about 4 minutes later as well as this being one of the sharper turns on the course thus ensuring a bit of breaking action, (and let’s be honest here) a chance to glimpse Michael Rasmussen in full TT glory- the sight we all want to witness!!

The riders will continue down South Carriage Drive probably touching over 30mph – I on the other hand was forced to a halt as the Queen’s Household Cavalry came wondering past – presumably still waiting for their wildcard invite from the Tour organizers.

At the end of South Carriage drive after approx. 4km the riders swing a sharp right at the Albert memorial and head up to the bridge that crosses the serpentine – turning immediately right and dropping down alongside the lake heading for home. This should be a really fast section with a slight downhill and a road surface that is so smooth it’s usually packed with inline skaters who obviously appreciate a silky bit of tarmac as much as a TT specialist.

The course runs right past the “Pedalo” hire hut and I reckon that one of the coolest ways to watch would be from one of these – plus if you really feel inspired you could always try a few laps of the lake at full tempo.

For a far easier way to enjoy the atmosphere grab a deck chair and sit back and relax…in a very British Summertime way.

Back out onto Hyde Park corner the riders won’t have to contend with the traffic but if there is any rain around, these roads become lethal with the amount of diesel that covers the surface – the simple left and left again could be very difficult.

The home run back down Constitution Hill past Green Park & St.James, The crowd noise will be fantastic as the riders swing onto The Mall for the final 400 metres.

And that’s it – all over for me in 17:53, which I reckon is probably around half the speed the big boys will do it in – but hey they won’t have to contend with my urinating friend in Victoria. It’s going to be a right Royal spectacle on the day for all the right reasons with this superb circuit and the expected huge crowds.

Surface wise things are generally pretty good especially by the Palace and the Park, however a few things worth looking out for are:

Plenty of man whole covers conveniently placed out from the curbs in the racing line which alongside painted road markings could cause problems especially if we get rain – remember this is Britain and it is summer, and judging by the last few weeks we’re sticking with tradition.

As a tribute to the Northern Europeans many of the thresholds at junctions have a touch of the ‘pave’ about them – not a major problem but one you’d want to choose your line crossing if you’re a certain Dutchman.

Finally they’ll slow no one down I’m sure but the 3 or 4 traffic calming humps before the Serpentine bridge could be fun on TT bikes with aero bars..

We’ll be filing more reports from London all weekend so stay tuned to PEZ!