Just like that great 80’s Aussie rock band “Angel City” sang in my days of care-free clubbing – “got me thinking ’bout the south of France… pack my suitcase, take a chance, got nothing to lose … take me away to Marseille!”, the big bunch bid adieu to the hard Alpine long weekend and said ‘allo’ to some sunny flat days ahead on the scenic route to the Pyrenees.

On a flat transfer day out the Alps, the biggest obstacle is how us journos will find something interesting to say about the stage… Let’s see: break gets 10 minute led, bunch never chases, break splits on hill and 5 sprint to finish. But fear not dear PEZ-Fans – it was another beautiful day in France with lots to look at… 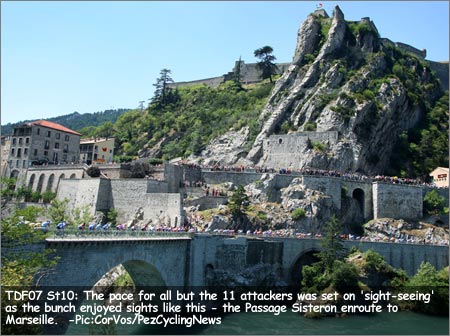 But this is the Tour de France and no stage win is easy – so ‘chapeaus’ all around to QuickStep’s French homie Cedric Vasseur, who scored the win from his final 4 four companions Sandy Casar (FDJ), Michael Albasini (LIQ), Patrice Halgand (CA), Jens Voigt (CSC) in the sunny seaside streets of Marseille.

After an opening couple of hours that saw a variety of attacks pop off the front like water off a hot griddle, but all doomed to the same fate as a Southern France grass-hopper meeting the hood of a speeding Renault (“Yes Alex – what is ‘le splat’”), T-Mobile’s Marcus Burghardt let one go that seemed good enough to draw out enough opportunists to make it stick.

He was joined by the five riders above and Staf SCHEIRLINCKX (COF), Paolo BOSSONI (LAM), Aleksandr KUSCHYNSKI (Liq), Juan Antonio FLECHA (Rab), Andriy GRIVKO (Mil). It wasn’t long before 11 men were building a nice lead that maxxed out at 14 minutes with 102km to go. 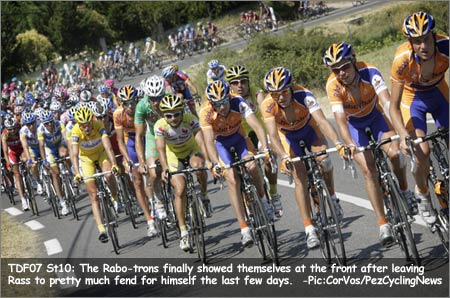 With 32 km to go, Jens Voigt unleashed a ‘Jens Voigt’ on the cote de Bastides, and although he was leashed in soon after, this opened the door for the day’s racing and Frenchman Patrice Halgand bolted – obviously hoping to do his country proud. Voigt jumped again, followed by Vasseur and then Casar and Albasini.

This was the selection and the rest was infighting all the way to the sunny Mediterranean. At least they had the good sense to work enough to keep their lead. It all came down to who had the fastest legs as they duked it out in the 5-up. 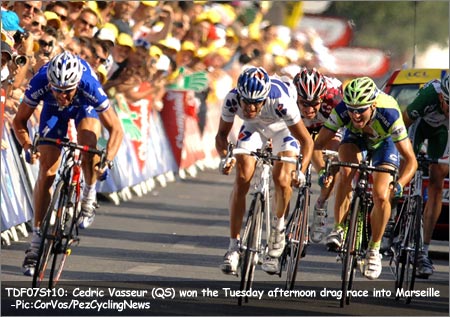 Somehow the peloton managed to get up for a sprint for 12th place, and although over 10 minutes back, it was too close to call on the line with Tom Boonen just edging Francisco Ventoso. So Quickstep won both final sprints today… that should count for an extra glass of wine with dinner tonite. 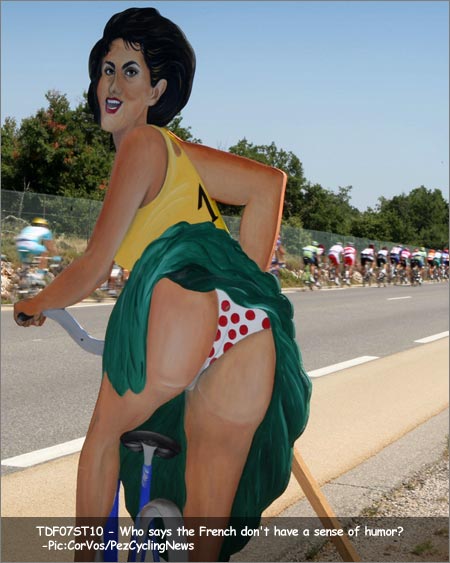 The bunch has got to be happy to be done with the first half of the race, and the fresh seaside air will surely signal a mental change for some. There’s still a couple more flat days to get us across the south of France, and these tend to be scorchers…

Keep it dialed to PEZ for the news you can use from le Tour!