…Vino improves with time. Alexandre Vinokourov has put himself right back in this year’s Tour de France with a stunning time trial on the very wet roads of Albi. His main threats in the next days are going to come from his own team, Klцden and Kashechkin, but also Evans and, surprisingly, Rasmussen, who it appears can now hold his own in a TT! Don’t write off the Dane yet, he’s still in Yellow.

This could be “THE” decisive day of the Tour, the long time trial; 54 kilometers with a 20km drag of a climb from the start in Albi, a tricky fast descent, followed by the slightly steeper 4th cat Cфte de la Bauziй and then it’s a fast 16 kilometers to the finish again in Albi.

The Early Starters
Cofidis’ British star, Bradley Wiggins was the early leader, covering the circuit in one hour, eight minutes and forty-eight seconds at a speed of just less than forty seven kilometers an hour, and has set the time to beat. The World Time Trial Champion, Fabian Cancellara (CSC), will not be adding to his prologue victory as he has finished well down, over six minutes slower than Wiggins, in the wet weather conditions he crashed after the first time check on a sweeping bend and then just went slower and slower. Other top riders who will not be “doing a ride” are Tom Boonen (Quick-Step) who is using today as an extra rest day, also the Saunier Duval rider, David Millar, who was expected to run Top 10, but had to slog through some of the heaviest rain of the day, and was well below the form of his winning time trial in the Tour of Spain last year.

The Stars Start to Shine
We have to wait until after three o’clock to see the top GC men to strut their stuff in terrible conditions, heavy down pours mixed with lashing rain is not the best, remember BIG Jan in the Tour a few years back when he nearly took a roundabout out and then of course the shortest Tour ride in history when Chris Boardman lost it in the prologue in Brittany in a storm, today the weather will affect the result as we still have a week left in this most open of Tours. 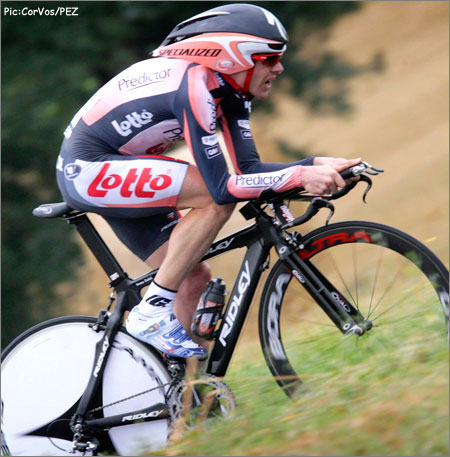 Cadel Evans quietly marched himself into 2nd overall today – and suddenly the talk is no more, it’s real, and Evans has a big shot at a win in Paris.

Looking at the course the roads are narrow, twisting and quite technical in places, on a dry day possibly pleasurable, but today, NOT! Chris Horner (Lotto-Predictor) is first of the top riders to leave the warmth and security of start house, he moves smoothly across the puddle roads, he will be testing the course for his team leader and possible overall leader after today, Cadel Evans, who is off an hour later than his right hand man Horner.

Next we have four ex-Soviet riders, Karpets (Caisse d’Epargne), Popovych (Discovery), Vinokourov (Astana) and Menchov (Rabobank), all good against the clock, but today “Vino” needs to show that he is over his crash injuries if he is going to do anything in this Tour, his problem could come from team mate, and Ed Hood’s tip for the podium, Andreas Klцden as he is another possible for yellow by the end of today’s stage. 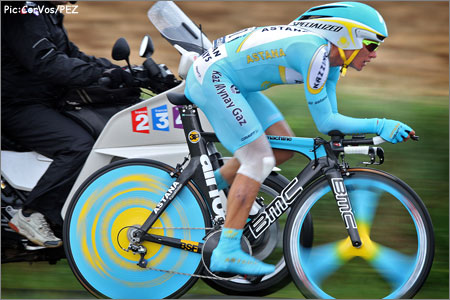 My pick for future stardom, Soler Hernandez (Barloworld) heads off into the gloom wearing the spotty mountains jersey, he won’t do much today I don’t think, but look out for him in the Pyrenees and in the coming days and then proceeding years to come.

All the riders have gone for rear disk wheels, and the gearing is an 11 up straight through cassette and mostly 54 or 53 on the big ring and a 46 inner ring, so they are not too worried about the mid-way climb. 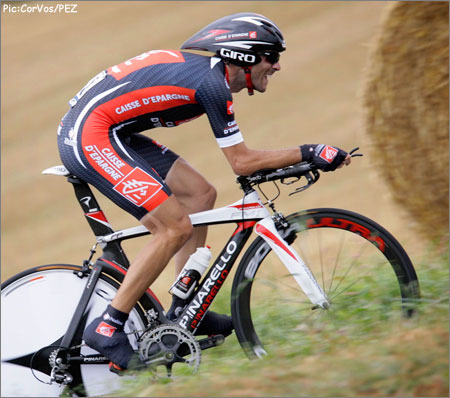 Possible winner of last year’s Tour, Oscar Pereiro (Caisse d’Epargne) nearly crashes in the first two meters as his back tire slips on the white lines in the road, word will be sent back to team leader Valverde as this could be his day for taking over the yellow jersey as he has been working on his time trialling over the winter after the near humiliation from Vinokourov in last year’s Vuelta.

Out on the course Gusev (Discovery) is doing a great time until he tries to take a roundabout too fast and slides on his front and manages to mount the pavement on his stomach, that hurt! The rain looks to have eased although the roads are so greasy that slips and slides are inevitable. He gets up and still does a fair time, but must have lost over half a minute. 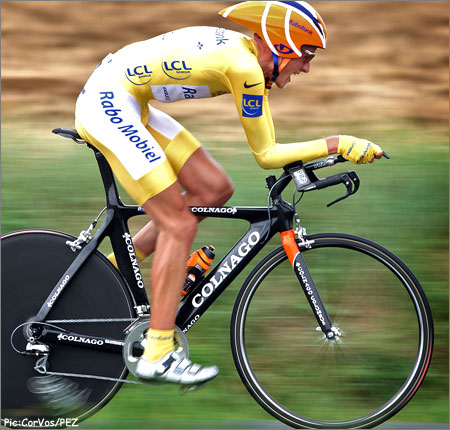 Last man off, Rasmussen looks serious, but must know how hard he has to ride today to save his yellow jersey, he will find out in just over an hour. Vinokourov takes the fastest time from Wiggins at the first time check and again at the top of the Cote de la Bauziй, the man from Kazakhstan is going for it today and absolutely crushing the course. He has a formidable task before him though: eight minutes to Rasmussen and around five minutes on all his main rivals, Valverde, Mayo, Evans, Contador, Sastre and Klцden, then there is always the threat of Leipheimer, a good ride from him today and a solid Pyrenees and he would be a problem in the final time trial next Saturday.

Wiggins has been top of the leader board for a long time, Popovych nearly knocks him off, but we don’t have long to wait until Vinokourov comes in with a blistering time of 1 hour, 6 minutes and 34 seconds, more than 2 minutes faster than Wiggins, Klцden has been 3rd at all the intermediate points, but slips on a tight corner and loses time and his nerve as he takes it very cautiously round all the next curves. 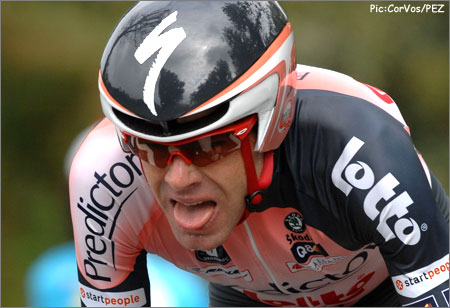 The other aspirants don’t seem to be having a good day in the saddle, all losing time and some also losing skin, the injuries they collect today, they are going to have to carry through the mountains over the next murderous three days. Evans was probably doing the best behind Vinokourov and Klцden as he was consistently 6th fastest through the intermediate time checks and was getting faster towards the end. 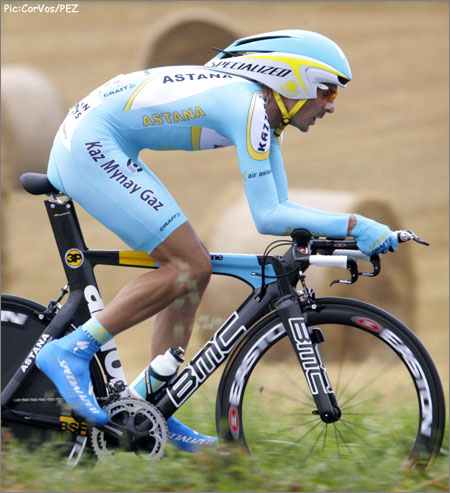 Kloeden was, as per the norm, solid in today’s TT, but his tumble midway through definitely cost him some valuable time.

Valverde, Mayo and Leipheimer were not rolling well against the flying Astana riders and Moreau lost a staggering ten minutes. Not much was seen of the other Astana rider, Kashechkin until he came in with the second fastest time, 1 minute 44 seconds slower than Vinokourov, let’s not forget how he looked to be holding back in support of his leader, we could be looking at an Astana podium in Paris, although I think Evans and Co. will have something to say about that in the coming days. 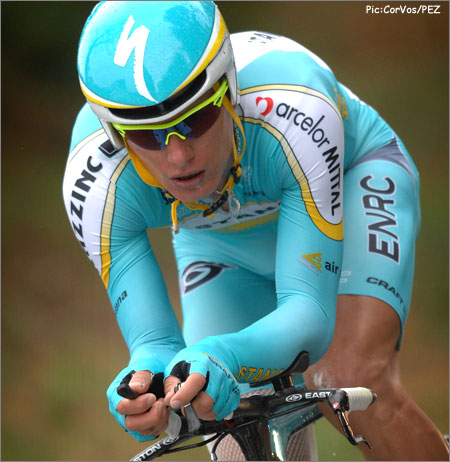 Rasmussen was not faring as badly as everyone thought, in fact he was not losing as much time as Valverde who was having a terrible time, as was Sastre who both came in four minutes slower than Vinokourov, and Mayo? Don’t ask. He could have log-rolled it faster.

Cadel Evans buried himself all the way to the line to get second place, the rain had stopped for the last five kilometers of Rasmussens’ ride and he even caught Valverde for three minutes, so much for Valverde’s time trial training, he wants to ask for his money back on that one! 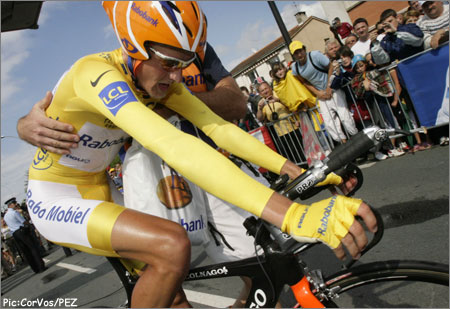 What Next?
Rasmussen has done enough to keep his overall lead by 1 minute from Evans, Contador and Klцden have moved up as has Kashechkin and obviously Vinokourov. The question now is what will the Astana boys do next? Contador, Sastre and Astarloza are in their home ground for the next three days on the steep climbs of the Pyrenees and the Spanish fans will be out in force, the race could come down to the last time trial to Angoulйme next Saturday, but expect a lot of attacks before then! 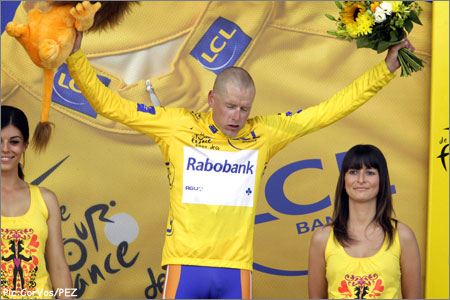 That could possibly be the worst podium picture ever. Poor Rasmo.