Bomb threats, rider protests, explosions on the road, explosions in the legs, a long breakaway by some favorites, 5 categorized climbs and an outstanding performance by the yellow jersey holder. It all happened today in the Pyrenees under the warm Southern French sky. Could this Tour de France get any more dramatic?

With the remaining 151 riders in the Tour de France still seemingly shocked by Vinokourov’s positive test and Team Astana’s subsequent withdrawal from the race, the mood at the start line in Orthez was somewhat subdued this morning. Nine teams that have formed a group called the ‘Mouvement pour un cyclisme crйdible’ stayed on the start line for two minutes in a protest against doping in cycling and to make a statement that their teams were clean. Whether they made their point or not is unclear as the crowd were left confused when Ѕ the field left and Ѕ stayed! More protest action also occurred out on the road, this time by Basque separatists as bomb threats were made and two small explosions set off that fortunately didn’t affect the race at all. 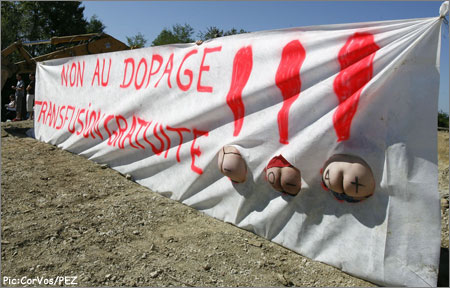 The fans weren’t all too delighted with the news of Vino’s positive.

All the protests were soon forgotten though and the explosions began in the peloton as a break went clear after 10km. The early move contained no surprises as Stepane Augй (Cofidis), Vincente Garcia Acosta (Caisse d’Epargne), Gorka Verdugo (Euskaltel Euskadi) and Saunier Duval-Prodir’s Christope Rinero pressed ahead of the field, but it was the second break of the day that formed on the HC Climb of the Port de Larrau that put the whole field under pressure. The man driving this break was none other than 5th place overall Carlos Sastre (CSC) with the KOM jersey caretaker and hopeful, Mauricio Soler (Barloworld) and Iban Mayo (Saunier Duval) just hanging on his wheel.

This early bid for glory by Sastre put huge pressure on the peloton and Rabobank as they had to chase very hard despite the fact that there was still more than 150km to go. The entire Rabobank team was trying to bring these three back, but to no avail as Sastre continued to open the gap to be 1.5 minutes ahead over what was now only a 20 man peloton at the top of the climb!

Rabobank had the festivities well under control all day.

The lead of the breakaway did soar to a maximum of 7 minutes effectively putting Sastre in the virtual yellow jersey with 85km to go, but some excellent riding by Rabobank and Thomas Dekker in particular brought the break back down significantly to be only 45 seconds at the start of the finishing HC climb of the Col d’Aubisque.

With 9km to go the break was swept up and the real fireworks began as the top four on General Classification, Rasmussen, Contador, Evans and Leipheimer were now the only four left in contention on the climb. Evans was tailed off with 5km to go and battled valiantly the rest of the climb to lose only a little bit of time, but that time may well be crucial, as Levi jumped to within a minute of Evans’ 3rd place on GC. 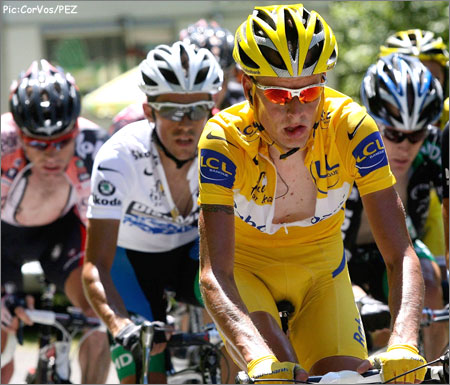 Back to the three-way race for the stage and the overall…Two Discos versus the yellow of Rasmussen. Contador and Leipheimer gamely provided some aggressive riding early on, but none of their attacks amounted to more than 50 meters TOPS over the calm, cool, and under no apparent pressure Rasmussen. Eventually, it seemed that the trio resigned themselves to a quick clip upwards and then a fight for the stage once it became apparent that Rasmo wasn’t going anywhere. 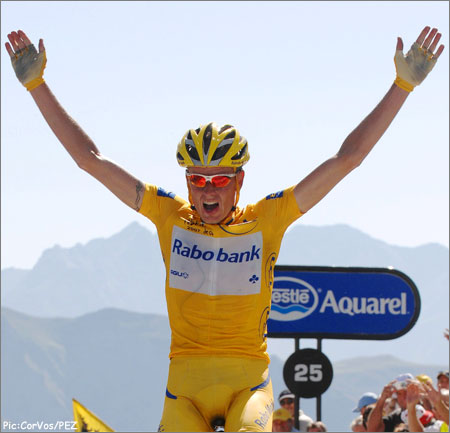 Unfortunately for Discovery, it was Rasmussen who was the strongest…by far. His attack with about a kilometer to go was decisive and a knife to the throat to his two companions. He managed to put almost 30 seconds into Leipheimer in only 1k. It was so convincing so thoroughly above everyone else, that in that one kilometer Rasmussen showed just exactly who the boss at the 2007 Tour de France is.

News Flash: Cristian Moreni (Cofidis) has tested positive for testosterone after a random control on Stage 11 of this year’s Tour. Consequently he has been removed from the race and immediately suspended by his team, with I’m sure many repercussions still to come. Ironically Moreni was one of the riders who protested on the start line this morning against doping…

Carmichael Sez: Racing For A Contract