Italian sprinter, Daniele Bennati has taken a fine maiden Tour win after a breakaway group was finally successful in the ’07 Tour. It was just what the doctor ordered on a day that saw no yellow jersey wearer on the line and the focus of the world media on the race for all of the wrong reasons.

Bennati survived the constant attacking in the closing kilometres as his companions recognised what he proved to them in the end: That he was the strongest finisher from the select group. The Italian not only broke the 2007 Tour stage drought for his Lampre team, but chalked up the squad’s first victory in the French race since Jan Svorada won on the Champs Elysees in 2001. 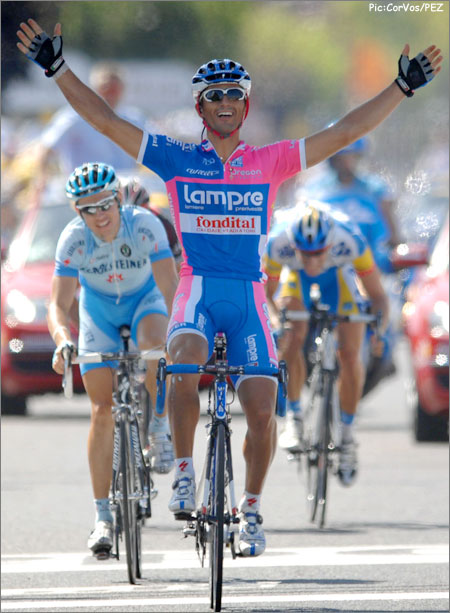 At the start of the stage in Pau this morning, there was a subdued atmosphere amongst many of the riders as the riders of the Cofidis team and also Rabobank’s Michael Rasmussen did not take the start. There was no repeat of the protest from the previous day and the race got off to a flying start, right on time.

While many expected to see Alberto Contador starting in the yellow jersey as the new race leader, the Discovery Channel rider turned up to the start in the white jersey of the Best Young Rider – Race officials deciding that the new race leader would not be proclaimed until the end of the days racing. 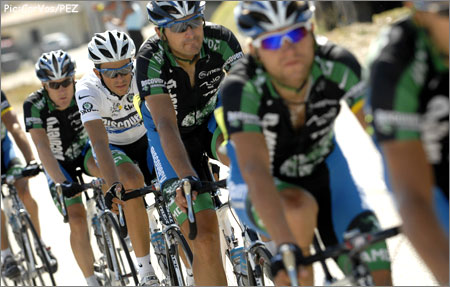 With Tour post-mountain flat stages, traditionally being the domain of the non-GC breakaway riders, it was on in earnest from the first kilometre to see who would be allowed to get away up the road.

Xavier Florencio of Bouygues Telecom was the first to try his hand, right from the drop of the flag and after being joined by Mikael Delage of FDJ and then Andry Grivko of Milram, the three managed to lead the race together for all of 2km. 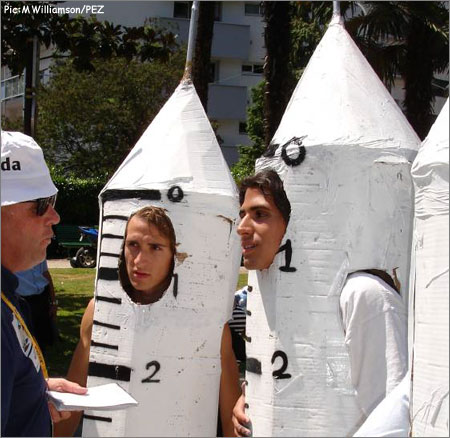 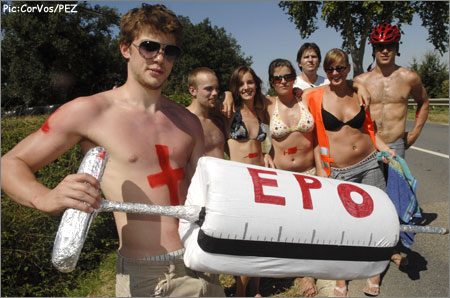 If you take roadside scenery as a gauge of support, there’s a fair bit of criticism coming from the fans these days.

Saunier Duval’s David Millar was the next to try his luck at the 5km mark, going it alone, but with his strength as a time trial specialist, the bunch were not keen to let him take off in pursuit of a stage win.

As soon as the Scot was caught, another group went, with Millar jumping on as well, making it a group of eight that looked like it just might have the right make up to go all the way. 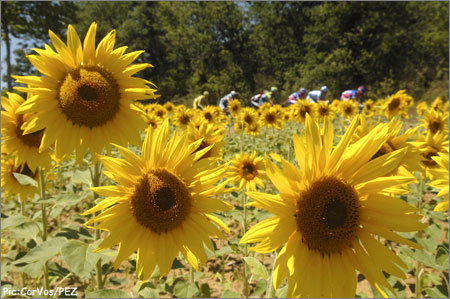 That’s a lot nicer to look at than needle-clad fans.

The eight were kept in close proximity to the bunch as the first of six smaller climbs approached after just 23km.

At first it was Predictor Lotto leading the chase in the hope that Evans might pick up some valuable time bonuses on the third and fourth category climbs of the day, but once the break reached the first sprint of the day with a lead of over 2minutes, Predictor Lotto gave up the chase and Caisse D’Epargne took over.

Rabobank’s Denis Menchov decided to call it a day and climbed into the team car just before the feed zone at 88km, presumably fed up with he fact that he has spent the past two weeks giving up any chance he had himself of personal glory or stage wins, only to have nothing to show for it anyway. 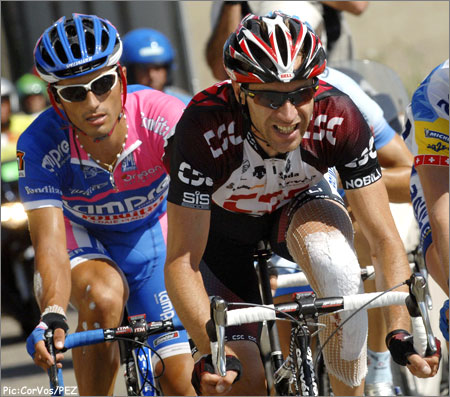 With the lead extending out to 4minutes and the days climbs finished except for the cat 4 hill at 19km to go, it really was starting to look like the day’s winner would be coming from the eight in front.

With Jens Voigt the best placed rider on GC at over 1hour 17minutes, the group was no threat to the overall lead and Discovery assumed the role of tempo riding on the front of the main pack. Not to bring the group back, but just to keep them at a sensible distance for the sake of security.

With the breakaways sharing the lead evenly, the managed to move out to nearly 8 minutes with 50km left to race.

At 25km to go Voigt suffered a rear wheel puncture (the only excitement of the day so far), but with the breakaway riders still working together for their common goal, there was no problem with him regaining the other seven.

Despite its lowly Fourth Category status, the Cфte de la Montagnиre: (1.4 km long @ 5.3 % grade) was the start of the action for those would be stage winners in the front group. 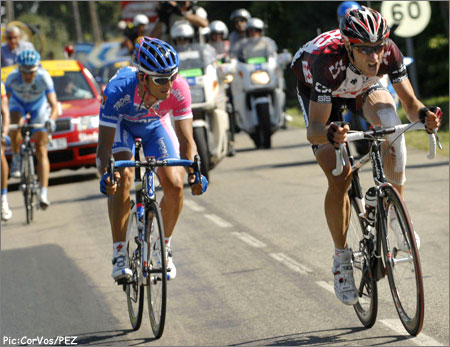 Elmiger was the first to try his luck with an attack but he soon found Millar on his wheel. They were countered by Voigt and then the group rode back together.

The attacks continued and the first victim was Lapmre’s Righi, who was dropped part way up the hill.

With 16km left to race, Voigt, Bennati Fothen and Elmiger set about on their four man time trial to the finish, with 7.45 to peloton and Millar and Tosatto still chasing hard at 20 seconds.

As the action hotted up at the front, the peloton actually switched it back a gear with Discovery allowing the other teams to spread across the road and share the tempo, with the break going back out to over 8 minutes with 10km left to race.

Noticeable at the back of the bunch were the whole of the remaining members of the Rabobank squad, seemingly disinterested and unmotivated to take any part in the days proceedings. 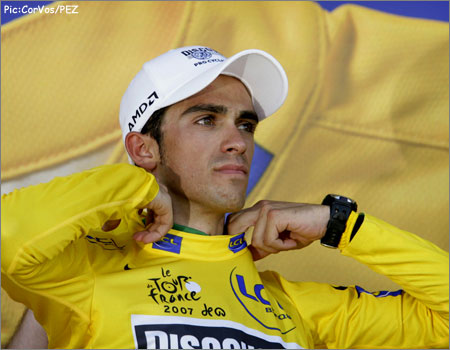 At the end of a rather uneventful day in the field, Contador donned his first ever Maillot Jaune.

With all four in the break looking as strong as the others, the informal team time trial was running smoothly through the final km’s with the gaps back to Millar and Tosatto getting blowing out to 1.30 and nearly 10 minutes back to the cruising peloton with 5km to go.

At 4km to go it was Voigt who opened the proceedings with an attack, quickly countered by Bennati. But as soon as he was caught, Voigt wen again, tis time taking the Italian with him and forcing Elmiger to chase as Fothen sat in the wheels.

At around 2.5km left to race, the four were back together and the real cat and mouse games were beginning.

Voigt had taken up station at the rear and everyone was trying to manoeuvre Bennati onto the front.

Fothen jumped again and led through the 1km to go banner, but it was Bennati again who showed why the others feared him, jumping on the wheel and bringing the four back together. 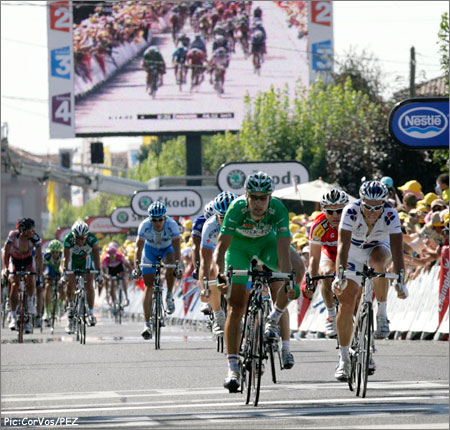 Elmiger rolled through to take the lead at around 700m to go and then from behind, Fothen goes for a long one. Bennati seemed to step across onto the wheel with ease and after the shortest of rests out sprinted the young German with time for a two handed victory salute.

Elmiger and Voigt sprinted it out for third, with the CSC rider beaten on the line. 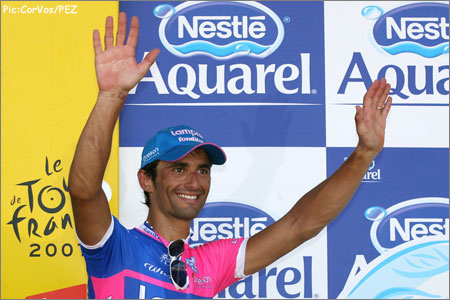 Back in the peloton, Discovery Channel were relieved of the front of the bunch at 4km to go as the Quickstep Innergetic team took over to guide Tom Boonen in to the finish for the remaining sprint point on offer. The green jersey wearer survived a late charge by Chavanel, to take 9th place ahead of the Frenchman with Hunter and Zabel taking 11th and 12th.

So another post mountains stage ends with a successful breakaway and after a day tucked safely in behind his team-mates, a first yellow jersey for the new race leader, Alberto Contador.

Tour de PEZ: Riders Give Us The Dope

Carmichael Sez: Winning Out Of The Break