TDF’07 St.19: Three With Yellow In Their Sights

We have lost a yellow jersey wearer and a pre-race favorite, now we are down to three riders who can win this Tour de France. The battle is on, Alberto Contador has 1 minute 50 seconds in hand from Cadel Evans and Levi Leipheimer is in third place another minute behind Evans. So in football parlance “it’s all to play for” read on…

The Early Leaders
Time trial specialist, Fabian Cancellara (CSC) looks like he has missed out on a Tour TT stage win, again! He looked good for the win, but Leif Hoste (Predictor) has put an end to his hopes on this technical, but flat course of 55.5 kilometers from Cognac to Angoulкme. The fast men were still to come and really who wins the stage is secondary to the battle for yellow.

Possible favorite for today, David Millar (Saunier Duval) has had a disastrous start as one of his wheels fell to pieces and he had to have a bike change. Schumacher (Gerolsteiner), Hincapie (Discovery) and Jose Ivan Gutierrez (Caisse d’Espargne) have all been going very well and are having a battle for the stage win with the help of a tail wind, its strong enough that most riders are using a 55 tooth chain ring. 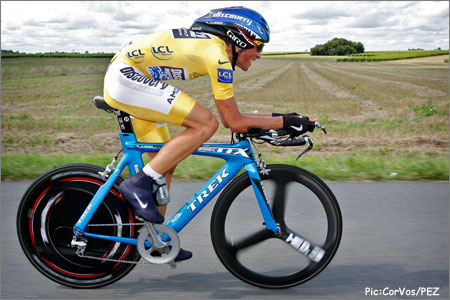 Schumacher fades as the race goes on, but Hincapie comes in with the fastest time so far, we only have to wait for Spanish Time Trial Champion, Gutierrez to hammer up the slight drag to the finish to take the lead from Hincapie by 6 seconds with a time of 1 hour 5 minutes and 11 seconds, could this be fast enough to take the stage? We will have to wait more than an hour to find out.

The Battle for Yellow commences
The last five are all readying themselves for the impending appointment with destiny. Evans, Contador and Leipheimer are all warming up on trainers under canopies in front of their respective buses, all looking thoughtful. Evans looks cool on the start ramp with his red Oakley’s and Specialized Aero helmet; he is soon into a smooth pedaling rhythm, deceptively fast, pushing a big gear. 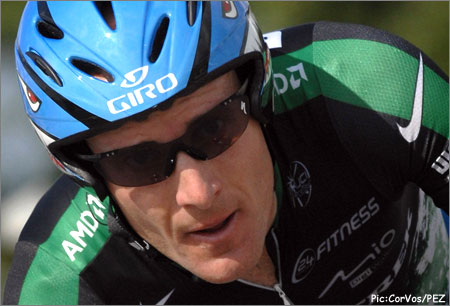 Contador has yellow Giro glasses and a blue Giro helmet with sharks teeth painted on the side and that man Lance is in the following car. Contador has a faster, less smooth pedaling style, but it seems to work as he looks to be faster than Evans.

Leipheimer at this point is faring well as he is fastest at the first time check and is now 49 seconds behind Evans overall and gaining. At the finish Gutierrez’s team mate Vladimir Karpets takes over the lead by 30 seconds as word comes in from the course that Carlos Sastre (CSC) is holding his own and onto a good ride, for a mountain man! 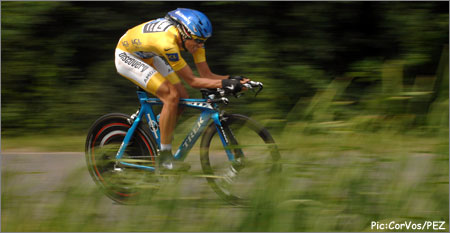 The First Time check
At the first time check at 17.5 kilometers, Leipheimer is fastest, Evans at 14 seconds and Contador at 36 seconds, so Evans has made 22 seconds on the yellow jersey, at that rate its not enough, but he is going to speed up if he doesn’t want the very Aerodynamic Leipheimer to take his second place overall. Sastre is keeping his fourth place overall safe as he is only 43 seconds down on Leipheimer and Zubeldia (Euskaltel) is nowhere. 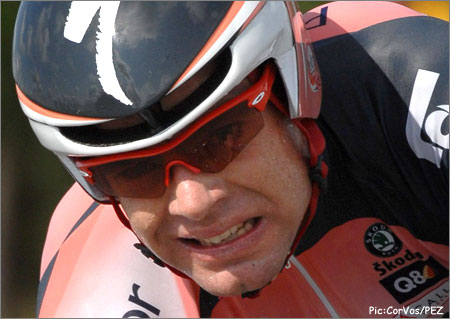 The Second Time Check
Leipheimer is still fastest at the 35 kilometer mark as Evans is fighting his Ridley all the way to get that little bit more speed out of it, he is now 35 seconds down on Liepheimer, so only has 22 seconds to play with and Contador has now only 55 seconds in hand for the overall on Evans, as he is 1 minute 29 seconds behind team mate, Leipheimer. Things are getting very close now as we could have all three within seconds of each other by the end of the day! 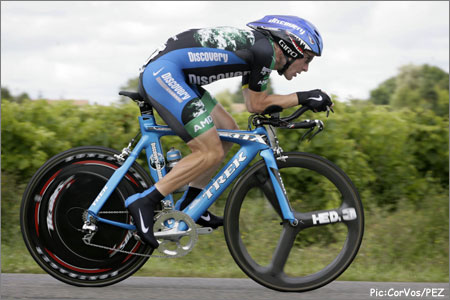 The Finish
Leipheimer is on fire as he passes Sastre and heads towards the finish in Angoulкme, he hammers up the finish straight to take the lead and the stage, with a time of 1 hour 2 minutes and44 seconds, we only now have to wait to see what else he will take today, 2nd overall, yellow? Over the slight rise with 5 kilometers to go and Contador is pulling everything out as the large crowd goes wild. Evans finishes and saves his second overall by 8 seconds, now we wait to see what Alberto has done. 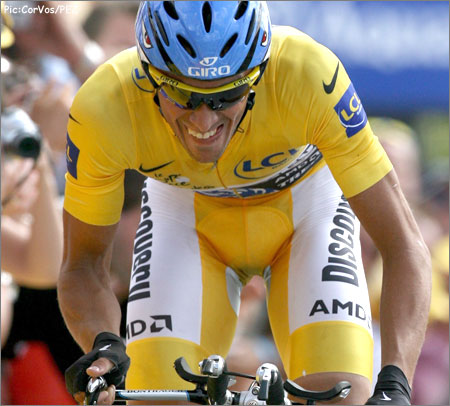 As the Spanish TV commentators go crazy for Contador, he looks to be under geared as he battles over the last flat section before the last kilometer. One last kilometer for glory! A last gear change and Bravo Alberto! Bravo! As he finishes and is mobbed by photographers, he has saved his overall by 23 seconds from Cadel Evans, so close all three could smell the sweat on the yellow jersey. As Delgado said “Leipheimer was like a motorbike today” but it wasn’t enough.

So that’s it, barring any accidents tomorrow, we have the winner of the 2007 Tour de France. The first three riders are all within 31 seconds, unbelievable! 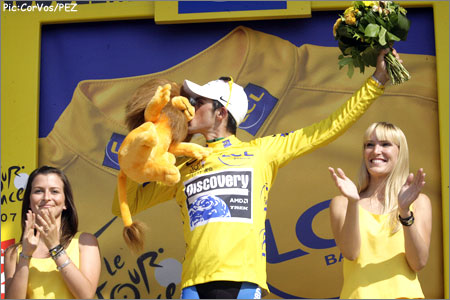 That’s a happy soon to be first timer at the Tour.

The problems for Alberto Contador have only just started, in Spain he is the new Indurain, the kiss of death to any rider and will the French and the press hound him? Probably!