Under threatening skies, a bright new hope has emerged as Alberto Contador seals the overall win and Italy’s Danielle Bennati shows that be it big or be it small, he is the man who can leave the bunch in his wake.

The Beginning of the End
When the final stage rolled slowly out of Marcoussis just before 2.00pm, there were still some unanswered questions in the peloton. 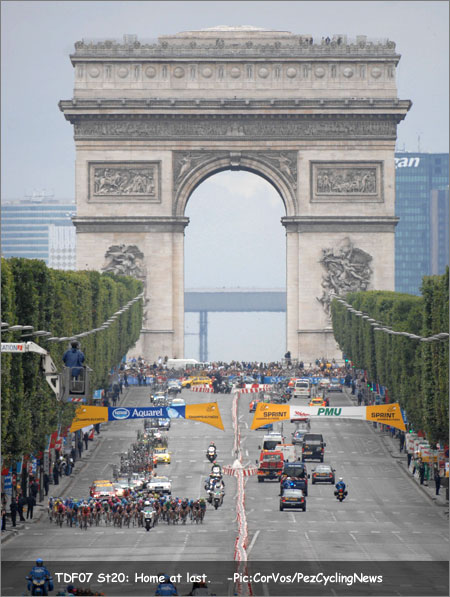 Would Cadel Evans, 23 seconds down on GC, actually contest the intermediate sprints and stage finish in search of time bonuses and a Tour de France win? Would Levi Leipheimer try and leapfrog Evans into second place with the same strategy? After all, his time gap to Evans was a more do-able eight seconds.

Would the GC contenders actually risk their podium places to improve one spot, when the forecast wet weather conditions had the potential to turn the Champs Elysees finish circuit into a skating rink?

When asked before the start, if the usual ‘gentleman’s agreement’ would stand and the GC race was over, Evans’ blunt answer was “No comment”. 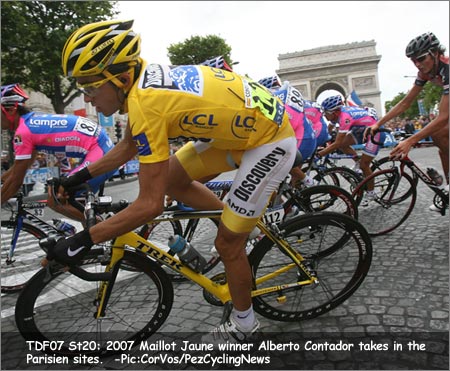 Tour winner elect, Alberto Contador, rolled out dressed in his yellow jersey together with the matching yellow shorts, helmet and bike. The combination was a more common sight amongst Tour leaders, than the Spaniard’s modest maiden appearance in yellow on Friday, where he simply put the coveted top on with his normal team strip. After holding on to his lead in the final time trial, he had certainly earned the right to show off and accessorize one of the most famous symbols in sport.

After the traditional rolling photo call, with the jersey wearers on the front of the peloton (including Amets Txurruka in white due to the fact that first and second placed in the Best Young Riders comp, happened to be wearing yellow and polka dots respectively), it was time for the traditional glass of champagne, delivered around the bunch by the man who would be the winner of the race in a few short hours.

The roads were dry for first 50km, however a few threatening spots of rain fell between the two virtually uncontested fourth cat KOM climbs. The few points on offer for the Cote de St-Remy-les-Chevreuse at 51km and the Cote de Chateaufort at 54.5km, were not enough to excite the interest of the bunch. 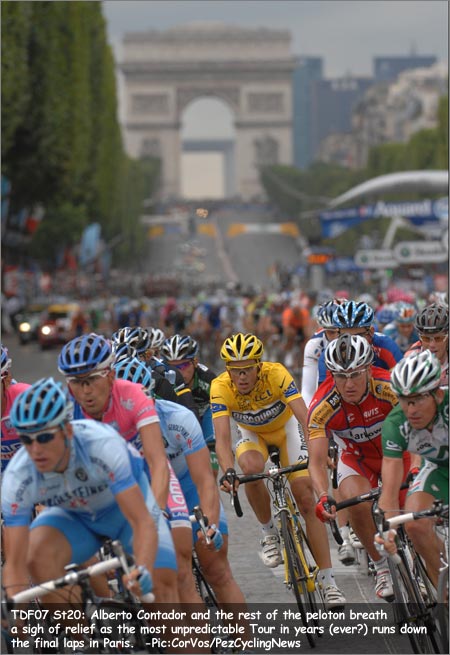 Opening Shots
The first intermediate sprint of the day came at Chatenay-Malabry (at 74km) and it was Quickstep’s Barredo and De Jongh slipping off the front of the peloton to make sure that the first points on offer didn’t go the way of Robert Hunter.

When Tom Boonen took to the start this morning wearing the green jersey, he had a comfortable but not unreachable 24point lead over stage 11 winner, Robert Hunter.

The theoretical formula for Hunter to take the jersey (ignoring the intermediate sprints) was that the South African had to win the stage and Boonen finish lower that 5th.

Lilian Jegou from FDJ joined the little breakaway and took the six second time bonus on offer ahead of the two Quickstep men.

With the peloton approaching the streets of Paris, having covered 80km at not a lot more than tourist pace, Discovery Channel moved their troops to the front to allow yellow jersey wearer Contador to arrive in the French capital at the head of the whole race.

Across the Place de la Concorde for the first passage, Discovery were on familiar ground, with George Hincapie leading a Tour de France winner up the most famous avenue in the world, for the eighth time in his cycling career.

Criterium par Excellence
With just under 50km remaining, the honour of the first real attack of the day went to Agritubel. Freddy Bichot shot off the front and built up a quick lead of 15seconds. Out of the following bunch to join him shot Horner and then Markus Burghardt, but by the top of the Champs Elysees and the turn at the Arc de Triomphe, the peloton was back together and finally hitting top speed.

A group of 10 riders managed to get clear of the peloton as they raced across the line to get six laps to go.

With the small gap quickly growing to 20seconds, the group mopped up the final intermediate time bonus meaning that the GC and green jersey would be decided on the line.

Discovery were playing the role of tour leaders and keeping pace on the front, but when the gap started to approach 30seconds, it was Barloworld who moved to the front to try and keep Hunter in with a shot at the stage finish and the green jersey.

As the gap hovered between 25 and 30 seconds, Barloworld’s chase effort was playing into the hands of Quickstep, who were getting an armchair ride to the sprint. In the bunch, it was almost a prelude to the parade laps, as Quickstep, Discovery and Lampre were all riding in team formation to keep the best setup for their respective sprinters.

Flecha, one of the lead groups better sprinters, took up a comfortable place at the rear of the ten man bunch, along with Charteau and Knees, while Delage and the two Caisse d’Epargne riders made sure the tempo was high as the rain clouds started to threaten again.

Taking the turn beneath the Arc de Triomphe with 24km to go, the gap to the leading 10 had gone out further to nearly 45 seconds, with Barloworld seemingly not able to peg back the gap, or string the peloton out into the single file form usually seen by the stronger sprinters teams.

Thor Hushovd made the same observation and the third last time up the hill, Credit Agricole sent three riders to the front to help bring the gap down. Showing the experience of a well drilled ProTour squad, the gap dropped back to a manageable 30seconds almost immediately. 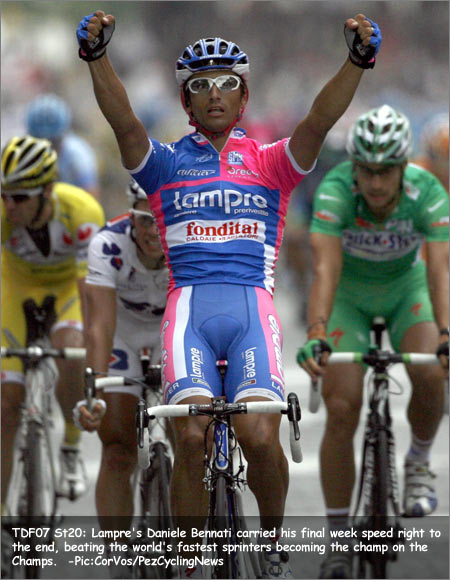 The Grand Finale
10 kilometres to go in the 2007 Tour de France and the 10 rider break was back to 20 seconds. Credit Agricole were taking more of an interest in chasing as Barloworld seemed to be tiring.

Up front, the riders were looking to each other and through the tunnel it was Gutierrez of Caisse d’Epargne attacking as the group emerged back in to what there was of the sunlight.

Flecha was straight on the wheel and the hesitation in the rest of the group saw the gap cut to 12 seconds.

The Rabobank classics man took his first turns at the front as the rest of his breakaway group were absorbed by the peloton, but with only 7 seconds as the bunch took the bell, it was a huge ask to think the two would stay away. By the top of the Champs Elysees, the peloton was all back together and being led by Lampre.

Down the hill for the final Time and Bennati’s five man train were taking control with Discovery keeping an eye on things just behind.

Three kilometres to go, Boonen was sitting comfortably in around 20th wheel as the sprinters teams began to finalise their set up for the sprint.

Under the final kilometre sign and Thor Hushovd’s CA men were taking charge with Quick Step lined up ready to take advantage. As the group swung into the finishing straight, Zabel had moved up into fourth wheel and it was looking like a top class showdown between the Tour’s remaining fast men.

Hunter jumped early to try and get the drop, but was not able to make enough headway .

From front on, it was Bennati, Hushovd, Zabel and Hunter lined out across the road, with the Italian employing a sneaky, but legal, right hand drift to ensure it was him who raised the arms to take the final stage.

So after no Tour stage wins for Lampre since 2001 they now have two in four days thanks to Daniele Bennati, who has shown he is just as dangerous against a full complement of the world’s fastest finishers as he is in a small breakaway group. 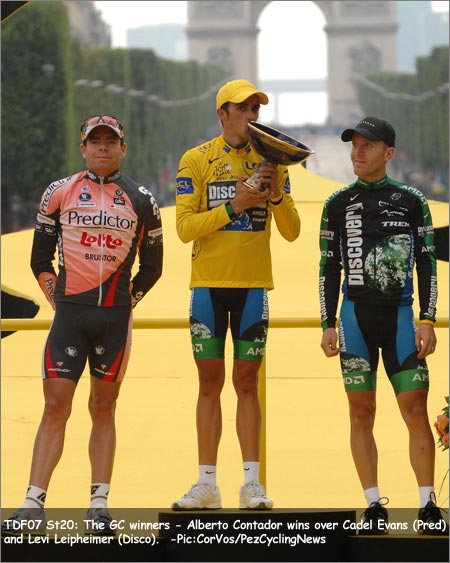 In the end, there was no change to the GC, with Alberto Contador taking his slim lead right to the line and Cadel Evans cementing his second place between the Discovery pairing of Contador and Levi Leipheimer.

The 24 year old Spaniard takes home both the yellow and white jersey and adds an eighth Tour de France victory to Johan Bruyneel’s palmares as a director.

A great finish to a Tour that was less than great at times, but here’s hoping a new generation of riders will be able to start generating the right kind of “positive” headlines.