Wednesday’s jaunt along the rolling hills of Champagne, Brie (I’ll take both thanks), and Yonne in the countryside east of Paris is once again tailor-made for the early break, a long drawn out chase, and a thrilling finale. If we’re lucky, the final kilometer will be half as enthralling as yesterday’s – because I still can’t stop gaping at that finish.

Let’s make this short and sweet and get down to the fun part inside the final few minutes. Quick re-cap of the day – break gets away about 35k into the race after another piano practice start, numbering five: Juan Antonio Flecha (Rabobank), Gorka Verdugo (Euskaltel – Euskadi), Matthieu Sprick (Bouygues Telecom), Sylvain Chavanel (Cofidis), and Christian Knees (Milram). Oh yay, France has their boy Chavanel and the Flecha fans around the world finally get to see some Flecha break action.

Some More Falling Down
Early in the festivities, Caisse D’Epargne’s Xandio went down in a wreck, broke his collarbone, and was out of the race. New French hope, Remy Di Gregorio also went down and got banged up somethin’ fierce, but he managed to carry on – even getting some air-time during the finale as he struggled home off the back all heroic-like.

Apart from another small wreck, some hard chasing (CSC earned their pay today keeping that high-powered break in check), and the announcement that Jens Voigt extended his contract with CSC for another two years – that about sums it up. 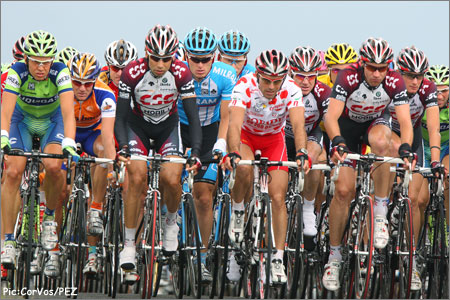 The head of affairs saw the continual presence of CSC, and of course Jens Voigt, who we’ll be able to watch for at least another two years.

Could It Maybe Go The Distance? Ha, That’s Funny
So the break keeps coming down down down, I start to ask myself, could it possibly go all the way? Of course not I answer back to myself, and yet I watch and hope and ponder possible scenarios that might see the break to the line. Around this time, my daydream is interrupted by the last desperate attacks within the break, as everyone wants that last little chance to stay away for 48 seconds longer than everyone else and that’s the true death knell. Finally, it’s just Flecha and Knees who flexed their muscles hardest, or were just too damn stubborn to sit up, but then they look behind and take in the situation: barring a rift opening in the road behind them, their day is done, they shake hands, and then the real race starts:

How Do You Say? Ah Yes, The Business End Of The Race
Inside of the final 5k the field is absolutely flying, hitting speeds upwards of 60k on rolling roads – at one point the camera shows the field stretched almost single file from front to back, but only for a tick, as there’s no keeping the sprinter teams from doing anything and everything imaginable to get control of the front.

During this crucial time over and over again it’s one rider who manages to come to the front and do his hammerin best: Robbie McEwen’s locomotive, Johan Van Summeren. Van Summeren can been seen taking massive pull after massive pull, and sure he looks like he’s going hard, but when you see the rider on his wheel (awful faces), it starts to become very obvious just how fast this man is railing it. Once Van Summeren has had his fun, the near free-for-all really starts.

A Beautiful Display
The fighting for control of the front is absolutely incredible. All of the teams with any hopes can be seen in the writhing peloton in perfect formation – lines of 3-5 teammates all together amassing near the front trying to protect their men, looking for the right moment to make the hopefully race-winning move to the very front to launch their man. If you’ve ever been involved in a field finish in a race, you know just how hard it is to keep it together, and to see five or six TEAMS with multiple riders apiece all managing to stay connected in a group that appears to be ruled by chaos, it’s damn near breathtaking.

Heading To The Final Kilometer
Back to the reporting: Inside 3k to go and Barloworld starts coming up for Robbie Hunter, then Gerolsteiner’s German Champ Wegmann absolutely lays it down with 2k to go. Wow, it looks like he’s sprinting for the finish, and that’s just to keep from getting swarmed. Here comes T-Mobile, and oh lord, now it’s QuickStep inside the final kilometer. The road tightens around 500m to go, and QuickStep loses control and it’s anybodies race at this point…

The Sprint!
But then it’s Julian Dean in his Kiwi National Champ jersey leading out Thor Hushovd and suddenly it becomes very clear as Hushovd launches to a fantastic gap and looks to have it easily until Barloworld’s Robbie Hunter manages to squeeze through an opening gap and launches across to Hushovd’s wheel and then turns on the afterburners and comes right around him with incredible speed…but the line is just…so…close… 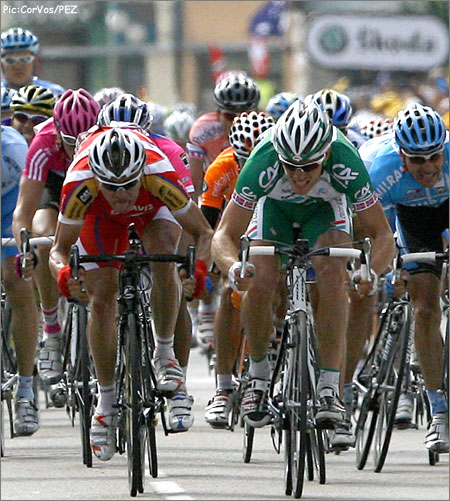 It was basically a two-up sprint for the win inside the final 100m: Robbie Hunter v. Thor Hushovd. 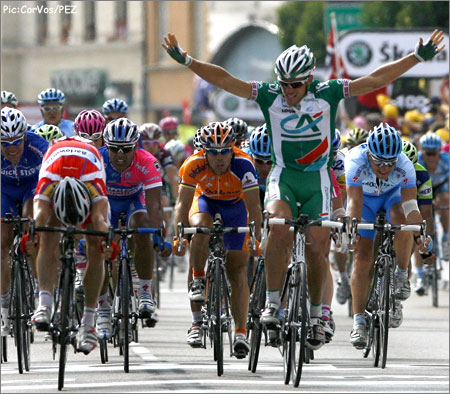 For one small second, it looks like Hushovd thinks he might have just been Freire’d on the line a la Zabel on the Via Roma…

Hunter throws his bike on the line, but Hushovd has it by a comfortable half bike for the first win of his 2007 campaign. The contrast in the two’s reactions is huge: Hushovd leans back, long arms spread wide, pure joy on his face as he answers all the questions about his Green Jersey bid and his disappointing start so far (both in the Tour and his entire 2007 season) in one emphatic 200m effort, while Hunter, the underdog sprinter on the underdog team comes within just a few feet of an absolutely gigantic win for both himself and his Barloworld squad, and the opposite reaction is obvious, as the frustration and anger boil over. 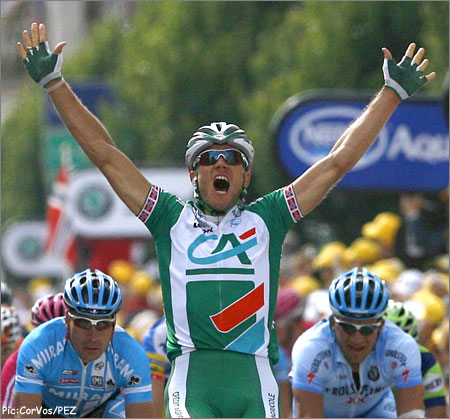 That’s good stuff, I don’t care who ya are. 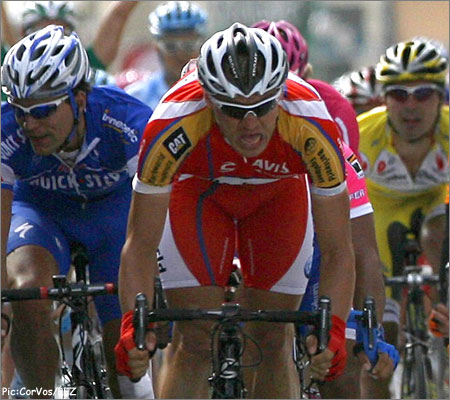 Looking down the results, a few things pop up: Freire took a solid 3rd, followed by the perpetually there and fantastically consistent Erik Zabel. A little bit further down, there’s Steegmans in 6th…where’s Boonen? Two back in 8th. Is there a changing of the guard within the QuickStep sprinter hierarchy? Obviously it was chaotic and there’s no real telling who had open road and who didn’t, but still, Steegmans was once again in front. 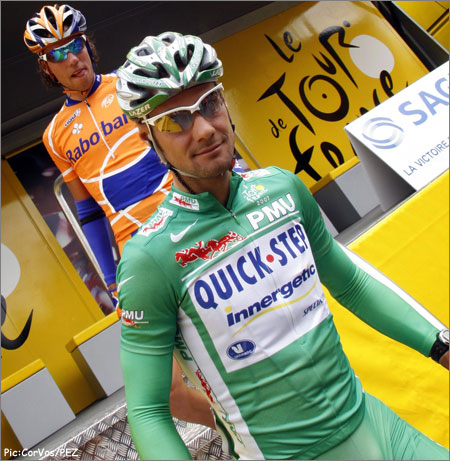 Boonen started the day in Green…and ended it in Green as well. Still no win, but there’s no arguing with the Points Lead.

Whatever that situation may be, Tom Boonen still stands tall in his Green Jersey – there’s no arguing with that.

The interesting question – where’s Robbie Mac? Way back in 16th. After the devastating first stage sprint, Robbie has appeared at well under 100%, apparently suffering from the continuing after effects of the hard crash in Stage 1. 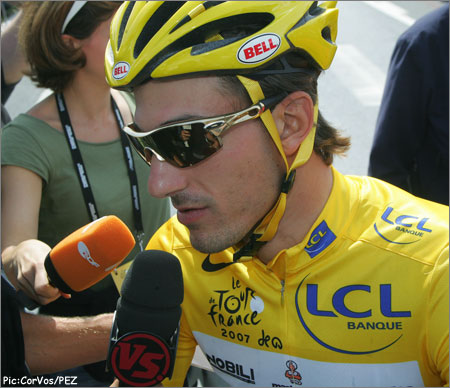 What can I say? I wake up in the morning and I piss excellence… It certainly appears this way as we are continually amazed by one Fabian Cancellara.

Stage Five Should Be A Goodie
Tomorrow’s Stage 5 includes EIGHT categorized climbs over its 182.5km distance: 4 Cat 4’s, 3 Cat 3’s, and one-time for the Cat 2. Apart from the Maillot Pois really coming into prominent play, the climb of the Cat 3 Cфte de la Croix de la Libйration with only 8ish kilometers left in the day will most likely see the winning move – the question: will the winning move launch from a dwindling field or will it come out of a break. Tomorrow looks good for a break and an opportunistic rider hell-bent on mountain points (could we see a real Dot hope make a move?), but the big question: will CSC try and protect Cancellara’s overall lead? He’s certainly going well enough to hold on over the lumpy stage, but is it worth it? Tune in early tomorrow, because the action will definitely be hot well before the final 5k.