The bruised and battle weary riders lined up this morning for today’s flat, semi-long stage down to Bourg-en-Bresse, some happier than others. After yesterday’s complete carnage, there were a few less faces on the start line, and a few with quite a bit of bandaging. An early break and a mad dash for the line were on the menu, the only question was who’d be the break and who’d take the glory on the line.

Most notable among the victims was the overall favorite, Alexander Vinokourov of the Astana team. He spent a most likely less-than-enjoyable five hours in the hospital last night after his crash which not only hurt him, it also hurt his overall position by ninety seconds. His teammate and another one to watch for the overall, Andreas Kloden, managed a hairline fracture in his tailbone in the same melee yesterday, but toughed it out this morning and kitted up. With Astana bleeding in the water, would the group make them work hard on the sprinters stage? Or, would they let a group go away and save all the hammers for tomorrow’s first foray into the hills? We’d find out. 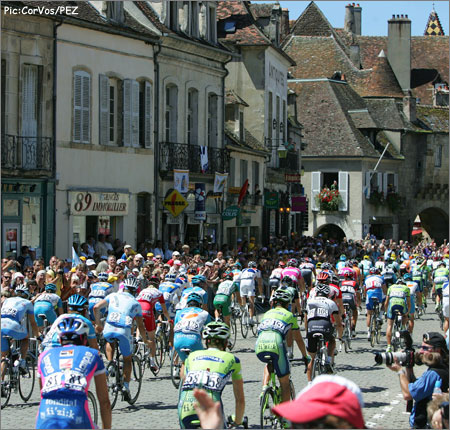 Hey…it couldn’t have been too terribly fast if Wiggins rode to an almost 20 minute lead.

The estimable Bradley Wiggins of the Cofidis team decided to take his leave of the peloton a mere 2 kilometers into the race, and he quickly built up enough time to become the virtual yellow jersey, gaining almost 9 minutes a mere 32 kilometers into the race. By 40km, it was 11 minutes. At 50km, the time trial specialist held over 15 minutes. The group did not fear this one man much, it seemed.

Behind, Tom Boonen (Quick Step) beat Robbie Hunter (Barloworld) for the hot spot sprint. I wonder if Hunter had the same violent gesticulations as when he lost to Thor Hushovd the other day, that was most humorous. 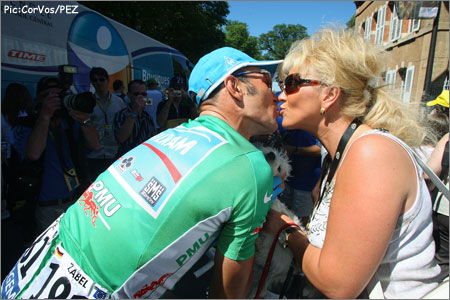 Erik Zabel got a good luck kiss from his wife at the start, but there wasn’t much he could do to stop Tommeke today.

When Wiggins’ lead sniffed 18 minutes, the usual suspects’ teams put a few soldiers on the front, and with the hook set, the reeling began. A feed, a mass natural break, and at 107k into the race, his lead had been shaved to around 8 minutes.

Another sprint point saw Wiggins’ lead cut down even more, as Tom Boonen’s Quick Step team took 1,2, and 3rd place points. Zabel’s brief stay in verdant Vert was over, and the jersey went back on to Boonen’s shoulders.

Alas, at 15km to go, the lead was under one minute, and the inevitable jockeying for position began for the final dash to the line, but holding Wiggins in the fire at 25 seconds or so, as you wouldn’t want any opportunistic counter attacks to go this close to the finish, now would we?

At 7km, the valiant all-day break was swept up, and Mr. Wiggins took a seat at the back of the class, where he saw Vinokourov, who had just done the ‘throat slash’? gesture. Clearly not good for the race favorite.

The pace hotted up right quick, and the usual jumble of sprinters teams came and went at the front as they tried to usher their main men into the best position. Milram and Rabobank came to the fore, only to be folded on by Quick Step, who in the last few hundred meters, managed to show Tom Boonen a clean look at the line, where he took his first win of the 2007 Tour de France, holding off a hard charging Oscar Freire, and a host of the usual names. Still no glory for the little Barloworld team and their man Robbie Hunter. 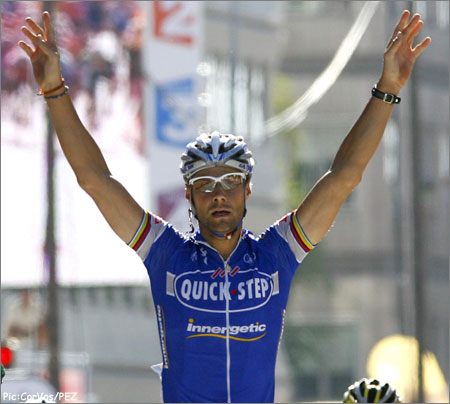 So, the first week is in the books, and tomorrow the riders face the first mountains of the stage, and we shall see the big guns finally come out to play. Stay tuned to PEZ for all the best, out-of-the-box coverage!