On the first BIG day in the mountains, the future of cycling took the race by the scruff of the neck and gave it a good shake. The young German rider, Gerdemann, attacked his escape group on the 1st cat Col de la Colombiиre and held them all at bay for the stage and yellow. 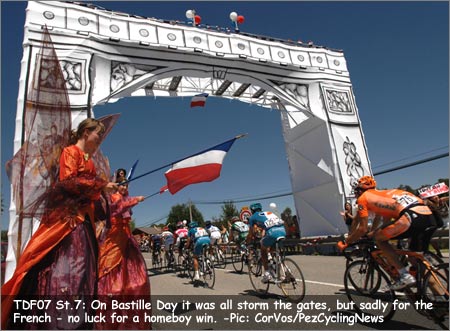 Today’s Bastille Day stage will not be a sprinter fest, that’s for sure! This is the first Alpine stage of the 94th Tour and with just under 200 kilometers to cover and four nice big climbs we should see the cream come to the top. On the menu today the riders will be served two third cat climbs (Cфte de Corlier and Cфte de Cruseilles), one fourth cat (Cфte Peguin) and for dessert, the first cat Col de la Colombiиre. The Colombiиre is a beauty, 16 kilometers long with 7% gradients, climbing to 1618 meter altitude, from the summit there is 15 fast downhill kilometers to the finish in Le Grand-Bornand.

The Early Action
On the climb of the Corlier, the yellow jersey of Fabian Cancellara was seen to be in trouble as Gorka Verdugo (Euskaltel) and “The Stickman” Michael Rasmussen (Rabobank) put the pressure on for Mountain points. At the top it was Rasmussen, Verdugo, Chavanel and Paulinho collecting the points, they wait for what is now the main pack, but more attacks start as the fuse has been lit.

Behind the action, Jens Voigt (CSC) has towed the yellow Cancellara back to the main peloton which is being lead by French Champ Moreau. With still 130 kilometers to the finish we have 15 riders who have built up a 5 minute gap on the bunch, which includes all the overall contenders. 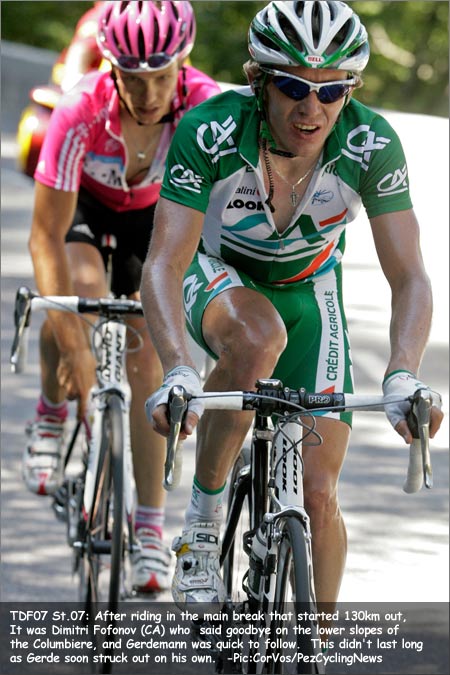 Predictor, CSC and Ag2r are leading the bunch at a reasonable pace, eight minutes down, but this is not yet a concerted effort to bring back the bold escapees as we cross the Rhфne with 100 kilometers to go. The climb of the Cфte de Cruseilles is looming in the distance as the gap for the leaders has shortened to six and a half minutes under a burning sun, the main chasers of star men has been whittled down to a keen group of around forty odd riders, but with others re-joining all the time on the easier roads between the climbs. 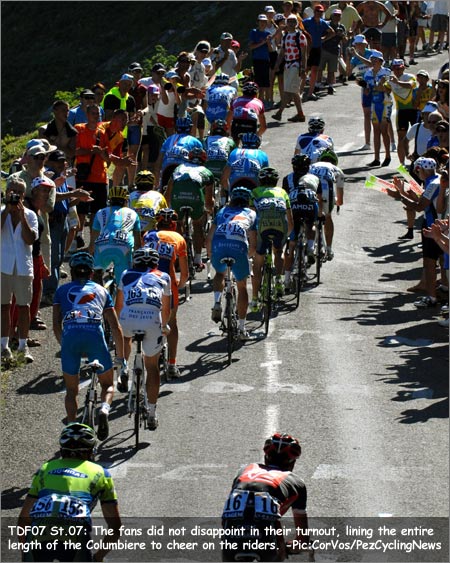 As the leaders hit the Cфte de Cruseiles, after 130 kilometers covered, there are a few tired legs and some cracks start to appear in the front group as David De La Fuente (Saunier Duval) rides away to take the mountain prime, when the chaser cross the summit the lead has grown a little to 6 minutes 47 seconds and next we have the Cфte de Peguin to look forward to.

Over the top of the Peguin De La Fuente takes the honors’ again from Lefevre and Fofonov, CSC are still on the front chasing, unlikely there are doing this to protect the yellow jersey as there is no chance that Cancellara will be with the leaders after the ascent of the Col de la Colombiиre, specially as he is lending a hand in the chase himself. The fifteen leaders are readying themselves for the first monster climb of this years Tour, if they still have a gap by the top of the Colombiиr they should be able to sprint for the win between them, all nail bighting stuff!

The Action End of the Day
Wegmann (Gerolsteiner), German National Champion, is doing a good job of towing the leaders along the valley towards their “Carvario.” The snow-capped Alps can be seen in the distance putting fear into the hearts of the non-climbers as they are facing 16 kilometers of torture and suffering before they get the relief of tonight’s massage.

Ruben Pйrez (Euskaltel) ties a little attack, for no apparent reason, except maybe to soften the other for a serious jump from team mate Landaluze. The Lampre team have now taken the helm of the good ship “Hopeful Chasers” as the leaders have four and a half minutes in hand as they start the major climb. First attack comes from Gutierrez (Caisse d’Epargne), De La Fuente is soon up to him as “El Falco” Salvodelli gets dropped, soon to be joined by Lefevre and Vaugrenard.

Meantime the bunch is thinning out under the impetus of Rabobank and with a wave of his hand, Cancellara gives up and drops off the pace, his last few kilometers of yellow jersey wearing will be hard. Fofonov and Gerdemann lead the race followed at 40 seconds by De La Fuente, Landaluze and a tiring Gutierrez on this long climb of the Colombiиre. Twenty kilometers from the finish and five from the top, T-Mobile rider, Gerdemann attacks his companion Fofonov putting a lot of fresh air between them, as behind the stragglers/strugglers of the break-away are being eaten up by “BIG Teeth” Boogerd of Rabobank.

At the top, through an enormous crowd, Linus Gerdemann, frothing at the mouth like a race horse, takes the points followed by Landaluze, De La Fuente and Fofonov, Caisse d’Epargne are meanwhile decimating the peloton as their pace setting is sending riders out the back at an alarming rate. Rasmussen jumps off the front of the whittled down chasers to sweep up the crumbs of the mountain points and then its eyes down and crossed fingers for the descent into Le Grand Bornand.

This is a very fast descent and the leading riders are taking chances as both Gerdemann and Landaluze nearly loose it on the bends. “Vino” is hanging on the back and not looking too happy, maybe his recent crashes have affected his confidence.

The young Gerdemann is pilling on the pressure in the last 5 kilometers as he can feel the win, Landaluze is over 30 seconds behind and wont catch the flying German, the bunch is a further three minutes behind, so no worries. Gerdemann will take the stage and the coveted yellow jersey, not bad at only 24 years old. 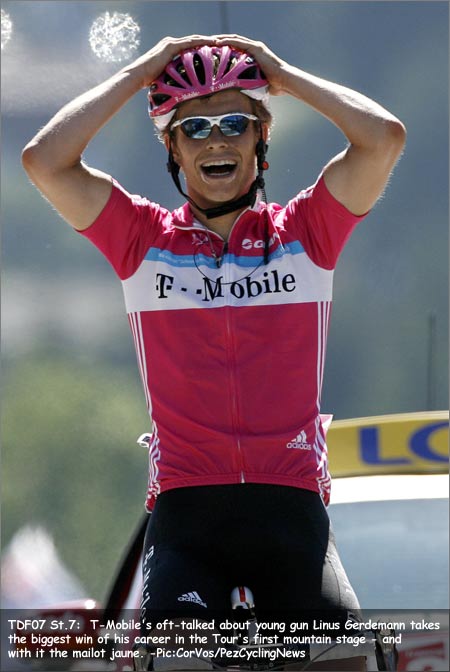 Gerdemann needs to be carried from his bike to the pre-podium caravan, holding back the tears of joy, the man is interviewed on probably the biggest day of his young life. Barloworld’s Soler Hernanadez does a brilliant ride to come in fourth position. All the stars come home safely to fight another day. No French win on Bastille day, what a shame! 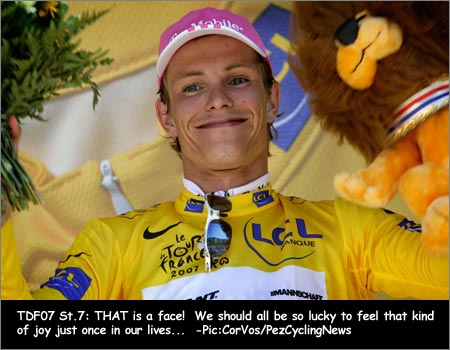 Tomorrow SIX! Yes six big mountains to cross, could be a very decisive day, so stay tuned to PEZ for all the action.