The Tour was treated to the purest edict of heroism today, as the Barloworld team confirmed their inclusion to their first Tour, by launching relative unknown Colombian Mauricio Soler to a fine solo victory after attacking hard over the ghastly Galibier. Behind, the overall contenders traded haymakers on the steep slopes to put as much time into the weak as they could…continue on for all the details!

After Sunday’s relative shadow boxing in the Alps, most would think that the last day in these mountains, the hardest day to boot, would provide the fireworks to better align an approximation of the GC come Paris. If the big contenders wanted to show themselves, this would be the last chance of the Alps to do so. 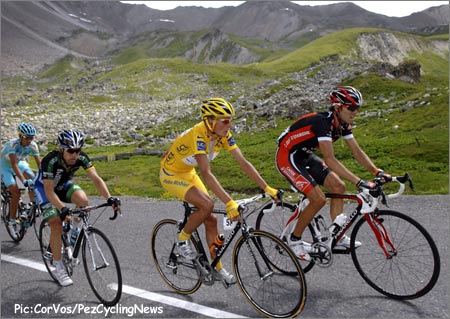 Rasmussen and Valverde are 1-2 on GC, and they’re riding like it. They’re never far from each other.

Beginning with the tortuous Col d’Iseran (the HC climb of 15km at 6%) there was palpable fear the group would go from the gun, but only a few brave souls jumped out to play, with all the favorites firmly embedded in the group, saving themselves for the hell to come in the form of two dastardly climbs: The Telegraphe, and the Galibier (Cat 1 and HC, respectively) 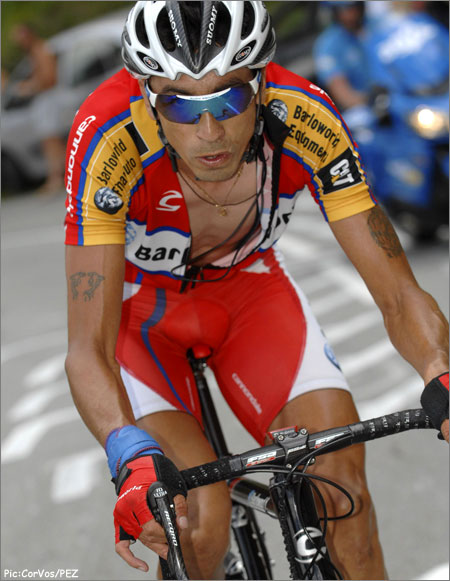 Soler took matters into his own hands with a superb solo effort that netted the win in Briancon.

Eyes wide open, the favorites watched each other, and Rabobank steered the ship, with GC favorite Menchov, and enigmatic yellow jersey Rasmussen in tow. And so it goes…..

It stayed the same over the Telegraphe, making it evident the infantry would be left to hang, the armory was saving its shells for the Galibier. 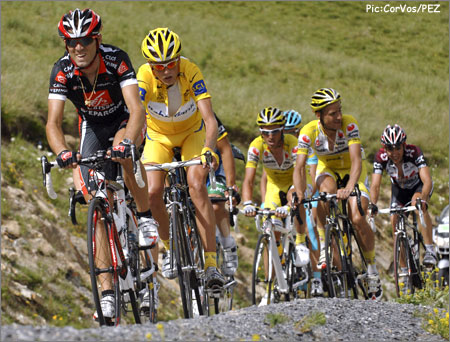 As the riders hit the huge end climb, Soler had bridged to the front runners, took a breath, then he went away solo, effortlessly. Seeing no threat, the group detached themselves from him as he accelerated a bit and left on his own. Little did the group behind know the latest revelation of the Tour had shown himself. 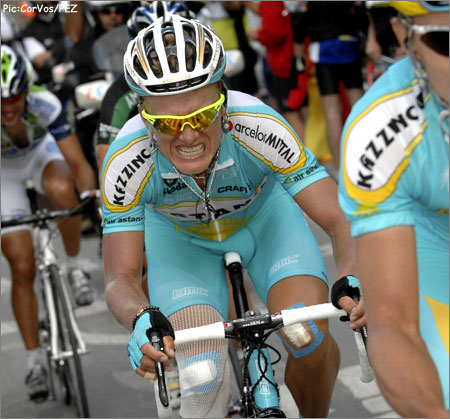 The remnants of the original breakway splintered to pieces as their ship sank, some grabbed onto each other for safety up the hill, some just dropped anchor and seemingly stood still. Behind, the big engines revved, and the game was on. Valverde was first to go in an effort to shed Vino and shorten the group of favorites. The usual suspects tacked on attentively: Rasmussen, Evans, Leipheimer, Contador, Moreau, Menchov, Contador, Kloden. As Valverde had most likely hoped, Vinokourov could not follow the wheels, and instead attached himself to some teammates and paced himself, hopeful to limit the losses up the hill, the pain on his face evident!

Valverde and Evans were the only two to push the pace at first, trading hard pulls (attacks?) to make the gap stick, and the rest seemed content to make a pain face and sit in. Leipheimer was in a good strategic position with Popo and Gusev up the road. And then the group spat forth Contador, allowing Leipheimer even more strategic latitude.

Rasmussen’s face twisted as he sat near, but not on, the front. Kloden followed wheels. They all watched Contador scurry up the hill, waiting for no one. Evans made a valiant effort to bridge, which he did, but he dropped a quarter in the jukebox and headed back to the group as soon as he had left it, unable to follow the young Spaniard’s tempo.

Discovery Channel’s world got a bit brighter as Popo, who had remained out front from the original breakway, was joined by Contador at the summit, and the two put an earnest chase together to track down the flying Soler, who was still alone out front. The rest of the break had disintegrated, its pieces – except Astarloza caught in no mans land -absorbed and shot out the back of the chase groups. 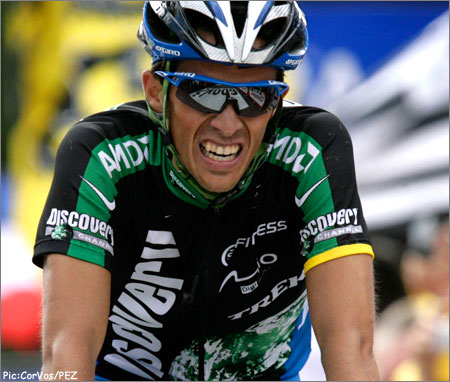 Alberto Contador is riding an incredible Tour de France so far. Many expected a good ride, but this is beyond expectations and arguably more impressive than his early season spectacular run of results.

Soler, a virtual unknown from Colombia, took the race by the horns…crossed the summit alone then zipped up his jersey and rocketed down the twisty descent. Face twisted in belief, he waited for no one and nothing.

Evans tried to bring it back, but after cresting, saw fit to sit up and wait for the yellow jersey group. Ahead, The Disco Duo of Popo and Contador, did a two-man time trial to catch up Soler, roughly a minute behind of the leader, ahead of the chase.

The favorite-laden chase group was 2:33 behind the Colombian soon-to-be-star, who rolled under 10k banner, head down, teeth gritted.

Then a split formed after Evans let a gap grow. Evans was ostracized and forced to close it, but we may have seen the change in leadership in Astana as Kloden took up the chase, closing the gap to the front, but lengthening the split to his captain Vino. 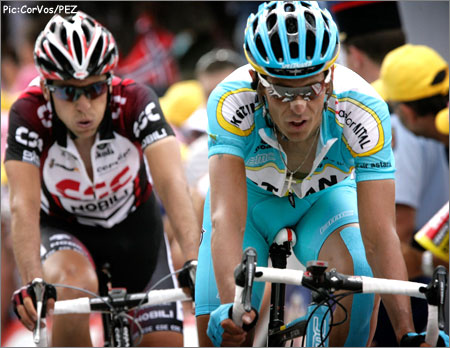 Andreas Kloeden hasn’t done too much of note so far except for fall down, but he is still well within striking distance…and as the best time triallist of the contenders, who knows?

Leipheimer tried some politics, but it ended in finger pointing and shouting. The business end of the split was Kim Kirchen (T-Mobile), Alejandro Valverde and Ivбn Gutiйrrez (Caisse d’Epargne), Mikel Astarloza (Euskaltel-Euskadi) and Michael Rasmussen (Rabobank) at 1.15. They drove hard at the front, shoulders swaying and faces drawn, chipping away at Popo and Contador, who were caught at 5.5k to go.

Leipheimer’s best possible scenario came to fruition as the group finally and somewhat unbelievably came together and he found himself with 2 teammates. Suddenly the big names all worked together to chase Soler, as they clearly wanted it, they didn’t want to let the no name to take the glory of the stage to Briancon. It was 13 v 1 in the closing kilometers.

Popo drove hard at the 1k kite, then Evans helped. Moreau fell off the pace, perhaps hurting from Sunday’s antics. Sastre fell off, too. Soler buckled down then found another ounce of strength and pedaled on pure courage to take the Barloworld team’s first win of the tour. Vindication, completely. Valverde kicked to get the time bonus and a well earned 2nd place. Evans exorcised some “you don’t attack” demons and took third after animating the crucial points of the race. 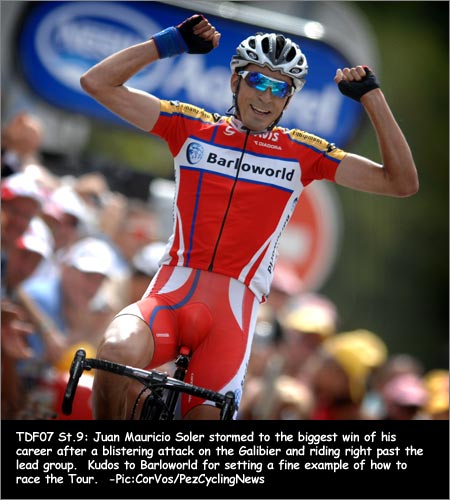 Barloworld has had a fantastic Tour de France so far – first with Hunter’s brilliant sprinting, and now Soler’s out of this world solo performance today.

What a race! Soler is a new star, Kloden is most likely the new leader of Astana as Vino limped in almost three and a half minutes back.

With Rasmussen still in yellow, two Time Trials and the decisive Pyrenees soon to come, race favorite Vinokourov seemingly written off, this is still anybody’s Tour! Stay tuned to PEZ for your one of a kind coverage! 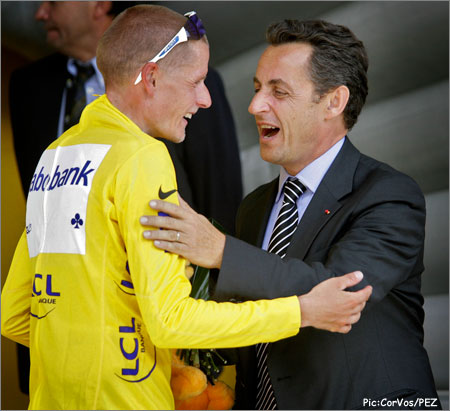 Michael Rasmussen got a pat on the back after the stage from none other than the French Prime Minister, Nicolas Sarkozy.