“One day, you have to stop dreaming and face the reality that you can’t win the Tour,” the pragmatic words of Scotland’s Robert Millar. There’s nothing wrong with chasing your dreams, but as a professional bike rider it can waste much of your career. Instead of riding a programme where they could secure good palmares, some riders “save” themselves for the Tour and waste golden opportunities. So, who’s dreaming, who’s legit, or who has the media dreaming for them?

Looking at the list of Yellow Jersey hopefuls, it looks a lot like last year after the Puerto exodus led by the two top favorites: Jan Ullrich and Ivan Basso. In short – it’s wide, wide open with any number of possibilities, and on paper and at least in the lead-up – no clear-cut favorite.

Sure, Alexandre Vinokourov is the bookies’ pick, but as Ed Hood points out, “a win in the Vuelta doesn’t necessarily mean that a win in the Tour is possible. Ask Toni Rominger, Alex Zulle, or Roberto Heras. Vino is also prone to that fatal ‘bad day,’ Lance had them too, but nobody knew when.” 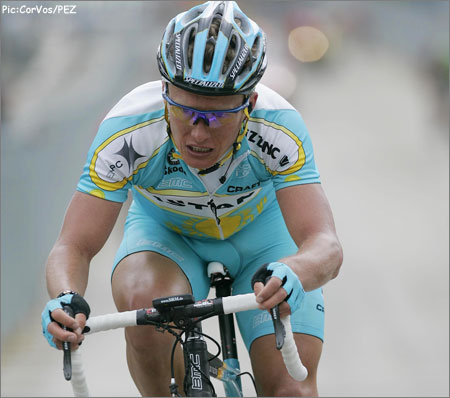 In looking for a favorite, I think it’s helpful to look at what appear to be the three dominant teams: Astana, CSC, and Caisse D’Epargne.

Astana
Astana has the aforementioned Alexandre Vinokourov as well as another fine pedigreed contender: Andreas Kloeden. Vino has a Vuelta to his credit, but Kloedi has something no one else at this year’s Tour has – a podium finish with Lance Armstrong still in the game…oh wait, that’s incorrect, I forgot about Vinokourov in 2003. Oh well, point still stands – the two biggest threats for the overall right now. 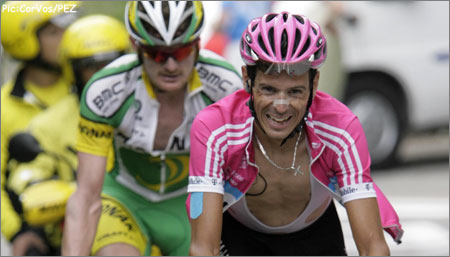 Remember Alpe D’Huez last year? Kloeden set the pace most of the way up the climb. He can move uphill very rapidly.

Hands down, I think this is Andreas Kloeden’s year to win the Tour de France. He has had about as perfect of a lead-up to the Tour de France as anyone could hope for. He took Tirreno-Adriatico early in the season, then the Circuit De La Sarthe, and finished the Tour de Suisse in fine fashion with three consecutive podium finishes over the final trio of days. His preparation has been perfect, the talent is without a doubt there, and the experience is expansive.

Matter of fact, coincidence has it that our favorite Scotsman not named Millar, Ed Hood, is thinking the same: “Last year, early in the Tour, I asked Chris Horner (Predictor/Lotto) who his favourite was: “In the Tour, you have to go on track record – Andreas Kloeden is the man!” If Floyd Landis legal team fail, then Kloden moves-up to second in the 2006 Tour. Take away Oscar Pereiro’s 30 minute time bonus, and Kloden would have topped the podium.
I’m with Chris, for me it’s Kloeden. 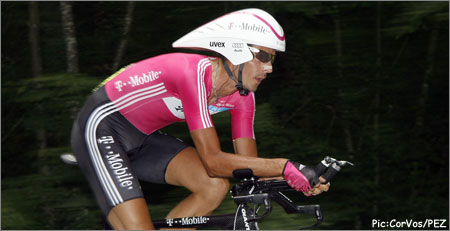 He’s a damn fine time triallist as well. He’s a Grand Tour racer to a T.

Then there’s the impressive Astana team to deal with as well. So you start Le Tour with two protected riders, most likely one will fade, and just think, if Vino loses time, you’ve got a Joker for virtually every possible stage finish imaginable. If Kloeden fades, he becomes a super-domestique. I don’t see the possibility for real in-fighting here, and if the two are THAT strong that they get to a point where they’re 1-2, then we should be so lucky, as we might get some kind of entertaining Hinault-Lemond duel, and we’ll be talking about it for decades. 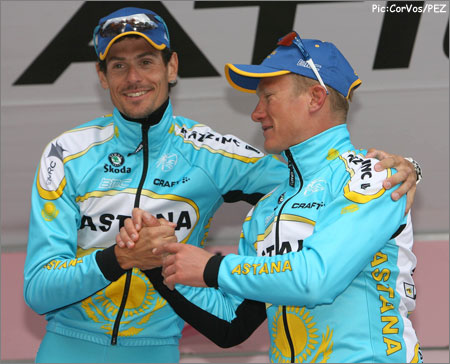 These two could light the Tour on fire…they could also make a real mess of it…so either way it’s going to be entertaining.

Apart from those two, the team is smokin strong: Paolo Savoldelli and Andrey Kashechkin are fantastic bike racers. Savoldelli is a conservative Grand Tour racer when he’s going for the win, and needs some things to go his way here and there, but as a domestique? He’s perfect for the job, absolutely perfect, and since he’s been off the bike for a week with a fever, there’s little chance of him challenging on gc. Kash will win a Grand Tour in time, and might even make it the Vuelta this year, but in the meantime, he’s another able mountain fighter. The rest are good riders in their own right and should make for a solid team front to back.

Caisse D’Epargne
The team of Alejandro Valverde goes in with of course Valverde as the numero uno and the could-be winner of the 2006 Tour, Oscar Pereiro, in his perennial position of joker. I will not say that Pereiro has any chance of winning the Tour. No. If he wins, I will do my next race in boxers and a tshirt.

Valverde is the man, but Pereiro is always lurking. His presence will be felt throughout the Tour in his attacking. He can climb too – Valverde has a huge asset in Pereiro.

Alejandro Valverde, however, will win the Tour de France. Maybe this year, probably not, but eventually. If he can stay upright, the podium is a probability, as is at least one stage win. Ed Hood agrees that the Green Bullet: “has a Tour win within him (if he can get that Puerto terrier off his trouser leg) but he hasn’t paid his Tour dues yet. He has to finish a Tour, then reach the podium, then, just maybe – win. A podium is possible for Valverde, but not the win.” I won’t go so far as to say that he won’t win, because it seems just about anything is possible these days, and Valverde winning the Tour is really not all that far-fetched. 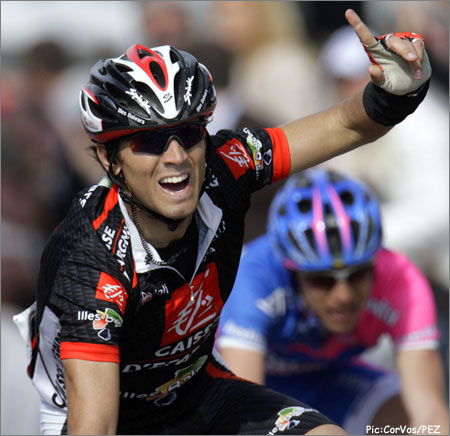 Expect a stage win or two from the Green Bullet.

As with Astana, Caisse D’Epargne has a strong supporting cast, headlined by Tour de Suisse winner and potential threat, Vladimir Karpets. Karpets is making a slow, steady rise to the stage racing elite, he just won the Tour de Suisse, so his future looks good. If Valverde crashes out and Pereiro doesn’t get lucky, could Karpets be a real contender? Most likely though, Valverde will be very pleased to have a rider of Karpets’ calibre at his side throughout the Tour.

CSC
CSC will start the Tour with an obscenely strong squad. A squad that, should Carlos Sastre ride out of his mind, can very well defend him all the way to Paris. They’ve got a perfect balance between climbers (Sastre, Schleck, Cuesta), rouleurs (O’Grady, Voigt, Vandevelde, Zabriskie, Arvesen) and just plain steamrollin tanks (Cancellara). The only person this team lacks is a true Tour de France favorite. I’d love to see Sastre really contend for the Tour, but it just doesn’t seem possible, especially with the long, flat TTs, and the not so terribly demanding mountains of this Tour de France. CSC have so many possibilities though, and Sastre is about as consistent as humanly imaginable…maybe, just maybe? Ed Hood is not so hopeful for Sastre: “not tough enough.” 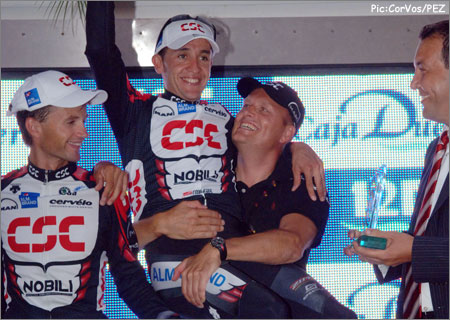 2007’s only goal for Sastre has been the Tour – he’s quietly prepped all season, and he has a dream team to back him up.

The Rest
After the three top teams, the challengers are amassed and waiting. It might not seem fair to not include Discovery as one of the three best teams with a possibility at overall victory, but I just don’t see Levi Leipheimer winning the Tour. I think a podium is well within reach, I think he’s prepared perfectly, and I think this will be Levi’s best year yet, but… 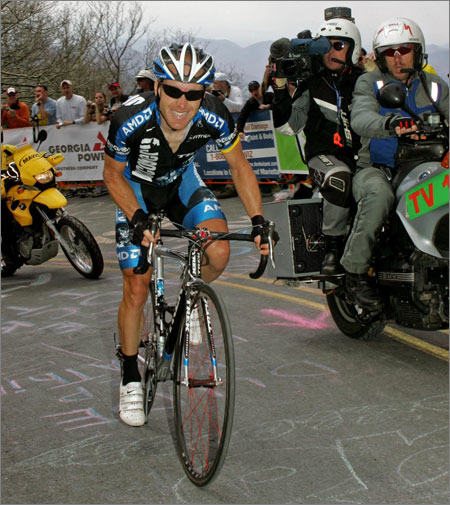 Levi Leipheimer has had a great 2007 campaign so far with wins at the Tours of California and stage5 at Georgia. He’s better than ever, and now it’s time to see just how good he can be.

The problem with these preview pieces is that you have to break it down and make an opinion, yea or nay. I think Levi could be a contender for the overall, but I just don’t think he can go toe to toe with the likes of Vino, Kloeden, Valverde, and even Sastre, maybe even Moreau. That’s not even taking into account the powerful Discovery squad, one that includes a top favorite for the White Jersey in Contador (2007 Paris-Nice winner), as well as the usual Disco Tour Suspects. 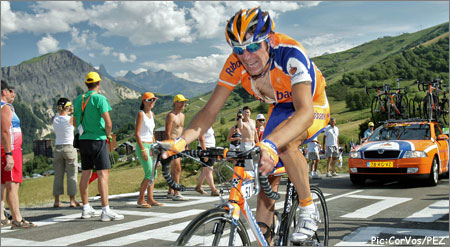 Denis Menchov is another rider with great possibilities, strong-ish time trialling ability, and goes uphill well. If he improves on last year (stage win, but faded as the Tour rolled along), he could very well vie for at least a podium spot, and if he’s made a true leap, he could be in with a chance at the overall…a small chance. Michael Rogers, in my opinion, falls somewhere in this realm. Great time triallist, competent climber, all the talent in the world…still a few years off yet…not to mention this recent talk of going back to Australia because of a knee problem? He’ll have his T-Mobile squad at his disposal, but I don’t think he’ll really threaten. 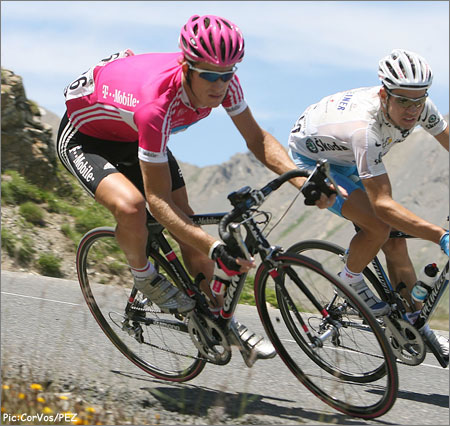 Two Outside Hopes
Christophe Moreau and Cadel Evans are my two Wild Cards. I think Cadel Evans is tough as nails and is prepped for a good run at the Tour. Ed Hood is more than in agreement: “he’s very hard to drop and will be on the podium with Kloeden and Valverde.” 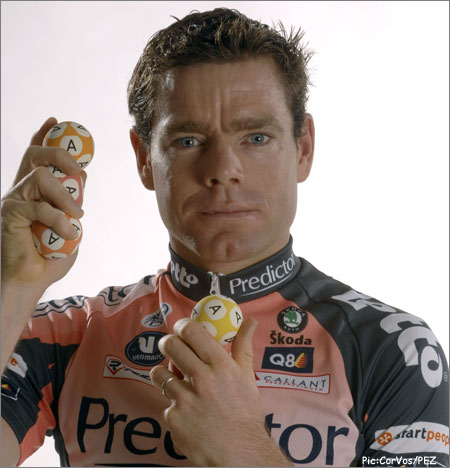 It’s cheesy, but doesn’t it seem fitting right now? As this Tour gets set to roll out on Saturday, it almost feels like a lottery picking a winner.

Moreau, however, is not to Ed’s liking: “the Dauphine isn’t the Tour.” Sure, that’s true, but this man is riding with some kind of fervor I haven’t seen in awhile. He’s absolutely on fire, and he is not scared to make the race. Along with Vino, he seems to be the only rider who might be willing to put his race on the line to win via some kind of audacious move. That should make the others a bit nervous. If he races the Tour like he did the Dauphine – his aggression can bring him BACK into contention as well if he has a bad day in the time trials (and he will). He’s dangerous right now, and he’s on the form of his LIFE – he’ll also be wearing the French National Champion colors after winning solo by over 2 minutes. 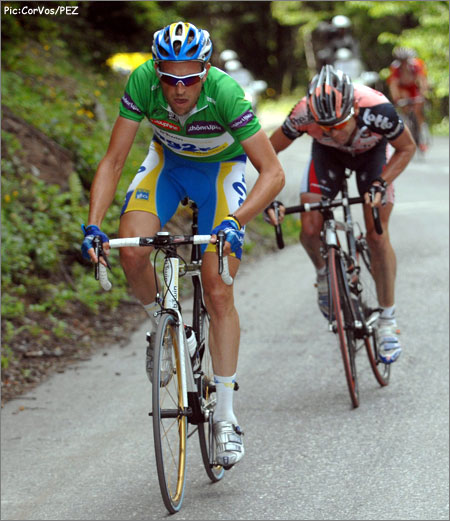 Moreau’s climbing at the Dauphine was amazing. If he can take that exact form on over to the Tour…podium…no doubt. IF being the operative term.

One thing is certain, it will be an all new winner – something the sport needs, and hopefully one that will stick.

Don’t Take My Word For It
Unibet.com is once again on the odds…it’s worth checking out their whole Tour section, the head to head match-up odds are truly intriguing, and ridiculously hard to pick. It’s like the bookies know what they’re doing or something.