PEZ Roadside Stage 15 – Le Point de Passage Oblige, the end of the neutralized section and, when Jacky Durand used to race, his favourite part of the course. It’s 09.00 and there’s a cock crowing somewhere over in the farm to our right as PEZ sets-out to take you with us over all of the 196 kilometres between Foix and Loudenvielle-Le Louron on stage 15 of the 2007 Tour de France.

It’s breezy today with the promise of some serious heat. Within a couple of kilometres we’re surrounded by giant rocky stumps, towering above the road. After 12 K we’re climbing, the second category Col de Port, wide and well-surfaced.

The organisation of the Tour is exemplary, there are two hours until race-time, but every road and farm track onto the race route is policed already. “Pas d’argent”, the words float through the Renault window from the side of the road as a mom tells junior, she has NO money – some things are the same all over the planet.

This may ‘only’ be second category, but it’s tough, the gradient changes frequently, making it very hard to find a rthym. There’s the top though, with its clutch of camper vans; 27.5 Kilometres and straight into the descent, technical and you’re in the trees if you get it wrong.

Massat at 40 k and we’re off the descent, the road is narrower and follows the river dropping gently and giving an opportunity for stragglers to get back. Saint Girons at 68 K, the “low-point” of the course, there’s a sprint here – will Tom, Robert and Erik be back-on though? Immediately the route leaves Saint Girons the trend is upwards, along a verdant valley floor, but dead ahead the skyline is spikey and threatening.

Argein, and there’s a dragon! The Rees family, all the way from Wales to suppport the only Welshman in the field, the Tour’s youngest rider, Geraint Thomas (Barloworld).

Sant Lary at 93 k and the second climb of the day begins for real, the Portet d’Aspet pass, similar to the Col de Port, wide with a decent surface up through the trees and very twisty through the village that gives the climb its name. There’s no messin’ at the top though, just like a big dipper, it drops immediately. This decent requires nothing less than full concentration as it snakes back and forth through the trees, much more technical than the first drop of the day, with bends that are very hard to read.

No sooner had I written the last sentence, than there it was – the graceful Fabiio Casartelli memorial, yes, a very dangerous decent indeed.

Just after Fabio’s memorial it begins to rise again, the Mente Pass. It’s steep from the start and, it goes without saying – twisty as heck. It’s easy to see why it’s Cat. 1 as we haul up and up.

Again, there’s no false flat, the top is the top and we’re back at the fairground as Martin thinks he’s on his Ducati as he talks me round the bends; “it’s safer because it’s wider and the straights taking you into the bends are the same length, plus all the bends are the same radii.” It straightens-out and it’s fast with less bends as the valley floor approaches.

St. Beat, and we’re back at the valley floor, the architecture is beautiful, a church perches on a rock outcrop and flowers decorate houses by the river. We stop to take pics and the old local girls want to “mother” Martin – ‘you can’t have him, girls!’ It’s flat, wide and fast again as we track the river.

Salechan, there’s the stars and bars – brakes-on! Tammy and Terry from Seattle, they’d like Disco-boy, Contador to win, or Levi, but aren’t complaining about Rasmussen; “he deserves to win; it’s our second Tour, we were here four years ago to see Lance win number five.”

Just past Salechan there’s a 90 left and we leave the wide valley floor, ahead are those mighty Pyrenees and the hors categorie, Port de Bales. There’s the sign that cheers – 19 km. to the summit! To start with it’s not too bad as the narrow road follows a gurgling stream up a cleft in the mountain side.

Narrower now and with a choppy surface and there’s nowhere for the camper vans to park. There’s a kangaroo, or is it a wallabee? I didn’t know they had them in the Pyrenees? Aussies – can Cadel win guys? “It’ll be hard now, but we hope so!”

And there’s the Danes, right next-door, will Michael win? “We think so, after the way he rode the time trial.”

We have to keep moving, or the Caravan Publicitie will be upon us; “all the best to Cadel and Michael guys, ciao.” The higher you go, the steeper it gets, the sun is blasting-down and the smell of hot tar fills the air. The valley has opened-out and it’s windy out there, as more and more Basque flags flutter at us. The top, and within one metre it drops, newly resurfaced, but nowhere to go if you run-off, just straight down the hill side – there’s zero margin for error.

Closer to the bottom it’s very fast and not as tricky but if you run-off here, it’s wings you’ll need. A demon descender could really make ground here though, as we swish through little stone-built villages.

There’s the bottom; it’s also the start of the fifth climb of the day; the Peyresourde, it kicks immediately, not unlike the bottom of l’Alpe d’Huez. It eases and gets wide after about one kilometre but it’s still tough, especially with 175 K in your legs. 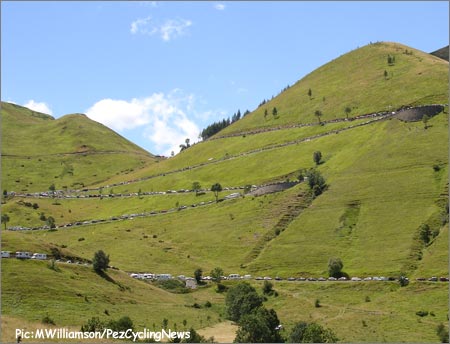 It’s relentless, up, up, up and it’s into a head wind with the sun splitting the sky. With around two kilometres to go, the road begins to slice back and forward across the hillside, it’s steep and there’s absolutely no place to hide from the sun the wind or gravity.

At the top it’s a block head wind and once again the ribbon of tar just rolls straight down the mountain. This one is open and fast until we get to the valley floor, where it gets twisty inside four kilometres to go.

Two to go and it kicks-up before dropping at the flame rouge, it’s twisty but fast all the way to around 200 to go, where it drifts left to the last 100, where it’s straight and true to the line. It’s a head wind, so leave it late!

Hours before the race arrives, the finish straight is packed.

Carmichael Sez: What Goes Up Must Come Down

Carmichael Sez: Hurry Up To Recover