PEZ Roadside Bastille Day – The Americans celebrate independence on the 4th of July… the Canadians honor July 1st, the day their country was formed… and the French go bonkers on Bastille Day, July 14th. It’s the day the revolutionaries stormed the Paris Bastille in 1789, leading to the overthrow of King Louis XVI. 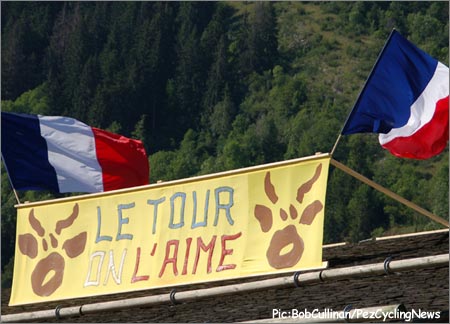 Yesterday was July 14th, Bastille Day in France, oui? The PEZ crew takes you to the finish of the first day in the mountains. A hot day for all, for sure. 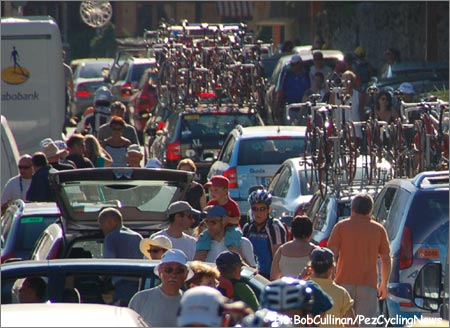 The shops are all closed, the roads are clogged, and everyone… everyone …comes out to watch le Tour roll by. 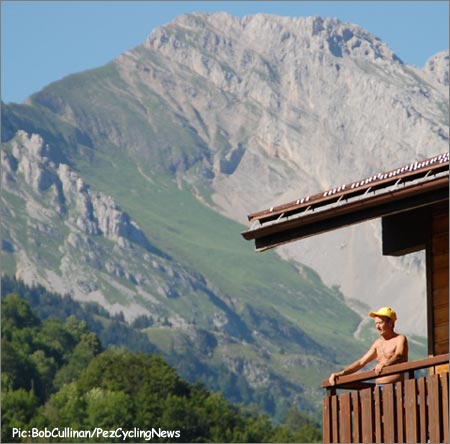 But there are some moments of solitude, away from the crowds and chaos of Bastille Day. How good is this view? This guy could see the finish line at Le Grand-Bornand from his balcony, with the mountains looming in the distance.

It’s a high honor among all French cyclists to win a stage of their Tour on Bastille Day. But a German, Linus Gerdemann, spoiled their national holiday with his win.

Even though it was not a Frenchman out front, they rationalized the ride all the same. I badgered Bernard Hinault for a comment. Hinault said, “It was a very great day, and it was a great event for all the people of France. And the French riders were competitive all day.” 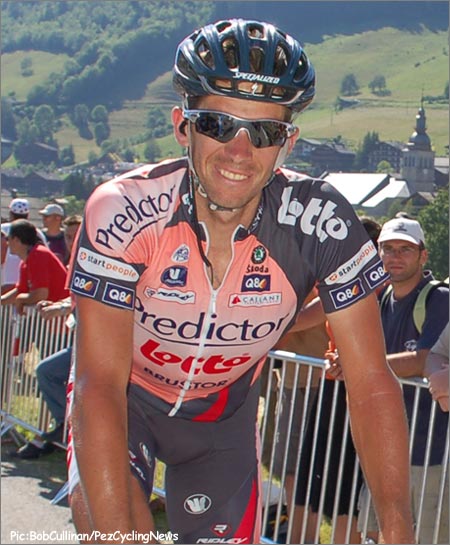 …but not competitive enough. PEZ-pal Dario Cioni gave me the story from inside the peleton, saying, “Christophe Moreau wanted to win today, because he has the French national jersey. The plan at the beginning of the day was for him to win the stage. Unfortunately, they didn’t get him into the right break, and Gerdemann spoiled the national day for the French. 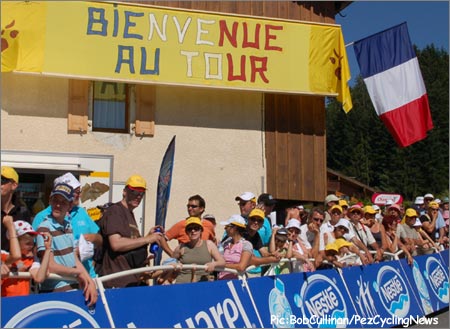 Thomas Voeckler, the darling of all France ever since he held the yellow jersey back in ’04, says that for him, Bastille Day is just another day. “For me, it’s just like every other day on the Tour, because when you’re a French rider, you’re motivated. The last three years it’s always a French rider who wins, but not today. Maybe tomorrow.” 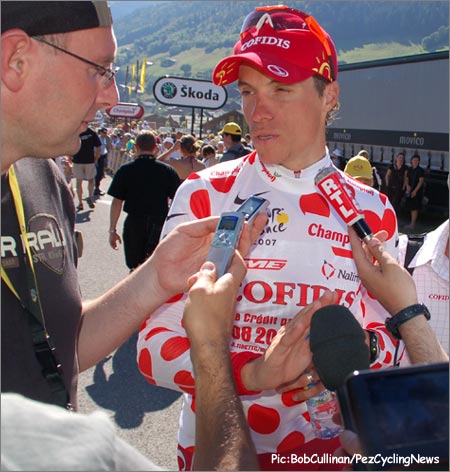 Even without a French victory today, every French rider was mobbed as he came across the line at Le Grand-Bornand… Sylvan Chavanal rode for the glory of France, taking the polka dot climbers jersey for another day. 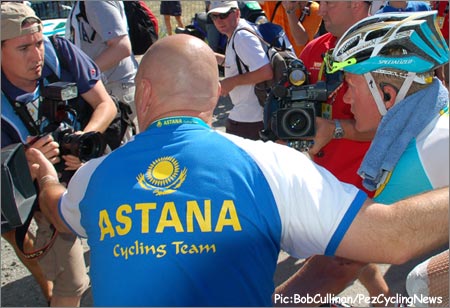 …but the biggest scrum today, as it is every day, was around Alexandre Vinokourov. It’s amazing, Vino is a more than five minutes back, he has less chance of winning this year’s Tour title than a lot of guys, and still he gets mobbed. But it’s understandable… the French love a good, long-suffering, tragic story, and Vino’s crash on Friday might prove to be the most tragic of the whole Tour. 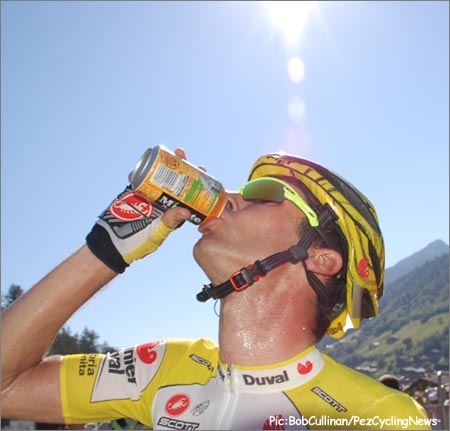 There was some big-time sufferin’ out on the road today. The first day in the Alps, the hottest day so far, and more than five hours in the saddle. C’est dommage! 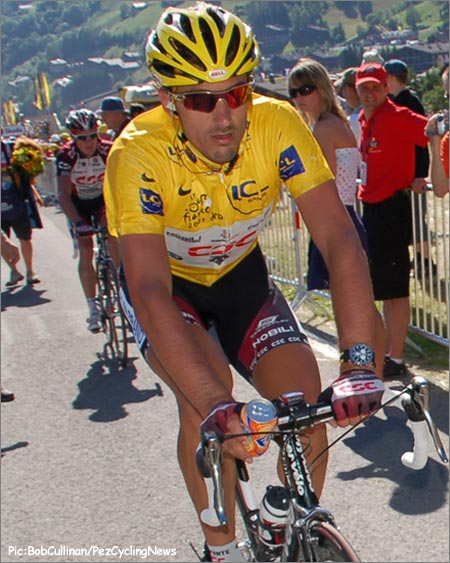 After a week in yellow, Fabian Cancellara was waaaay off the back. His days in yellow are over… Fabian is a full 22:15 behind Gerdemann, the new man in the maillot jaune. Fabian went from first to 108th. Welcome to the Alps, Fabian. 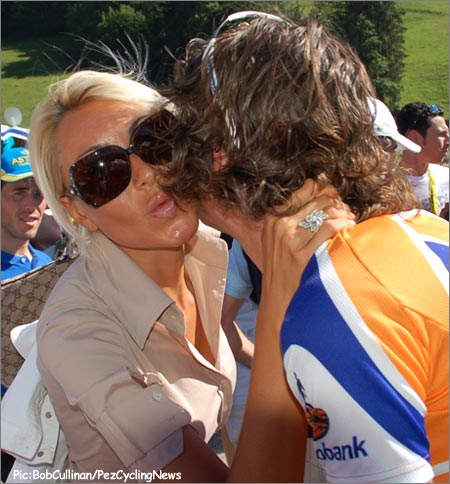 It was a tough day, for sure… but some guys got a great consolation prize after they crossed the line. Ivan Basso’s sister Elisa gives Rabobank’s Thomas Dekker a little air-kiss on the cheek… I guess a pseudo-Basso-buss is better than none at all, oui? 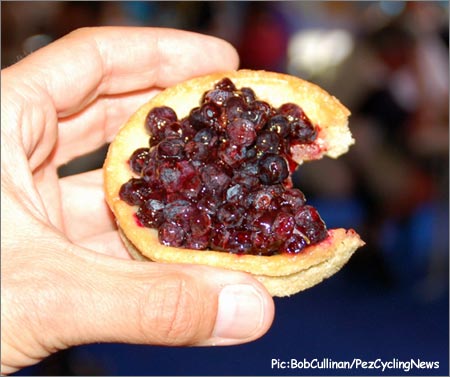 The highlight of the day for the PEZ-Crew …blueberry tarts in the press room on Bastille Day. Yum. Can we have another? 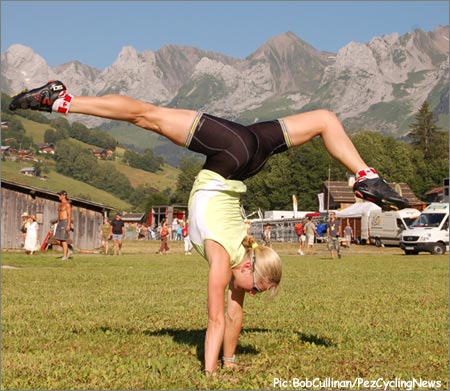 And the highlight for all the PEZ-fans… the daily handstand from Dr. Kristin. Welcome to the Alps, and happy Bastille Day, everybody. The real Tour de France started today. Tomorrow, another tough day from here to Tignes …we’ll be on the road, and in the mountains. It’s been a helluva Tour so far …a new surprise every day. We can’t wait until tomorrow.