PEZ Roadside Stage 7 – They say an Army marches on its stomach. The army of riders in le Tour continue their march across France, with food never far away. We joined the Quickstep team in the feedzone for a closer look at how a pro team serves lunch. 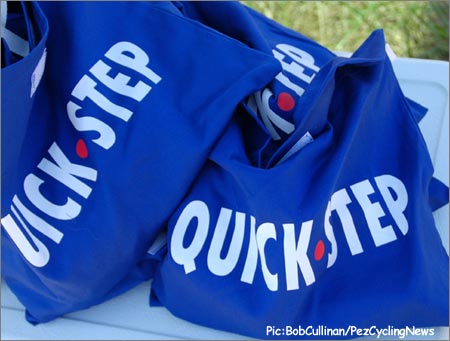 Did ya ever wonder what’s in those musette bags that are handed out every day at the mid-point of each stage? So did we… so we hooked-up with the Quick Step boys to look over their shoulders as they prepped and passed-out the lunchtime goodies. 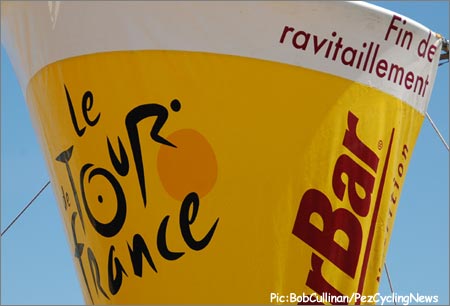 Each day, there’s a designated “ravitaillement” – feed zone – about half through the days’s route. 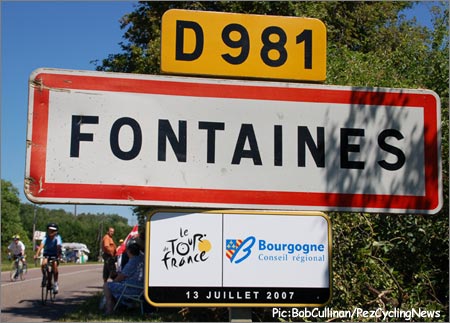 On this day, the feed zone us just outside the city of Fontaines. 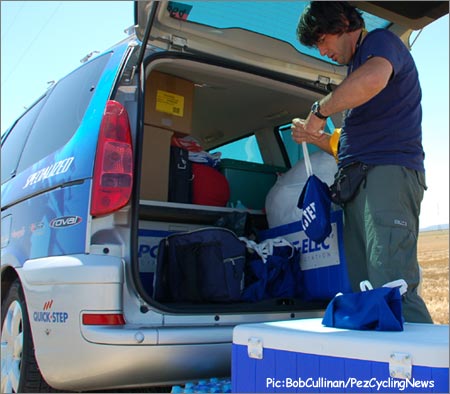 The soigneurs for each team race to the feed zone about an hour ahead of the riders, and start to assemble all the goodies that go into each bag. Every team sends a crew out to the zone to feed their riders, but every squad does is a bit different, to suit the needs of their specific guys. 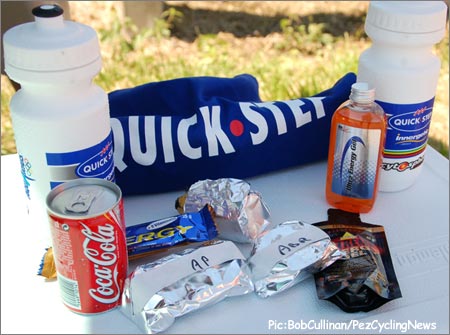 Dirk Nightengale, one of the Belgian soigneurs for Quick Step, described the contents of each bag. “There are bottles… one is carbohydrate and one bottle with a tonic. Then we put half a banana, a bar and carbohydrate jells in there. That little bottle there contains 200 calories, and we also put one little bread with banana and inside. And then another tart, like an apple tart.”

Add it all up…and it’s about 1,000 calories. Nearly half the daily intake for a normal human…a human not riding in the Tour de France. 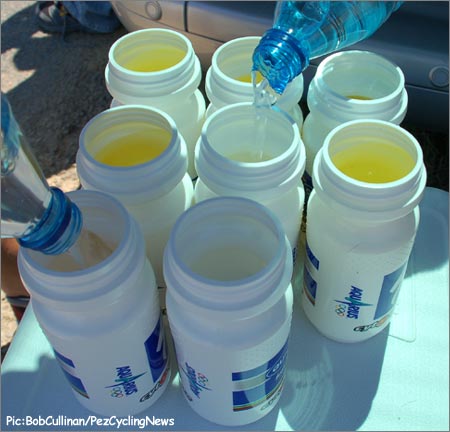 In a three-week tour, each team will use-up nearly 3,000 bottles.

Check this out… it could be one of the reasons why Quick Step has a bit of an edge. Notice how they use the bigger bottles for both of their drinks… 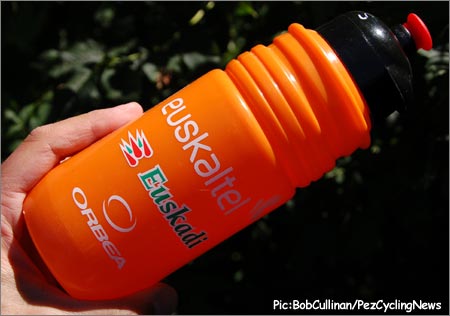 …while most of the other teams still hand-out the small bottles at the feed zone. I just don’t get it…in a long stage, on a hot day, why not give the guys as much fluid as you can at each stop? Maybe they will after they see this. 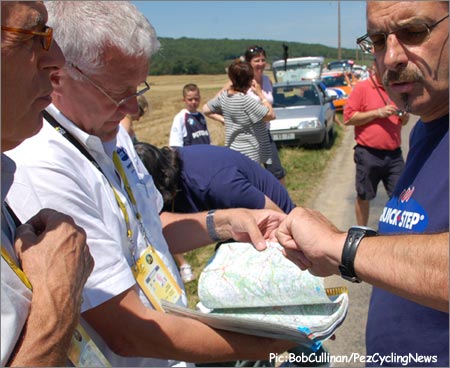 Then it’s a whole lot of hurry up and wait. Once the bottles are filled and the musettes are packed, the support staff sits around at the ready. Quick Step team manager Patrick Lefevere checks the map to see where his boys might be, while Dirk watches his watch to figure out how far away his riders are. 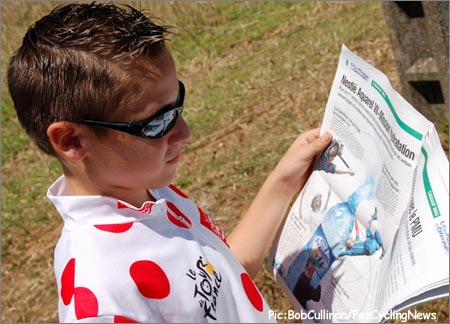 So we all wait….and wait…and wait. 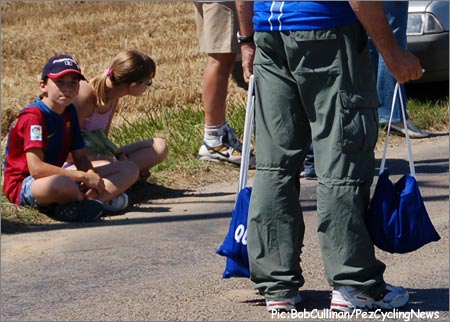 With the peleton in site, the soigneurs get in position. Eyes peeled, musettes at the ready…It’s the calm before the chaos. 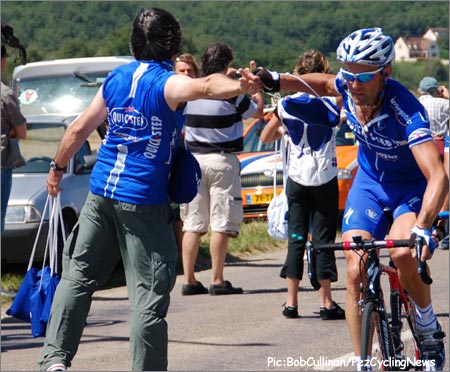 It all happens in a flash… the bags are held at arm’s length, each rider snares one as he goes by, and everybody tries not to cause a crash in the zone. 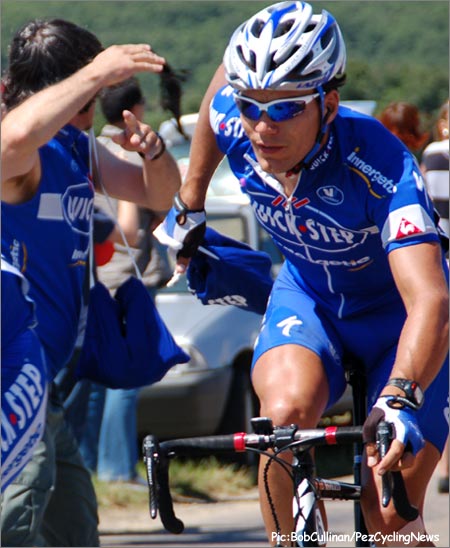 What happens if one of the guys doesn’t get his bag in the feed zone? Pas de problem. The just keep it in the team car and hustle up to the hungry rider during the race. All fair and legal.

Every rider on Quick Step grabs his own bag at the feed zone. There’s no domestique delivery for these guys. Even Tom Boonen has to pick up a musette. Dirk told me, “It’s only Armstrong who wouldn’t get his own bag… they had to take it to him. But that was just Armstrong.”

The Quick Step team is much more democratic. 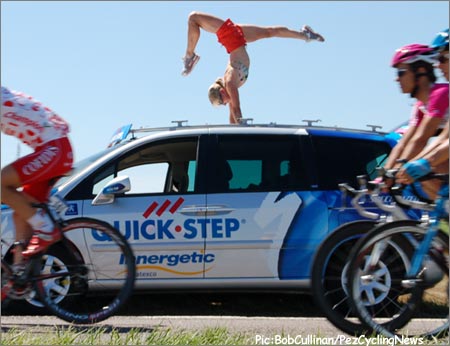 Now that everyone is well-nourished, how’s this for a parting shot? Dr. Kristin, atop the Quick Step van at the feed zone, showing us a whole new handstand pose as the polka dot jersey rolls by. Not too shabby.

The army of riders marches on toward Paris… and we bring the PEZ-fans another inside look at what it takes to keep ‘em all fed and fueled.

LeMond On LeTour: Into The Alps