PEZ Roadside Stage 3 – Tour is winding it’s way out of Belgium and into France, and today is all about the view. We’re used to seeing these parts cold and bleak for Paris-Roubaix, but the Tour has a way of warming things up…

It doesn’t look like much in the book… a long, flat stage from Waregem to Compiegne. Au contraire, mes amis. Today the Tour travels through the picture-perfect pastures and prairies of French farm county. It’s a great chance to soak-in the sights and sounds of the stage. 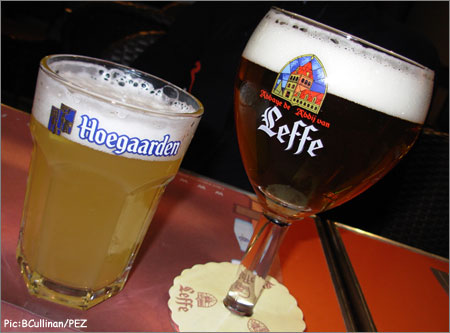 Our day actually began last night. What better way to prep for a stage start in Flanders than a couple of Belgian ales. It’s purely medicinal… it helps to calm the nerves after a pretty twitchy day of racing on Monday. 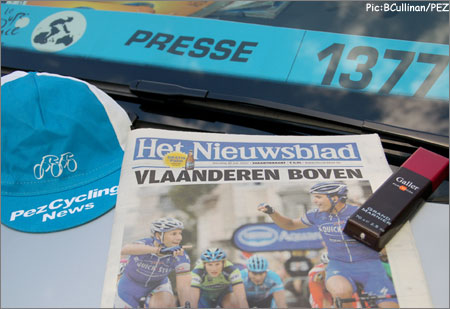 We were up and at ‘em early this morning, and piled into in PEZ-mobile just after 9:00am. We greeted the day with a little coffee, a little chocolate, and a Belgian newspaper celebrating the 1-2 finish of the QuickStep boys in Gent yesterday.

Our first stop… Tournai, Belgium. Another one of those picture-perfect, postage-stamp-sized cities along the route of the Tour. 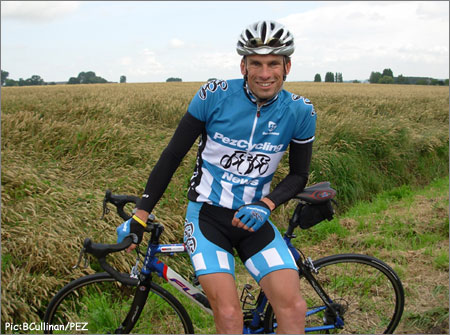 The goal was to hit the town and ride along the same roads that the big boys would be on just a few hours later. The amber waves of grain only added to the beauty of this part of Belgium. 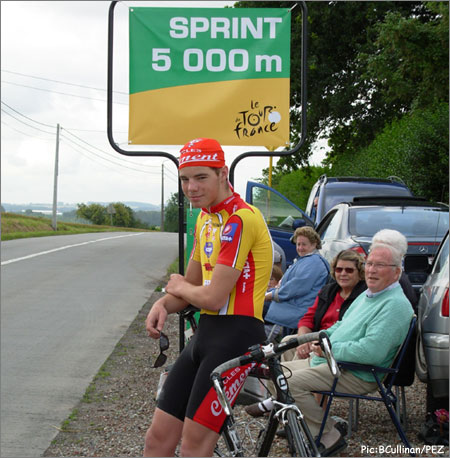 The key to watching the Tour roll through a town is to stake-out a good spot and hang there… sometimes for hours and hours… and wait for the boys to blaze on by. This guy rode the 5km out of town… the less enthusiastic Belgians opted for the casual roadside lawn chairs instead.

OK, name the first three things that come to mind when you think of Belgium. Hmmm… there’s beer… and bicycles…and… 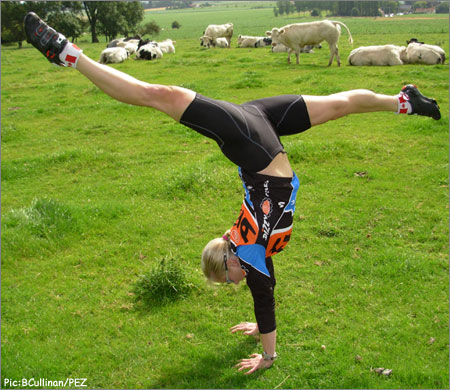 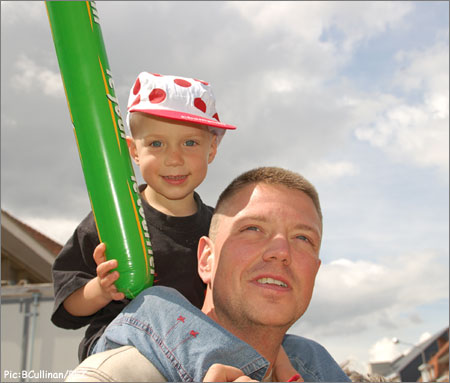 Back in town, the locals were patiently waiting for the peleton to pass through. Little Alexi and his dad camped out at the sprint spot just inside the city limits. 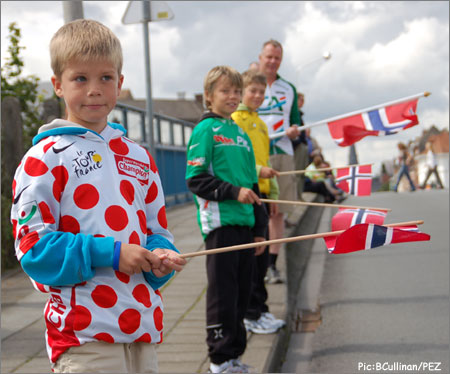 Check out the Olsen family from Norway… from left to right, Magnus, Hokon, Erik and their dad, Jan Olsen. They live close to sprint start Thor Hushovd back in Norway.

One day, Jan was biking to work, and Thor blew by him. Jan gave chase, until, as he puts it, “I start cooking under the helmet, so I had to slow down.” Jan and Thor became buddies after, and Thor gave him this sweet Credit Agricole team jersey. 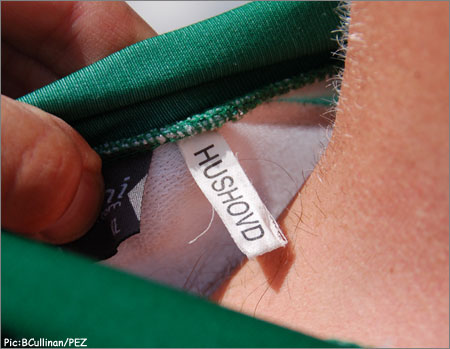 You want to know how you can tell if it’s a real team kit, and not a replica? Check for the rider’s name inside the jersey. If it’s real team-issue stuff, the name is stitched onto a little tag. 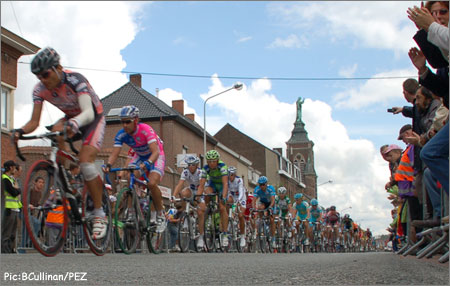 We got back at the sprint spot just in time to see Freddie Rodriguez blowing by, with most of the peleton in town. If Fred looks a little blurry, just imagine how fuzzy he feels. We thought he’d broken his collar bone in yesterday’s pileup, but after the stage today, he told me that no bones were broken, but he did need stitches to close up a whole lot of road rash gashed. He’s a tough guy, and it was great to see him out there again today. 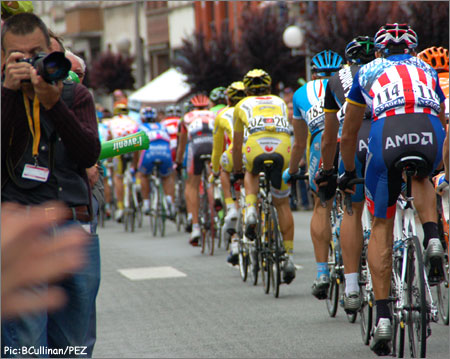 Discovery vet George Hincapie also went down in the big pile-up yesterday. But he was back on the bike today, too… you can’t miss Big George in his red-white-and-blue US Champ kit. This guy on the left probably has a helluva photo to remember for his day at the races. 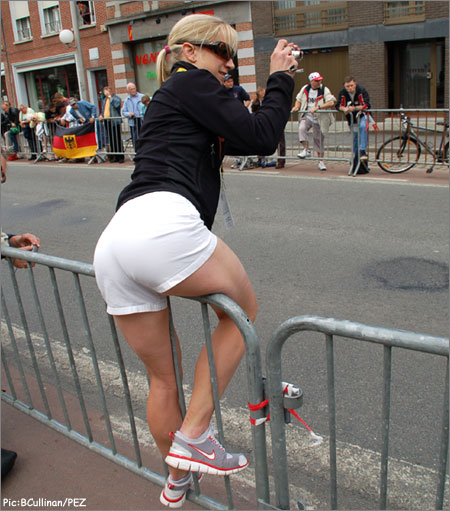 I don’t have the guts to hang my bod off the fence and stick my camera out into the racers faces. But that doesn’t seem to bug Kristin. 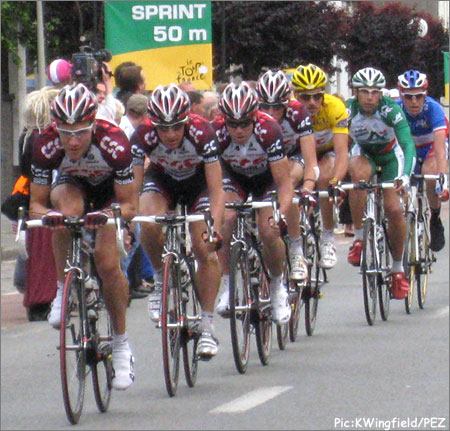 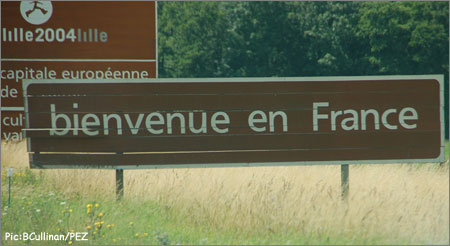 From Tournai, the route of the race wound down the road through countless other small towns and villages. We opted for the express route into France, along the A-1, all the way to Compiegne. 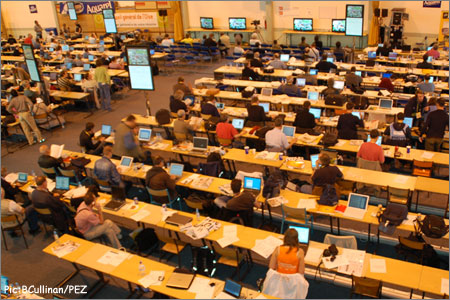 OK, here’s one of the dirty little secrets of the Tour de France. Most of the hundreds of journos who cover the Tour day after day after day never even see the race up-close. Instead, they park themselves in the vast press rooms that are set up at the finish of each stage. The watch the race on TV, get turn-by-turn updates on their PCs, and then file their stories for all to read.

That’s not really our style… we’re out there on the road every day, to bring you the real action of the Tour. 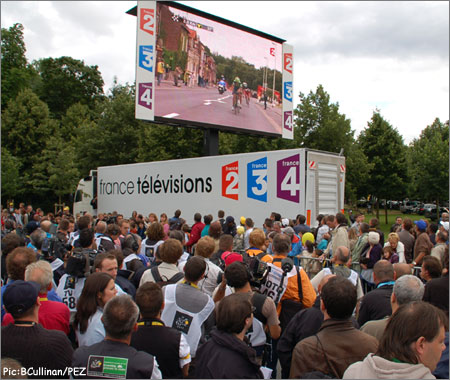 Sometimes, it’s so crazy that it’s almost comical. Witness this pack of press just past the finish line today in Compiegne. We’re all just a few dozen meters past the finish line, but we can’t really see diddly. The big-screen TVs set up for the fans are the only way that any of us can tell what’s going on as the riders sprint for the line. 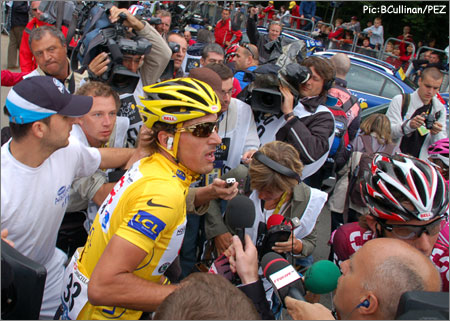 Fabian Cancellara rolled by us, and he was immediately attacked by the thundering hoard of reporters and photographers. This scrum is daily finish line fiasco… poor Fabian almost passed out from the lack of breathing room.

But it’s all good. The boys had relatively easy day in the saddle, we got to share the day’s adventures with you loyal readers, and we’re ready to roll down the road deeper into France tomorrow. 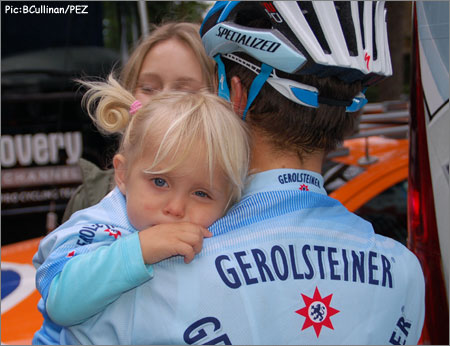 Gerolsteiner rider Ronny Scholz’s daughter has the right idea… let’s get a little shut-eye, and do it all again … from Villers-Cotterets to Joigny, we’ll bring you the best roadside reports from le Tour ’07.

It’s all about the view.