Edinburgh was freezing and London about to float away; but a warm breeze greeted us as we disembarked at Perpignan Airport at 18.00 local time. Today. My driver Martin is hustling the Renault Clio north towards Mazamet and our vital, Tour credentials.

Last year the Grande Boucle left me behind in a car park on stage 8 at Saint-Meen-le-Grand; it rolled south to Lorient, whilst I headed north east on the long road back to Fife and the post-Tour blues. Not this year; tomorrow, Martin and I will be in Albi for the crucial first time trial; then we’ll go through the Pyrenees; follow the ‘baroudeur’ and ‘sprinteur’ stages north to the chrono at Cognac in a week’s time, where the Tour will be won and lost, before the final “burst on the banjo” (copyright Dave Duffield) around those Elysean Fields in Paris. 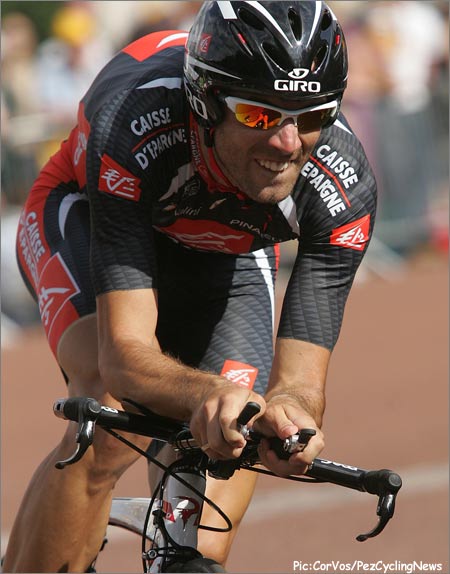 Valverde is riding his best Tour ever, can he confirm at tomorrow’s chrono?

We’ll be picking up the baton from Bob Cullian (don’t expect me to ride-up any cols though!) and trying our best to match his good work. Sunny South East England with it’s huge crowds; Belgium and Northern France and those long, slow stages with Fabian Cancellara in yellow are history now, so are the Alps.

It’s no exageration to say that the Tour starts tomorrow. The third week is where the weak falter, the “chrono-men” have two chances to blast chunks of time out of the climbers, but they have to get over the Pyrennean goat tracks within spitting distance of those waif-like climbers. 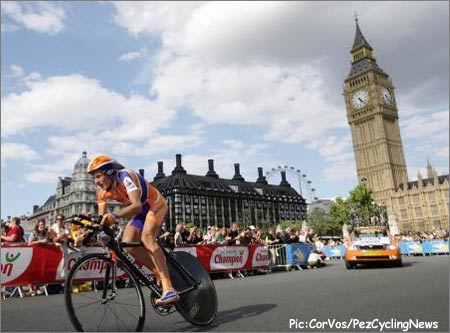 The Big Question Mark – ! Amid reports that the Flying Chicken has been working on his tt, a 166th place in the prologue isn’t exactly proof positive.

This Tour started without Basso, Landis or Ulrich and it’s none the worse for that; with good, open racing, new names aplenty and the final winner in Paris difficult to predict. Despite some slow stages the field is down from 189 riders to 168 (after stage 11) – that’s not because it’s been an easy race; those long stages up north may not have taxed the peloton, but the Alps were savage.

The man who conspired with gravity to do so much of the damage – yellow jersey, Michael Rasmussen of Denmark has two time trials to get through. Tomorrow we’ll see if a wind-tunnel-perfected position and specialist training can compensate for lack of sheer horse power and morale which must be shakey given his contre-temps with the Danish Federation over ‘d-word’ tests. 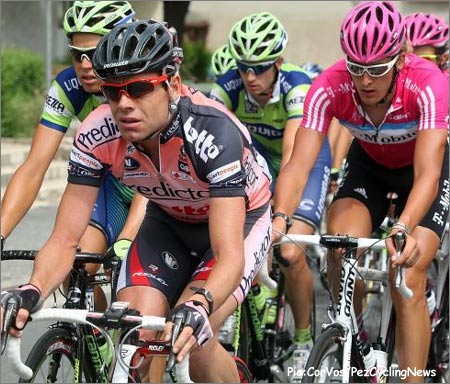 Stage 13 is surely the stage for Cadel (and the rest) to show if he’s serious.

Or, will Alejandro Valverde overcome his Tour ‘duck’ and sample that wonderful view from the podium in Paris? Is it possible the team officials will convince the politicians back in the ‘old country’ that Alexandre Vinokourov’s raw courage is remarkable, but not Tour-winning and the chips should be moved across the table to #196 – Andreas Kloden?

It may even be that the Gods smile on Cadel Evans – surely the Aussies are due a break after the untimely and painful departures of Stuart O’Grady, Michael Rogers and stage one winner, Robbie McEwen? 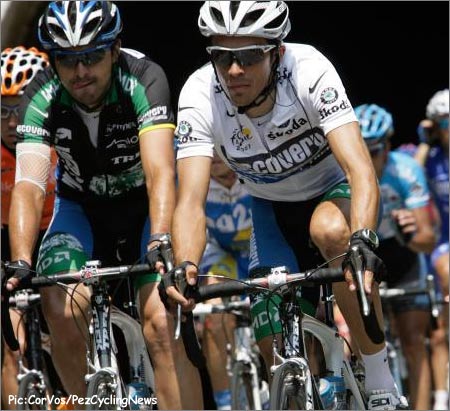 Discovery’s Contador may be thinking about trading that white jersey for something a bit more yellow if he delivers on Saturday.

Perhaps Johan Bruyneel has a Tour-winning rabbit by the name of Alberto Contador in his hat? Iban Mayo, freed of the huge weight of the Basque nation’s expectation might do what we thought he was capable of doing, back in the days when he was one of the few who could joust with Lance in the high mountains.

Whoever it is that grabs the sport’s biggest prize in Paris, we’ll be there. The bikes, the chat, what’s cool, what’s new, who’s hot and who’s not – we’ll be there to share it with you. We’re looking forward to it, we hope you are.